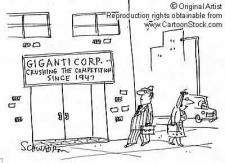 A multinational corporation (MNC) is a company that operates in more than one country. Generally, multinational corporations consist of separate companies (called subsidiaries) in different countries, all of which answer to a central office located in the firm’s home country. Most MNCs today are headquartered in the United States, Japan, or Western Europe. Examples include General Motors, Coca-Cola, Microsoft, Exxon Mobil, Sony, Honda, Royal Dutch Shell, and British Petroleum.

Companies choose to operate across national borders primarily in order to cut costs and increase profits. By expanding into multiple countries, firms gain various advantages, including increasing their customer bases and their access to lower labor and production costs. Since the 1950s MNCs have proliferated rapidly and are unquestionably one of the dominant forces in global life. The largest of the multinational corporations spend and bring in more money in a year than some small countries.

When multinational corporations move operations overseas to find cheaper labor, they eliminate jobs in their home countries. They are also able to exert enormous influence on the economies and politics of the developing countries in which they often seek to locate new facilities. Perhaps inevitably, then, many people distrust MNCs, and such companies are subjected to a wide range of criticisms.

When Did It Begin

The British East India Company, founded in 1600, and the Dutch East India Company, founded in 1602, are often called the first multinational corporations. Headquartered in England and the Netherlands, respectively, these firms were set up to trade goods such as cotton and spices over a large portion of South and Southeast Asia, then called the East Indies. These and other similar European trading companies that emerged in the following centuries gained great political power and often played a direct role in the European colonization of Asia and Africa.

During the seventeenth, eighteenth, and early nineteenth centuries, difficulties involving communications and transportation limited a firm’s ability to do business efficiently beyond the local or regional level. That began to change in the mid-nineteenth century, however, with improvements in steamship speed and the expansion of railroads and telegraph cables. These and other inventions broadened business possibilities and paved the way for the emergence of a wide range of multinational corporations. The first American multinational corporation was I.M. Singer and Company (later called Singer Manufacturing Company), which made sewing machines. Founded in 1851, Singer initially sold its machines abroad through independent agents, but in the succeeding decades the company itself gradually took over global sales, and by the end of the century it had established several foreign branches.

Multinational corporations, especially those based in the United States, began to proliferate after World War II (1939–45). Government leaders in the United States believed that future international stability depended on economic growth worldwide, not only in Europe but also in unindustrialized countries. The U.S. presidents Harry Truman (in office 1945–53) and Dwight Eisenhower (in office 1953–61) saw increased business investment abroad as a way of fighting the influence of the Soviet Union, whose socialist goals were at odds with American interests at the time (in the Soviet Union socialism entailed having the government control all economic activity).

Additionally, the plans for recovering from the war included creating the international organizations the International Monetary Fund and the World Bank, which were designed to facilitate international commerce. These helped to increase the amount of foreign investment first in Europe and then in poorer countries.

By the mid-1950s economic conditions worldwide had stabilized enough that U.S. corporations became strongly inclined to invest abroad. They built factories in other countries and established new markets for their products at a vigorous rate. Since then the growth of MNCs and of their overseas operations has increased steadily.

From the perspective of a corporation, there are a variety of motives for expanding into foreign countries.

First, there is the basic desire for growth. A company that has grown as much as possible in its home country, reaching all or most of its prospective consumers and maximizing its opportunities for profit, might be able to extend its growth and profits by setting up a subsidiary (a company that is controlled by the main company) in another country. This would enable it to develop a new pool of potential customers. Similarly, a company might decide to grow by buying up its competitors in other countries. This has the added benefit, from the company’s perspective, of reducing present and future competition.

Another motive for becoming a multinational corporation is the ability to avoid trade restrictions. When a company based in one country exports its products to another country, it often must pay tariffs (special taxes levied on imports) to the receiving (importing) country. Tariffs are meant to protect the importing country’s industries from foreign competition by increasing the retail price of foreign goods (this happens because the producer of the goods will pass its tariff costs along to the consumer). By setting up a subsidiary in the country that imposes the tariff, however, a corporation can avoid this added cost and thus price its goods more competitively.

Yet another powerful motive for setting up foreign subsidiaries is the company’s ability to take advantage of cheaper labor than may be available in its home country. For instance, in the late twentieth century many U.S. corporations moved their manufacturing facilities to Latin America, Asia, and other parts of the world where workers demanded lower wages than their U.S. counterparts.

Multinational corporations are also able to create what economists call economies of scale. An economy of scale refers to the advantages that companies obtain by expanding their operations. In general, the more units of a product a company makes, the lower the average cost of making one unit becomes. A company that expands its operations across borders mobilizes a larger supply of labor and raw materials and can increase production to levels that allow it to cut costs significantly and price its goods lower than those of competitors.

In their pursuit of economies of scale, MNCs are aided by the increased flexibility that comes from operating in many different countries. Depending on the price of labor in the various countries in which it operates, and on the nature of the products it makes, a MNC may choose one of two basic models for producing and distributing its products. It may have factories in a few locations that make its products from start to finish, or it may have factories in many locations, each of which makes separate components of the final products. A company with global reach can seek out whatever locations in the world offer it a business advantage.

As multinational corporations have become one of the dominant forces in the modern world, they have sparked a wide range of controversies.

In the late twentieth and early twenty-first centuries, the trend toward moving operations to foreign countries where labor was cheaper aroused widespread resentment toward MNCs in their home countries. In the United States manufacturing jobs almost disappeared as MNCs sought to cut costs and increase profits by locating their factories overseas. Many economists argued that the economic efficiency gained when companies cut costs would eventually balance out these job losses and produce greater wealth for the home country in the long run, but the effect on communities and regions that depended on manufacturing jobs was devastating.

In their host countries MNCs were often criticized for exerting too much control over local economies and politicians. Poor countries had to compete to attract corporations by easing regulations and eliminating taxes, and local politicians were often seen as catering to MNCs at the expense of their constituents. Many developing countries had weak economies centering on one or a few natural resources that multinational corporations wanted. MNCs were sometimes seen as exploiting these resources without regard for local customs, the environment, or human rights issues.

Many people also believe that MNCs wield an inordinate amount of influence in global politics. MNCs are among the largest donors to politicians in developed countries such as the United States (where many of the largest multinational corporations are based). They have enormous financial resources available for political donations, and they naturally use these resources with the intent of persuading politicians to pass legislation favorable to their business interests. For example, an oil company might urge the U.S. government to avoid imposing high fuel-economy standards on automobiles, because cars that use less gas, while they benefit the environment, would cut into oil-industry profits.

Defenders sometimes point out that, although multinational corporations do have influence over politicians, this is counterbalanced by governments’ abilities to regulate MNCs. Governments have the power to set the terms according to which corporations may operate. Relations between MNCs and governments, then, are not as one-sided as they are made to seem. Defenders also argue that MNCs create economic opportunities for workers in poor countries and that they pay better wages and have better environmental records than do the existing companies in most of these countries.