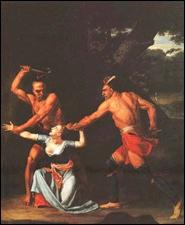 oxford
views updated
scalping The practice of removing the scalp, ‘the haire skinne of the head’, from a slain enemy as a trophy, originated in ancient headhunting. The English word ‘scalp’ is derived from the Danish skalp (shell, husk), which, like the Old Norse skalpr (sheathe), belongs to the Indo-European verb stem skel- (to cut), and is thus related to skelo (Danish: skaal, Swedish: skål), the Germanic term for ‘drinking vessel’. According to Paulus Diaconus, skelo was originally applied only to vessels made from skulls, out of which the blood of vanquished foes was drunk both in Germanic and classical antiquity. Corresponingly, in Middle English scalp still meant ‘skull’, and only after the seventeenth century did the word take on the more common and specific meaning of the ‘skin of the head’. From that point on the word ‘scalping’ was used to describe the ‘peeling’ of the skin from the head of dead and, on occasion, still living enemies, and above all to its practice among several Indian tribes of North and South America, where it served to satisfy a thirst for glory and honour or simply as a means of revenge.

Although American native peoples were all too often accused of being the sole practitioners of scalping, in reality they did nothing others had not done before. Herodotus found the practice among the Pontic Scythians, and, according to the Maccabees, the ancient Persians tore away the scalp of one of their prisoners. Orosius reports that Romans scalped during the battle on the Raudine plain. It is highly probable that Germanic tribes behaved similarly, for we know that they ascribed magical powers to a shock of human hair, regarding it as the symbol of the free man. In Germanic law, if a court demanded the guilty party's head to be shaved it was considered an especially grievous sentence — in very serious cases the court could decree that the hair be ripped out with the skin. The Vandals used this form of scalping (decalvatio) as a method of torture; several provisions of the Sachsenspiegel, the oldest and most influential legal code of medieval Germany, are tantamount to the same thing. The shaved, bald heads of prisoners in Nazi concentration camps, as well as those of bochesses (German-lovers) after the defeat of the Wehrmacht in the zones occupied by Germany during World War II, are horrible reminders of that dreadful tradition.

Outside Europe, tribes in western Siberia practised scalping into recent times, as did the Naga peoples in the Indian state of Assam and various groups in the interior of Celebes. In 1845, the British traveller John Duncan watched the Apadomey regiment of the legendary black Amazonian army pass in parade before the king of Dahomey — bearing 700 scalps as trophies. Duncan's awe-struck description of the sight has been adapted many times, most recently in Richard Fleischer's Conan the Destroyer, where Grace Jones plays a warrior woman armed with a knife and draped, as it appears, with scalps. In the Caribbean, scalp hunts were organized by runaway slaves, especially the ‘bushmen’ of Surinam, who, following African custom, used scalps for ceremonial purposes inside their fortified asylums (palenques).

Among the native peoples of both Americas, scalping was originally not widespread and was practised only rarely and on a small scale. It was only after firearms and steel knives were introduced that the taking of scalps as booty became more frequent. Even then, scalping did not become extensive until the eighteenth century, when warring European groups adopted the custom of posting rewards for scalps in order to terrorize the foe of the moment. By that time, however, it was certainly no longer merely ‘reds’ scalping ‘whites’ and other ‘reds’, but also ‘whites’ scalping ‘reds’ and other ‘whites’. In the Kansas — Nebraska War of the 1850s, ‘damn'd abolitionists’ were scalped, as were some political opponents during the 1856 presidential election campaign between Buchanan and Fremont.

The Oxford Companion to the Body COLIN BLAKEMORE and SHELIA JENNETT

SCALPING. Scalping is the removal of the skin and hair from atop the victim's skull, usually accomplished with a knife. While long believed to be a traditional Native American practice, modern apologists have argued that Europeans introduced the custom of taking scalps from slain or captive enemies in America. Nevertheless, references to Indians' scalping made by the earliest of European explorers, the elaborate methods and rituals often surrounding Indian scalping, and archaeological evidence in the form of telltale cut marks on pre-Columbian skulls indicate that scalping was a native practice prior to 1492. Various scalping traditions can be traced from Alaska to Mexico, and sporadically even into South America.

Following their entry into the New World, Europeans both adopted and encouraged scalping. During King Philip's War (1675–1676) in New England, the colonies of Connecticut and Massachusetts offered bounties for the scalps of their Wampanoag enemies. Colonial authorities would pay ten shillings to Indians and thirty shillings to non-Indians for every enemy scalp. The French in Canada appear to have been the first to encourage the scalping of whites. In 1688 they offered ten beaver pelts for every scalp—Indian or Puritan—brought to them. While Indians had practiced scalping for centuries, these bounties probably did encourage the spread of scalping to tribes who had not previously done so, or who had scalped only infrequently in the past.

Scalping and scalp bounties continued through the colonial wars of the eighteenth century, with a noticeable increase in colonists' willingness to scalp Indian enemies. During the American Revolution, British Colonel Henry Hamilton at Detroit drew the derisive nickname "hair buyer" because he encouraged his Indian allies to attack the rebels and to exchange enemy scalps for bounties. But he was not alone in the practice. South Carolina's legislature offered seventy-five pounds for male scalps, and Pennsylvania's offered one thousand dollars for every Indian scalp. Kentuckians invading Shawnee villages in southern Ohio dug up graves to take scalps for trophies. Scalp bounties and scalp-taking also took place during the War of 1812 and in the American invasion of the West. Reports of scalping cease with the close of the Plains Wars at the end of the nineteenth century.

For the Indians of the North American Plains and their neighbors to the east, those of the Great Lakes, the Eastern Woodlands, and the Gulf Coast, war was a major social tradition. Combatants in all these areas took scalps in the course of warfare, although how a scalp was taken and handled varied according to local customs. Plains Indians generally took scalps from the center of the victim's head, pulling hair and a silver dollar-sized piece of skin away after a circular incision. There are numerous instances of survival after such treatment, a reflection of the point that Plains Indian warfare was less directed at killing the enemy and more toward touching him, that is, counting "coup." Engaging an enemy hand-to-hand and then touching him while he was down but still alive confirmed a warrior's courage. Only the Teton Dakota regarded killing and scalping as the coup of highest worth. The Chiricahua Apache saw the taking of an enemy's scalp as disgusting, and declined the practice.

Germans , GERMAN Germany as a nation did not exist in minds or on the map during the early modern era. Each territory of the Holy Roman Empire of the German Na… Sudetenland , NATIONALITY AND ETHNICITY OCCUPATION POST-SOVIET DEVELOPMENTS BIBLIOGRAPHY Originally a geographic expression used for the central parts of the Sudet… Seminole , Name The name Seminole (pronounced SEH-muh-nole ) may be from the Spanish word cimmarrón (“wild one”) or from the Creek word meaning “runaway” or “lo… Pomo , Pomo Name Pomo (pronounced PO-mo ) means “at red earth hole” or “those who live at red earth hole.” The name most likely refers to magnesite (pronoun… Paiute , Paiute Name Paiute (pronounced PIE-yoot ). The name means “true Ute.” (The group was related to the Ute tribe.) The Spanish called both the Paiute an… Abnaki , Abenaki Name The name Abenaki (pronounced ah–buh–NAH–key ) means “people of the dawnlands.” The Abenaki people call themselves Alnombak, meaning “the…