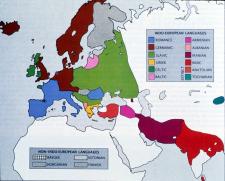 oxford
views updated
Indo-European of or relating to the family of languages spoken over the greater part of Europe and Asia as far as northern India.

The Indo-European languages have a history of over 3,000 years. Their unattested, reconstructed ancestor, Proto-Indo-European, is believed to have been spoken well before 4000 bc in a region somewhere to the north or south of the Black Sea. The family comprises twelve branches: Indic (including Sanskrit and its descendants), Iranian, Anatolian (including Hittite and other extinct languages), Armenian, Hellenic (Greek), Albanian (or Illyrian), Italic (including Latin and the Romance languages), Celtic, Tocharian (an extinct group from central Asia), Germanic (including English, German, Dutch, and the Scandinavian languages), Baltic, and Slavic (including Russian, Czech, Bulgarian, and Serbo-Croat).

Esperanto , BIBLIOGRAPHY Esperanto was intended as an international language, a language of wider communication to exist beside local and national languages, and… Anatolian Languages , Anatolian languages (ăn´ətō´lēən), subfamily of the Indo-European family of languages (see The Indo-European Family of Languages, table); the term "A… Pashto , Pashto (Pushto) One of the two major languages of Afghanistan, the other being Persian. Pashto is spoken by about 12 million people in e Afghanistan… Armenian Literature , Armenian language, member of the Thraco-Phrygian subfamily of the Indo-European family of languages (see Indo-European). There is evidence that in an… Norwegian Language , Nor·we·gian / nôrˈwējən/ • adj. of or relating to Norway or its people or language. • n. 1. a native or national of Norway, or a person of Norwegian… Sabir , SABIR [From Portuguese sabir to know]. A name for the original LINGUA FRANCA, the earliest known PIDGIN based on a European language. Its vocabulary…