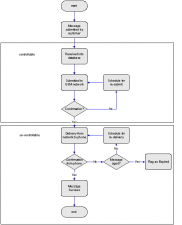 Service Level Agreements (SLAs) are written contracts between a service provider and its client guaranteeing a certain minimal level of service. For instance, Internet service providers (ISPs) may devise SLAs guaranteeing continuous, high-quality Internet access to their subscribers, while applications service providers (ASPs) may offer SLAs to secure the efficient operation of high-tech business applications to corporations. SLAs set the parameters for technical support, access levels, business services, recovery protocols, and other standards of service. Usually, this quality of service is secured with the threat of substantial financial penalties levied against the carrier for allowing service to lapse below that minimal level by, say, failing to quickly address and remedy service outages.

The technical requirements of conducting business in the Information Age are such that many corporations chose to outsource portions of their information systems to the management and care of application service providers (ASPs). However, there was obviously a great deal of risk involved in such movements; for instance, by contracting with an ASP, companies give up day-to-day control of their own systems, thus losing control over whether those systems will be run correctly or in accordance with their best interests. Communication between companies, moreover, is more complicated than communication within companies, and thus problems that arise with systems and applications maintained by an ASP risk not being addressed in the time or fashion the company might prefer. In such cases, SLAs are a method of alleviating fears, providing a mechanism of assuring businesses that their strategic and technical objectives will be met.

In the early 2000s, SLAs were characterized by their increasing toughness. The ability to point to a stringent SLA agreement was a selling point in itself for network providers as consumers were less willing to stomach even short-term lapses in service. As a result, many SLAs levied heavy penalties for even brief service outages, forcing providers to beef up their systems and to prioritize their chain of responses to system problems. SLA penalty clauses serve a dual function. On the one hand, they provide an incentive to the provider to make sure that certain standards of service are maintained via the threat of financial vulnerability. On the other hand, in the event that the provider fails to meet its requirements, they ensure compensation so as to mitigate the losses incurred by the client.

Carriers were thus turning SLAs into more than simple prerequisites to attracting customers, but into valuable marketing tools. With a strong SLA to sell itself, a carrier is able to charge higher fees for its guaranteed service levels. Moreover, carriers can use the SLA as a springboard for differentiating themselves from competitors by offering different levels of performance for different services, at varying costs, thereby expanding the customers' options. SLAs thus provide a combination of carrot and stick incentive for carriers to institute the best possible service.

ISPs spent the early 2000s trying to trump each other's SLAs by rolling out newer, tougher service guarantees. For instance, in winter 2001 Cable & Wireless rolled out a new SLA promising its subscribers no more than 55 milliseconds of round-trip latency, topping AT&T's earlier guarantee of no more that 60 milliseconds of latency. For the average user, such differences aren't likely to amount to much, but for businesses tiny increments such as these are often worth investigating against their costs. ISPs usually bind themselves to their SLAs by offering one-day service credits when the conditions of the SLA aren't met. Other conditions included in SLAs often include financial penalties for each minute that service is curtailed.

Some analysts claim, however, that SLAs aren't quite the panacea that they seem to be, since enterprises that contract with carriers usually have little recourse in the event the carrier reneges on its service guarantees. As a result, such arguments run, SLAs are more likely to act as a general expectation of service quality than as an iron-clad promise. Moreover, the guarantees embedded in SLAs aren't particularly objective; each carrier devises its own measurement criteria, so that outside of obvious violations such as prolonged outages, the degree to which the carrier lives up to its SLA requirements is generally quantified by the carrier itself. To remedy this problem, SLA-verification tools were rolled out in the early 2000s and were turning into a healthy industry in their own right. Such tools usually came in the form of software designed to measure certain elements common to SLAs.

Another complication of SLAs is that a single operator often doesn't control the entire service delivery path. In such cases, the lack of enforcement assurance for SLAs could render them functionally inoperative. For instance, a company may contract with an outside host for it's e-commerce Web site, and that host may institute a comprehensive SLA of its own guaranteeing a certain level of service. But if, as is often the case, the company accesses that site by way of another provider, the SLA with the Web host is rendered virtually meaningless. What was emerging in the early 2000s, then, was a business environment characterized by layers of SLA agreements.

The negotiations between providers and clients during the course of drawing up an SLA draws attention to those issues that are covered and opens a dialogue about just what is expected, thereby improving the chances that those service levels will be addressed. The provider, in this way, comes to understand which services are of the highest priority to the client. Finally, a provider is more likely to pay close attention to areas of service that are likely to be measured to ensure that the SLA requirements are met.

Ultimately, however, SLAs are a natural outgrowth of an industry environment that, while increasingly necessary, is extremely unstable and provokes a great deal of uncertainty and hesitation in the business world. Thus, the future of SLAs in the early 2000s was uncertain. While they were becoming increasingly common, the basic reasons for SLAs were a condition of the immaturity of the telecommunications firms, ISPs, and ASPs in handling their services for subscribers and enterprise clients. As the sophistication and reliability of these services develop, the uncertainty underlying the SLA contract will likely disappear. The survival of SLAs, according to analysts, was most likely to be found in their ability to evolve into a value-added vehicle for communicating with clients and differentiating providers from their competitors.

oxford
views updated
service level agreement (SLA) An agreement between the supplier of a service and the users of that service that sets out the levels of service that will be offered, preferably in quantitative terms, and the obligations on the user of the service. A typical agreement for a computing service or network service will set out the expected levels of service measured in terms of one or more of the following: availability, fault reporting, recovery from breakdowns, traffic levels, throughput, response times, training and advisory services, and similar measures of the service quality as seen by the end-user. The agreement will also set out user costs and charges, the provision of access to premises for service contractors, and standards of training to be achieved by users. The agreement may form part of a legal contract, yet is equally likely to be found within a single large organization where one unit within the organization offers services to other units, but where a legally enforceable contract would not be appropriate.

A Dictionary of Computing JOHN DAINTITH