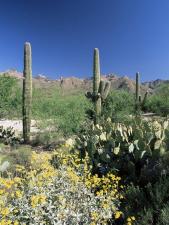 The members of family Cactaceae are a group of dicotyledonous flowering plants that are primarily native to various dry or seasonally dry habitats in North and South America. Due to the presence of specialized fleshy stems, they are classified as stem succulents. Leaves are not produced in most species, although there are some leafy species in a few genera. There are more than sixteen hundred species of cacti, which are contained in approximately one hundred genera. All cacti share the unique morphological features of having most, if not all, of their secondary stems condensed into structures called areoles. These are the places on the stems from which the spines develop. Spines are modified leaves that have become hardened and sharp, thereby providing protection for the plants from herbivores in addition to providing some shade to the stems.

The plant body of a typical cactus is composed of one or more stem segments that are succulent—that is, having water storage tissue (parenchyma) in their central portions—and a photosynthetic outer skin that is covered by a thickened epidermis and a thick layer of waxy cuticle . At various places upon these stem segments are areoles from which both spines and flowers arise. In some columnar and barrel cacti, the stems have developed ribs that assist the plant by providing more surface area to encourage heat loss, to accommodate rapid stem diameter increases following up-take of large amounts of water during rare rain events, and to provide shade in some species. Almost all cacti are xerophytes and have evolved adaptations to conserve water that is typically scarce in the habitats they occupy. These anatomical adaptations, in addition to the evolution of crassulacean acid metabolism for carbon fixation, have enabled the cacti to flourish in otherwise inhospitable habitats. Some cacti have even become geophytic, with the largest portions of their biomass below ground, where they store water in enlarged roots; the aboveground photosynthetic stems are small by comparison.

Cacti are widely distributed throughout both North and South America, having maximal centers of diversity in the Sonoran and Chihuahuan Deserts of North America, the central Andean region (including Chile, Argentina, Bolivia, and Peru), and the dry scrub forests of eastern Brazil (the Caatinga) in South America. In many habitats, cacti play an important role in the ecology of the region and are often a major component of the arid zone flora in New World deserts. Nearly all forms of animal-mediated pollination syndromes are found in the cacti, with insect (bee and beetle), hummingbird, hawkmoth, and bat pollination types found in species from both North and South America. This accounts for the wide range of variation in floral morphologies seen in various groups of cacti throughout their range.

Classification of the cactus family is considered to be highly problematic and difficult due to the effects of convergent or parallel evolution. Systematic studies have shown that there are four major lineages of cacti that are recognized at the subfamily rank. Of these, the two primitive groups (Maihuenia [two species] and Pereskia [sixteen species]) are found mainly in South America and have persistent true leaves, a limited degree of succulence, and are not as well adapted to heat and water stress as are members of the two remaining groups, the subfamilies Opuntioideae and Cactoideae.

The Opuntia group has approximately three hundred species of cacti or more, and typical members of subfamily Opuntioideae have well-defined stem segments, an unusual kind of specialized seed structure, and a unique type of reverse-hooked small spines (glochids), which penetrate the skin and are easily dislodged from their attachment points in the areoles. These cacti include the prickly pears and chollas (pronounced CHOY-yas), which produce showy flowers that are often pollinated by bees, and develop fleshy (occasionally dry) edible berries called tunas. This group is the most widespread of any in the Cactaceae, ranging from southern Canada southwards almost continuously to the cold habitats of Patagonia in southernmost Argentina. They are found from sea level to high elevation (4,000 meters and higher) and have adapted to a wide variety of habitat types. Species of Opuntia introduced into suitable habitats in Africa and Australia have become noxious invasive pests, and removing these escaped cacti has become an significant ecological concern.

The largest subfamily of the cacti (subfamily Cactoideae) contains approximately thirteen hundred species and provides examples of extreme morphological variation in the family. There is a tremendous range of variation in spine form and color, flowering types, formation of ribs and tubercles, and other morphological characters in members of this subfamily. Plants in this group range from plants with narrow upright stems that sometimes branch (a columnar habit) to plants with globular or ball-shaped forms (the barrel cactus types) to epiphytic plants that either hang from trees in a pendant fashion (such as in Schumbergera or Rhipsalis ) or are lianas and climb up the surfaces of trees with a vining habit. The most easily recognizable cactus species, the saguaro (Carnegiea gigantea ), is the state flower of Arizona and the symbol of the American desert. It is also among the tallest of all cacti, with individual plants recorded over 15 meters (50 feet) in height. Some cacti produce special alkaloid compounds , notably the peyote cactus (Lophophora williamsii ), which is known for its hallucinogenic properties.

Due to their extreme morphological diversity and their ability to tolerate a wide range of growing conditions, the cacti have received much interest by horticulturists since they were first brought to Europe by Christopher Columbus in the 1490s. The Indian fig, or Opuntia ficus-indica, is now widely cultivated throughout the Mediterranean region and in other places for its tasty and sweet multiseeded berries. Other species of cacti are grown for food for humans: nopales/nopalitos are young Opuntia stems, while the dragon fruit favored by southeast Asians is the berry of an epiphytic cactus, Hylocereus undatus, originally from Central America. Perhaps the most widely grown cactus is also an epiphyte, originating from mountainous regions in south central Brazil. The Christmas cactus (Schlumbergera, or Zygocactus truncata ), often sold during holiday times in winter, is a freely flowering epiphytic cactus that was selected for its showy flowers and ease of cultivation. Tens of thousands of cactus horticulturists around the world collect a wide variety of cacti as a hobby, and a number of international and national societies have been established to promote the understanding, cultivation, and conservation of cactus species.

Pampas Grass , pampas grass Species of tall, reed-like grass native to South America and widely cultivated in warm parts of the world as a lawn ornamental. Female p… Wrens , Wrens Species of wrens Wrens and humans Resources Wrens are about 60 species of small, restless perching birds in the family Troglodytidae. Species o… Legume , Legumes or beans are species of plants in the family Fabaceae (also known as Leguminoseae). The legume family is very large, containing about 12,000… Ericaceae , Heath Family (Ericaceae) The heath family, or Ericaceae, contains about 100-125 genera of vascular plants comprising 3,000-3,500 species. These plant… Bamboo , Bamboo Bamboos are members of the grass family (Poaceae). Like other grasses, bamboos have jointed stems, small flowers enclosed in structures known… Tumbleweed , The true tumbleweeds are various species of herbaceous plants in the amaranth family (Amaranthaceae). These are usually annual plants that develop a…