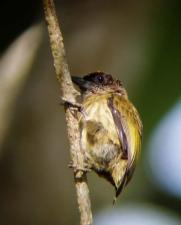 oxford
views updated
Picidae (piculets, woodpeckers, wrynecks; class Aves, order Piciformes) A family of small to large, black, white, yellow, red, brown, or green birds, some of which are crested and many of which have yellow or red on the head. Most have long, stout bills, used for drilling holes, and long, fine tongues used for feeding. Their wings are short and rounded, and their tails are usually wedge-shaped with stiff feather shafts. Piculets (about 25 species of Picumnus of which one occurs in south-east Asia and the remainder in S. America) have short bills not used for drilling and tails that do not have stiffened shafts. Their legs are short, and their feet are zygodactylous with three or four toes. Picoides, comprising typical woodpeckers, is often split by retaining in that genus the two three-toed species and placing the 31 four-toed species in the genus Dendrocopos. Woodpeckers are arboreal, climb tree trunks for insects, fruit, and sap, and nest in tree cavities, banks of earth, and termite mounds. The 15 species of Picusare arboreal but many feed on the ground on ants. The two species of Jynx(wrynecks), of Europe, Africa, and Asia, are cryptically coloured and rarely cling to trees (J.torquilla, common wryneck, is highly migratory). The 21 species of Melanerpes, mainly black and white, most of them with red crowns and rumps and white or black, barred, central tail feathers, occur only in America. There are 27–35 genera in the family, and about 200 species, found world-wide.

Estrildidae , Waxbills or weaverfinches are 129 species of finchlike birds that make up the family Estrildidae. Species of waxbills occur in the tropics of Africa,… Paridae , Paridae (tits, chickadees; class Aves, order Passeriformes) A family of small, active birds which are blue, olive, brown, or grey above, and white, y… Honeyeater , honeyeater or honeysucker, common name for arboreal birds comprising some 160 species of the family Meliphagidae, and found in Australia, New Zealand… Babbler , Babblers are small- to medium-sized passerine (perching) birds characterized by soft, fluffy plumage, strong, stout legs, and short rounded wings. Th… Sandgrouse , Pteroclidae (sandgrouse; class Aves, order Columbiformes) A family of medium-sized birds which have brown and grey, barred, spotted, and mottled uppe… Bee-eater , Bee-eaters Bee-eaters are about 24 species of birds that make up the family Meropidae. Bee-eaters occur in open habitats and savannas of the south-te…