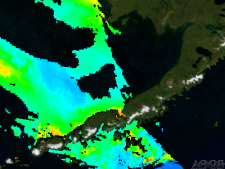 PRIBILOF ISLANDS. The Pribilof Islands, in the Bering Sea, were first visited in 1786 by the Russian explorer Gerasim Pribylov. The islands were ceded to the United States by Russia at the time of the purchase of Alaska in 1867. As the summer breeding grounds of the largest known herd of seals, they became the subject of a controversy between the United States, Great Britain, and other nations whose subjects were slaughtering the seals for their fur. In 1869 the U.S. Congress passed a law restricting the sealing. An American cutter seized Canadian vessels engaged in pelagic sealing in 1886. The British government vigorously protested, and an arbitration tribunal, agreed to in 1892, decided against the United States in 1893. The dispute was finally settled in 1911 by the North Pacific Sealing Convention between Great Britain, Russia, Japan, and the United States. The United States was given the right to regulate the killing of the seals, and the herd increased from a low of 127,000 in 1911 to more than 2.5 million in the 1960s. Japan withdrew from the convention in 1941, during World War II.