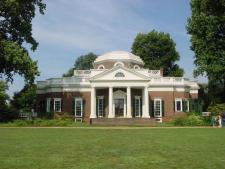 MONTICELLO (constructed between 1769 and 1809) was designed and built by Thomas Jefferson to be his home, farm, and plantation. Construction progressed through two stages, the first beginning in 1769, and the second in 1796, after Jefferson's presidency and travels in Europe.

Altered throughout most of Jefferson's life, the brick house embodies the ideals of the American Enlightenment, as well as the moral, aesthetic, political, and scientific motives of its designer. Located southwest of Charlottesville, Virginia, and surrounded by thousands of acres devoted to agriculture and industry, the house was built on the leveled summit of "Little Mountain." More than one hundred enslaved African Americans and paid laborers supported the cultivation of elaborate vegetable gardens, a variety of crops and livestock, fruit trees, a vineyard, and a terraced, picturesque garden. Twenty-six years old when Monticello was begun, Jefferson pursued an urbane, aristocratic, and educated life in this rural setting, where he was inspired by his study of ancient Roman architecture, the writings of Pliny, and the neoclassical villa architecture of Andrea Palladio. The orderly landscape, carefully arranged shops and outbuildings, and the balanced planning of Monticello's interior spaces demonstrated Jefferson's belief that architecture must be both practical and symbolic, a visible instrument of a new nation's purposes. Monticello reflects both the private country gentleman's family and the plantation's social structure.

Choosing the scenic mountaintop for his plantation house, Jefferson made clear his understanding of how a house and its natural landscape interact. From 1768 onward, Jefferson worked out the plan, elevations, materials, and details of his house in numerous ink on laid paper drawings. By 1770, the site was cleared, lumber was prepared, and bricks were made to build a small brick house (still standing), shaped after regional vernacular buildings. By 1771, the general plan of the main house and its dependencies had been drawn, derived from typical plans for country villas in Robert Morris's Select Architecture (1757), an illustrated volume in Jefferson's substantial collection of architecture books. Monticello's cruciform plan, balanced proportions, and classical ornamental details demonstrate Jefferson's familiarity with the prevailing architectural

aesthetic derived from the sixteenth-century Italian architect Andrea Palladio. Seeking constant refinements and originality, the eclectic Jefferson combined his own sense of practicality and beauty with Palladio's use of the Doric and Ionic orders, pedimented roofs, and classical proportions, all of which Jefferson had studied in Palladio's Four Books of Architecture (1570). This earliest phase of Monticello featured a double portico, one of Palladio's most well known classical elements.

For classical details, Jefferson turned to James Gibbs's Rules for Drawing the Several Parts of Architecture (1738). The classical Roman villa and the cultivated lifestyle of its inhabitants occupied Jefferson's imagination, fostered as well by his study of Pliny, whose description of ancient Roman interiors, cultivated landscapes, and villa architecture informed American Palladianism. Jefferson brought his wife to Monticello in 1772, and the house's construction continued for the next ten years under the direct supervision of its architect. In designing the various public and private spaces, Jefferson unified beauty and function. The untimely death of his wife in 1782, and Jefferson's departure to Paris in 1784, ended this first phase of construction.

In France, Jefferson immersed himself in French neoclassical studies, acquired important architecture books, and visited ancient Roman sites in France and Italy. His fascination with numbers and precise measurement is reflected in his writings and travel sketches. The authentic Roman buildings tempered Jefferson's attachment to Palladio and, for solving the practical household needs at Monticello, Jefferson also carefully studied French domestic architecture. In particular, he was impressed by the Hotel de Salm, a modern townhouse combining neoclassical order and modern rational planning. When Jefferson resumed construction at Monticello in 1796, the second phase of design showed dramatically the impact of Roman antiquity, Palladio's villas, French neoclassicism, and his visits to English country houses, especially Lord Burlington's Chiswick House (1725) near London. Palladio's Villa Rotunda, near Vicenza, was memorable for its centralized plan and dome. Monticello's two-story portico was replaced by a low octagonal dome, and the dependencies were drawn horizontally across the site to emphasize the much-desired view of the surrounding Blue Ridge Mountains. Monticello was mostly finished by 1809, when Jefferson retired from his public life, but Jefferson continued to tinker with his dwelling until his death in 1826.

McLaughlin, Jack. Jefferson and Monticello: The Biography of a Builder. New York: Holt, 1988.