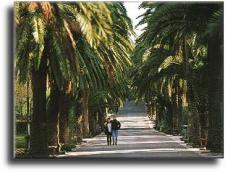 Guzzoni's Sixth Army of 200,000 Italians plus 30,000 Germans. A counterattack at Gela was quickly contained, and the beachheads were secured.

Montgomery advanced through Syracuse and Augusta to Catania in order to seize Messina. Patton was to protect his flank, but he obtained permission from Gen. Harold Alexander, the Allied ground commander, to extend westward toward Palermo. On 22 July he took the city. Montgomery was halted by strong defenses before Catania.

On 25 July in Rome, Benito Mussolini was deposed and imprisoned. Marshal Pietro Badoglio, the new Italian leader, soon sought terms of surrender. The Germans assumed control of Guzzoni's defense force, and by August the Axis effort in Sicily became a delaying action to cover an orderly withdrawal to the mainland. Axis troop withdrawal from Sicily started 11 August. Meticulously planned, the operation successfully transported about 125,000 men to the mainland.

With Patton already in Palermo, Alexander gave him permission, on 25 July, to advance on Messina. Thus began a contest between Montgomery and Patton to reach Messina. Launching three amphibious end runs to help his forces forward, Patton entered Messina first on 17 August. However, it was soon revealed that he had slapped two soldiers hospitalized for combat exhaustion. The unfavorable publicity marred his Sicily triumph and almost ended his military career.

Garland, Albert N., Howard M. Smyth, and Martin Blumenson. Sicily and the Surrender of Italy. Washington, D.C.: Office of the Chief of Military History, Department of the Army, 1965.