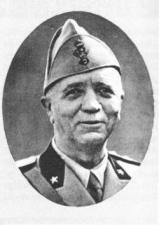 Pietro Badoglio was born in Grazzano Monferrato. He graduated from military academy in 1890, served his first campaign in Africa from 1895 to 1898, and was attached to the general staff in Rome as a captain in 1906. An intelligent, though tough and taciturn, officer, he gained battlefield promotion to major in the Libyan campaign in 1911-1912. With the outbreak of World War I, he became a lieutenant colonel of the general staff. Defying the stationary warfare that ensued, Badoglio brilliantly broke through the Austrian lines in 1916, conquered Mount Sabotino (Gorizia), and brought a much-needed victory to Italy. Battle promotions to the top military hierarchy followed. As major general and assistant chief of general staff, he distinguished himself further, both in Italy's recovery from disaster in 1917 and in the crushing of Austria in 1918. Badoglio then headed the armistice commission and negotiated the Austrian surrender.

A senator and chief of army staff in 1919, Badoglio was appointed successively ambassador to Brazil in 1924, chief of general staff in 1925, field marshal in 1926, and governor of Libya in 1928. In 1929 he was ennobled as the Marchese of Sabotino and was awarded the highest Italian honor, the Collar of the Annunziata.

When the Fascist government bungled the early Ethiopian campaign in 1935, Mussolini hastily appointed Badoglio supreme commissar, and he achieved a rapid, total victory in 1936. Although promptly named viceroy of Ethiopia and titled the Duke of Addis Ababa, Badoglio preferred to return to Rome, the center of activity, rather than remain isolated in Africa. A Royalist rather than a Fascist soldier, a suspicious, calculating politician as much as a military professional, he remained aloof from Benito Mussolini and reserved his loyalties for King Victor Emmanuel III.

In 1936 Badoglio resumed the position of chief of staff, but his star had already begun to decline. When World War II broke out, he was aware of, as well as inherently responsible for, Italy's military unpreparedness, and he opposed Italian entry timidly and without conviction. He was forced to resign in 1940 after the first military defeats.

When the King deposed Mussolini in 1943, he appointed the 72-year-old Badoglio prime minister with a mandate to end the war. But Badoglio, no longer resolute or capable, brought Italy to the worst possible armistice in 1943: German occupation, Allied invasion, and civil war. He disgraced himself further by abandoning Rome to the Nazis and fleeing south with his government. He held power precariously and only through Allied support, which ceased with Rome's liberation in 1944. Futilely defending his record in his last years, he died in Grazzano Monferrato in 1956.

There is a good summary of Badoglio's life in Italian, A. Mosti, Pietro Badoglio (1956). Studies in English concentrate on Badoglio's war government. The best military narrative is C. R. S. Harris, Allied Military Administration of Italy, 1943-45 (1957); the best general account is F. W. Deakin, The Brutal Friendship: Mussolini, Hitler, and the Fall of Italian Fascism (1962).