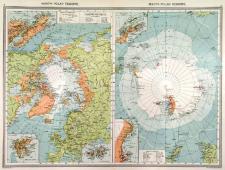 The first explorers of the North Polar region, the Arctic, probably crossed from northeastern Asia to northwestern North America more than 100,000 years ago, exploring the north as well as lands to the south. Exactly when the Inuit (Eskimos) took up residence in the Arctic is not known, although both they and the Vikings arrived in Greenland about a thousand years ago, which means they did not completely circle the Arctic until historical times.

The Vikings explored much of the north Atlantic beginning in the 800s. It was they who pioneered the first part of what became known as the "Northeast Passage," sailing north of Norway and to the northern coast of what is now Russia. In 1527, after European explorers had begun to show that the New World was composed of huge landmasses that blocked east-to-west passage from Europe to eastern Asia, England's Robert Thorne urged King Henry VIII to send an expedition to the North Pole, arguing that it would allow passage directly from England to Asia. The king did not act on Thorne's suggestion, but Thorne's idea that the North Pole would be in open water persisted into the 1800s.

the Barents Sea, but in 1596 he and commanders Jacob van Heemskerck and Jan Corneliszoon Rijp took two ships to 79°49′N, and discovered Bear Island, the island of Svalbard (part of an archipelago), and a wall of ice. From 1607 to 1611, Henry Hudson made four voyages from England to find a northern passage to eastern Asia, at first trying to find a Northeast Passage and then trying to find a Northwest Passage. His discoveries included the huge Hudson's Bay, and he laid the foundation for future expeditions by mapping much of the northern extremities of Scandinavia and North America.

During the eighteenth century two divergent views of the North Pole would develop. Whalers held the view that an ice sheet covered the Arctic Ocean; others, most of whom had never been to the Arctic, held that there was a wall of ice along the northern Atlantic, north of which was an open sea. England's Captain James Cook's last mission was to sail to the northern Pacific and there find an entry created by warm currents through the wall of ice to the open Arctic sea. He was killed in Hawaii before he could discover that there was no such entry.

The First to Reach the North Pole

The early expeditions to the Arctic had been motivated by money; a short route through northern waters would have meant immense wealth for the explorers and their governments. Once it became clear that the route was nonexistent, exploration of the North Pole became a matter of scientific interest and adventure. On 25 March 1827, a British expedition led by William Edward Parry sailed to the Seven Islands, beyond Spitsbergen, and used human powered sledges. They made it to 82°36′52″ N but discovered that the ice pack flowed southward, and they were unable to go farther north without running out of supplies. American explorer Elisha Kent Kane sailed in 1853 along Greenland's coast and, in 1854, mapped undiscovered areas of northern Greenland.

Crucial to reaching the North Pole was Charles Francis Hall's 1871 English expedition aboard the ship Polaris. He followed Kane's route in the hope of penetrating farther north, perhaps all the way to the North Pole. He and his crew made it to 82°11′ N, where he died, probably murdered by arsenic. Even so, he had shown a way to get near the North Pole by ship.

From 1881 to 1884, the United States funded a scientific mission to the edge of the Arctic to collect meteorological data and to explore Greenland, which helped scientists better understand the flow of the northern ice and the patterns of Arctic weather.

The great controversy over who was first to reach the North Pole began in 1908, when American explorer Frederick Albert Cook claimed he reached the North Pole on foot with three Inuit companions on 21 April 1908. In 1909, another American explorer, Robert Edwin Peary claimed he reached the North Pole by foot on 6 April 1909. Cook's claim fell apart when it was discovered that he had written a best selling book about climbing to the top of Mt. McKinley that was mostly lies; he barely made it halfway. Further, he failed to sight land that he should have seen on his path north. And his Inuit companions said they and Cook had not ventured more than a couple of days north from their base camp. On the other hand, Peary's data was sound; a review of his data in 1998 by the National Geographic Society showed that he passed at least within five miles of the North Pole.

On 9 May 1926, American naval officer Richard Evelyn Byrd flew over the North Pole in an airplane. There were claims in the 1970s that he missed the North Pole by many miles, perhaps falsifying his records, but the weight of evidence supports his claims.

The first person to see Antarctica may have been Hui-te-Rangiora, a Polynesian who, in a.d. 650, sailed south from New Zealand, seeing a "white land." Europeans had long suspected a South Polar continent—not because of scientific evidence, but because of a theory that the earth had to be in balance, and without a southern continent it would be unbalanced. Thus mapmakers would describe a southern continent without knowing of anyone who had seen it. In 1519, the crew of Ferdinand Magellan's epic around-the-world voyage thought Tierra del Fuego was the tip of a southern continent, but in 1578, Francis Drake disproved this when he sailed south of Tierra del Fuego.

On 17 January 1773, English ships commanded by James Cook became the first to cross the Antarctic Circle, at 66°33′S. In February 1819, English captain William Smith sailed south of latitude 62°S and discovered the South Shetland Islands. British naval officers ridiculed his report. In October 1819, he and his crew sailed south again, discovering George Island, where they landed, claiming it for England. South Seas sealers, however, were willing to believe Smith's claims, and during the next few years they visited the islands Smith had discovered, slaughtering seals by the hundreds of thousands—almost every seal in the region. In 1820, the Royal Navy's Edward

The First to Reach the South Pole

On 7 February 1821, the sealer Cecilia, captained by John Davis, landed the first men on Antarctica, along the Danco Coast near Hughes Bay. In 1831, England mounted an expedition to determine the size of Antarctica and whether it was land or mostly water. Led by John Biscoe, the expedition circumnavigated Antarctica and proved it was land.

The United States Exploring Expedition of 1840 was the first overseas scientific enterprise sponsored by the United States government. Under the command of Lieutenant Charles Wilkes, the expedition charted twelve hundred miles of Antarctica's coastline, proving that the South Polar region was a landmass big enough to be called a continent. In January 1840, English ships commanded by James Clark Ross, discovered Victoria Land, Ross Island, Mt. Erebus, the Ross Sea, and the Ross Ice Shelf.

In November 1892, Captain Carl Larsen landed his ship Jason on Seymour Island and discovered petrified wood, which showed that Antarctica had once had a much more temperate climate. In 1899, English-Norwegian adventurer Carsten Borchgrevink landed at Cape Adare. Living in prefabricated huts, he and his crew became the first to spend a winter on Antarctica, use sled dogs there, and explore the Ross Ice Shelf.

From 1901 to 1904, an expedition led by Englishman Robert Falcon Scott camped at McMurdo Sound and mapped much of the interior of Antarctica. In November 1902, Scott, Ernest Shackleton, and Edwin Wilson crossed the Ross Ice Shelf in an effort to reach the South Pole, but they stopped at 82°33′S and returned suffering from malnutrition, scurvy, and snow blindness. Once back in Britain, Scott began to form plans for another scientific expedition to Antarctica. In 1911, he and an extraordinarily well-equipped expedition set up camp on Ross Island.

Meanwhile an expedition led by Norwegian Roald Amundsen set up camp in the Bay of Whales on the Ross Ice Shelf. He sailed on a ship that had been used successfully to ride Arctic ice floes, the Fram. It had an eggshaped hull that rode up on top of ice floes rather than being crushed when ice floes pressed upon it. Amundsen set off with four men on skis to the South Pole and reached it 14 December 1911, pitched a tent, planted a flag, left Scott a note, and departed for his base camp. He and his companions all returned safely.

Scott, on the other hand, and four others, Birdie Bowers, Edgar Evans, Titus Oates, and Edward Wilson, arrived at the South Pole on 18 January 1912. Scott was determined to continue his expedition's scientific studies,

even though two of his men were very sick, and he got them lost for about a day looking for fossils. Whereas Amundsen had placed many small depots of supplies along his route, Scott had placed only big ones spaced farther apart. Evans died on 18 February. About a day's travel from one food supply, he and his men were trapped in their tents by a storm. Oates, on the verge of losing his legs to frostbite, staggered out into the storm, never to be seen again. Scott and the others froze to death.

On 28 November 1929, Richard Evelyn Byrd duplicated his North Polar feat by being the first to fly, with three companions, over the South Pole. In November 1935, another American, Lincoln Ellsworth, became the first to fly across Antarctica, from one side to the other, landing near Byrd's base, Little America. In 1958, an expedition led by Vivian Fuchs crossed Antarctica from the Weddell Sea to the Ross Sea via the South Pole in ninety-nine days, covering 2,158 miles.

The Antarctic Treaty, signed in Washington, D.C., in 1961, declared that Antarctica was international land and that it would be used only for "peaceful" purposes. Even so, various countries have tried to lay tacit claim to large regions of the continent. Argentina and Chile have nearly gone to war over claims to Antarctic islands. By the beginning of the twenty-first century, the United States had the largest presence in Antarctica, including a base at the South Pole, although the base was drifting away from the pole at thirty-two feet per year.

In 1981, the scientist Joseph Farman—a leader of the British Antarctic Survey based in Halley Bay close to the Weddell Sea—discovered that the ozone layer thinned over Antarctica during the winter. Eventually, it was shown that the "hole in the ozone" broke up into "bubbles" that would float north, sometimes over populated areas. The hole grew larger every winter, encompassing nearly the whole continent by 1989. Although Farman's findings were at first ridiculed, the nations of the world eventually agreed to eliminate CFC use by 2000. CFCs are widely believed to have caused the ozone hole.

Herbert, Wally. The Noose of Laurels: The Discovery of the North Pole. London: Hodder and Stoughton, 1989.

Holland, Clive, ed. Farthest North: Endurance and Adventure in the Quest for the North Pole. New York: Carroll and Graf, 1999.