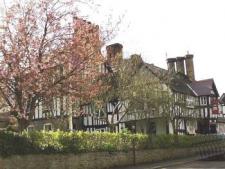 oxford
views updated
Radnorshire (Sir Faesyfed). County of mid-Wales created at the Act of Union with England in 1536. It was part of the Welsh kingdom of Powys but was subject to Saxon attack both before and after the construction of Offa's Dike. It was rapidly overrun by the Normans, and the north, the Welsh cantref of Maelienydd, became Mortimer land, whilst the south, the Welsh cantref of Elfael, was taken by the Braoses. These two areas were eventually formed into the new county, the smallest of the Welsh shires. Incorporated into Powys as a district in 1974, it became part of the Powys unitary authority in 1996.

Radnorshire was both the smallest and the poorest of the pre-1974 counties. It was mainly made up of the high moorlands of Radnor Forest (2,660 feet) and the drainage system of the upper Wye and its tributaries, the Claerwen, Elan, Irfon, and Ithon.

Given its physical character, sheep-farming is the dominant agricultural enterprise, but in the 19th cent. the exploitation of mineral springs gave rise to small spas which are now tourist centres. Water resources have also been developed mainly to supply the English midlands. The Elan valley reservoirs were constructed between 1892 and 1906. Forestry is another activity and the complex of upland, lakes, forests, and former spas underpins tourism.

As a consequence of its early Anglicization Radnorshire has a low proportion of Welsh speakers. Even in 1901 only 6.2 per cent spoke Welsh, a figure lowered by construction workers on the dam sites. In 1991 the percentage was 8.3. The total population in 1991 was only 22,982.