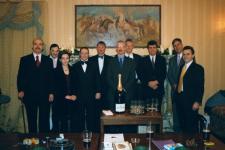 oxford
views updated
Otterburn, battle of, 1388. Though little more than a routine border skirmish, Otterburn was rendered remarkable by the number of ballads it inspired, including ‘Chevy Chase’, and by the ferocity of the encounter, which caused Froissart to describe it as ‘one of the sorest and best fought, without cowards or faint hearts’. A large Scottish gathering near Jedburgh in the summer of 1388 resolved on a two-pronged campaign, one attack west towards Carlisle, the other across Carter Bar into Redesdale. The eastern army, under James, earl of Douglas, having ravaged as far as Durham, was pursued in retreat by Henry Percy (‘Hotspur’) and his brother Ralph. Late on 15 August the English caught up at Otterburn and went straight into the attack. As night fell, the battle developed into a series of hand-to-hand single combats. Both the Percies were captured but Douglas himself was killed. A second English force under the bishop of Durham arrived the following day but did not choose to attack. The dead from the battlefield were buried nearby at Elsdon.