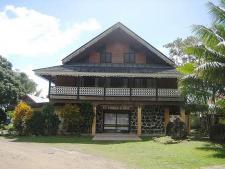 Manihiki is separated by 40 kilometers of open sea from its twin atoll of Rakahanga. It consists of two large islets and many smaller ones in the northern Cook Archipelago. There were 905 residents of the atolls in 1966. The languages are classified in the Eastern Polynesian Group of Austronesian languages. Prior to 1852 the people of Manihiki and Rakahanga would regularly migrate en masse from one atoll to the other, to allow natural regeneration of the abandoned atoll. Missionaries ended these cyclical movements and there are now permanent populations on both atolls. The senior line or moiety is supposed to reside on the lagoon side of the islets, while the junior line resides on the ocean side.

The primary staples are coconuts and swamp taro, in addition to sea foods. There were no pigs, dogs, or chickens on the atolls when Europeans arrived. Important kin groups are moieties, bilateral descent groups, and lineages. Descent is bilateral, with a patrilineal emphasis. All land is divided Between the moieties and then allocated to descent groups. Arranged marriages are common and residence tends to be patrilocal. Polygyny was permitted for the chiefs, although all marriages are now monogamous. The core of a household is a single nuclear family (puna ). Membership in a household is flexible, however, and many combinations of relatives can be found. The people of Manihiki and Rakahanga are organized into moieties (one senior and one junior), both of which fissioned sometime in the past to create four submoieties or Descent groups. Out of these lineages twenty-five households have been established. The entire population is evidently descended from a single family, and so it constitutes one great bilateral kin group. Before the moieties were established the people were led by one chief or ariki. When the community split so did the office of ariki, with his ritual powers and responsibilities going to the senior line and his economic powers going to the junior line. Each of the four lineages also have leaders, who collectively make up the chiefly council.

All of the people are now Christian, although the Concept of tapu, "sacredness," was important in the past. There are two ceremonial stone platforms (marae ) one for each moiety. The native priests were the guardians of the gods, to whom they offered sacrifices at the marae.