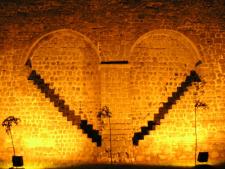 City and province in southeastern Turkey.

Diyarbakir province is bounded on the north by the Bitlis Mountains and on the west by the Euphrates River. The province comprises thirteen districts with a total area of 15,355 square kilometers. Its total population is 1,282,628 (2000 census).

The city of Diyarbakir, known in former times as Amida and Kara-Amid, is the principal urban center and capital of the province, which is populated mostly by Kurds. Located on the Tigris River, the city is renowned for its distinctive black basalt fortification walls that date from the fourth century c.e. The walls, with a circumference of 5.5 kilometers, are 12 meters high and 3.5 meters thick.

Diyarbakir has grown rapidly since 1950, when its population was 45,495. After 1984 the city's population multiplied as a result of the army's forcible relocation of Kurdish villagers in an effort to suppress an armed insurrection by the Kurdistan Workers Party. According to the 2000 census, the population had reached 818,396.

During the nineteenth century, Diyarbakir had strong economic links with cities that now are in Iraq and Iran, but these were severed after 1918. Contemporary Diyarbakir is an agricultural market center known also for its cotton textiles, leather products, and trade in grain, mohair, and wool. It has long been known for its goldsmith and silversmith work. The city is linked to western Turkey by railroad and is also the site of an air base.