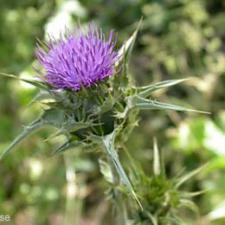 Milk thistle (Silybum marianum or Cardus marianum ) is a plant used for treating liver disorders, breast-feeding problems , and other illnesses. The active ingredient of the herb, silymarin, is found in the ripe seeds of the plant. The milk thistle plant has a long stem, green leaves with white spots, and pink to purple spiky flowered head (which true to its name, resembles a thistle). The plant is native to Europe and grows in the wild in the United States and South America. Other common names for the plant include Mary thistle, St. Mary thistle, Marian thistle, and lady's thistle.

The medicinal benefits of milk thistle have been valued for more than 2,000 years. Written records show that as early as the first century, Romans were using the plant as a liver-protecting agent. The plant was also frequently used throughout the Middle Ages, and it is in the herbal literature of this period that the medicinal properties of milk thistle seeds are first noted. Nicholas Culpepper, a British herbalist, wrote about the value of the herb in treating diseases of the liver and spleen in the late eighteenth century, and by the end of the next century, records show that American physicians were also prescribing the substance. Silymarin was first isolated from the milk thistle plant by German scientists in the 1960s.

The leaves and stem of the milk thistle plant are edible, and can be used in salads or eaten raw. The plant was cultivated as a vegetable in Europe through the end of the nineteenth century.

Milk thistle is thought to promote the growth of new liver cells, and to prevent toxins from penetrating through healthy liver cells by binding itself to the cell membranes. It is prescribed for cirrhosis, hepatitis , and other liver disorders. Several clinical studies have demonstrated that individuals with cirrhosis who take daily doses of milk thistle extract have a lower mortality rate than those who took a placebo (or sugar pill). While further research needs to be completed, a 2001 article reports that clinical trials show that milk thistle (at 140 mg three times per day) did indeed improve survival among cirrhosis patients.

In addition, milk thistle may have a protective effect on the liver, and is sometimes prescribed for patients who take medications that can cause liver damage (e.g., Thorazine, Haldol), or those who are exposed to liverdamaging substances such as lead. A large, controlled trial sponsored by the National Center for Complementary and Alternative Medicine (NCCAM) and the National Institutes of health (NIH) of milk thistle's medicinal value in the treatment of hepatitis and liver injury was scheduled to begin in the year 2000.

Milk thistle is frequently prescribed for breastfeeding mothers to promote increased breast milk secretion. Although the herb is considered safe for nursing mothers, it should be acquired from a reputable source and prescribed by an herbalist, naturopathic physician, or other healthcare professional familiar with its use.

The active chemical components of the milk thistle, silymarin (a complex of flavonoids) and its constituent, silibin, act as antioxidants . These substances have been shown to slow cell growth in some types of cancer .

Milk thistle may prevent inflammation of the gall-bladder ducts and clear up jaundice .

Milk thistle is the only known antidote for death cap mushroom (Amanita phalloides ) poisoning. Ingesting this deadly mushroom can destroy the liver by shutting down protein production in liver cells. Milk thistle neutralizes these toxins and protects the liver. Milk thistle may also be helpful in acetaminophen overdosage.

Several other dermatological uses for the herb are currently under investigation. The antioxidant properties of the herb may have a healing effect on skin wounds and burns . Milk thistle has also been proposed as a cosmetic agent to retain skin tone and quality. Further studies are needed to prove the efficacy of the herb for these applications.

Milk thistle is available in seed form, in capsules, and in extracts and tinctures. A tincture is an herbal preparation made by diluting the herb in alcohol. Tinctures of milk thistle can be taken in 1 or 2 ml doses three times a day.

Milk thistle seed has a low level of water solubility, so infusions (or teas) made from the herb are weaker than milk thistle tinctures and extracts. An infusion of milk thistle can be prepared by pouring a cup of boiling water over one teaspoon of seeds that have been ground to a fine texture. After the mixture steeps for 10-20 minutes, the herb is strained out and the mixture can be drunk. Instead of straining, the herb can also be placed into an infuser ball, tea bag, or a piece of cheesecloth or muslin and removed after steeping. Individuals can drink two to three cups of the infusion daily.

Milk thistle seed can also be taken by mouth in a dose of 1 tsp of fresh ground seeds daily. The herb should always be stored in an airtight container in a cool location away from bright light to maintain its potency.

Individuals who suspect they have a liver disorder should always seek care from a healthcare professional.

Botanical supplements are regulated by the FDA; however, they currently do not have to undergo any approval process before reaching the consumer market, and are classified as nutritional supplements rather than drugs. Legislation known as the Dietary Supplement Health and Education Act (DSHEA) was passed in 1994 in an effort to standardize the manufacture, labeling, composition, and safety of botanicals and supplements, and in January 2000, the FDA's Center for Food Safety and Applied Nutrition (CFSAN) announced a 10-year plan for establishing and implementing these regulations by the year 2010.

Milk thistle is considered safe to use during pregnancy and in women who breastfeed. However, there are currently no long-term studies on use of the herb during pregnancy or lactation. A woman should speak with her healthcare practitioner before taking any herbs and/or medications during pregnancy.

Milk thistle may cause mild nausea and diarrhea , or loose stools. The herb may also cause an allergic reaction in some individuals, particularly those with known allergies to plants in the Asteraceae family (thistles, daisies, artichokes). No other widely reported side effects are known when milk thistle is taken in proper therapeutic dosages. However, people with chronic medical conditions should consult with their healthcare professionals before taking the herb.

Tyler, Varro. "This weed is a potent healer; protect your body from environmental toxins with milk thistle." Prevention 50, no. 1 (October 1998):79.

oxford
views updated
milk thistle An annual or biennial thistle, Silybum marianum (Carduus marianus) that has been used as a vegetable; the flower receptacle can be eaten like globe artichoke. Traditionally used for treatment of inflammatory liver disease and cirrhosis with some evidence of efficacy, but by injection rather than eaten.

A Dictionary of Food and Nutrition DAVID A. BENDER

DAVID A. BENDER "milk thistle ." A Dictionary of Food and Nutrition . . Retrieved April 03, 2020 from Encyclopedia.com: https://www.encyclopedia.com/education/dictionaries-thesauruses-pictures-and-press-releases/milk-thistle

Periwinkle , Description An herbal remedy with a rich history in folk medicine, periwinkle is the common name for a pair of perennial flowering shrubs belonging t… Medicinal Plants , Medicinal Plants Plants can not run away from their enemies nor get rid of troublesome pests as humans or other animals do, so what have they evolved… Chlorella , Description Chlorella is a type of single-cell green algae. It is a major component of phytoplankton, which are very small free-floating aquatic plan… Aloe , Aloe Description Appearance Aloe vera, a member of the lily family, is a spiky, succulent, perennial plant. It is indigenous to eastern and southern… Echinacea , Definition Echinacea, or purple coneflower, is a perennial herb of the Composite family, commonly known as the daisy family. Most often referred to a… Botanical Medicine , BOTANICALS. Botanicals are fresh or dried plants, plant parts, or plants' isolated or collective chemical components, extracted in water, ethanol, or…