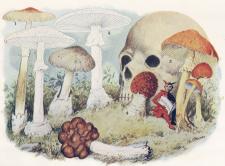 Mushroom poisoning refers to the severe and often deadly effects of various toxins that are found in certain types of mushrooms. One type known as Amanita phalloides, appropriately called "death cap," accounts for the majority of cases. The toxins initially cause severe abdominal cramping, vomiting, and watery diarrhea, and then lead to liver and kidney failure.

The highest reported incidences of mushroom poisoning occur in western Europe, where a popular pastime is amateur mushroom hunting. Since the 1970s, the United States has seen a marked increase in mushroom poisoning due to an increase in the popularity of "natural" foods, the use of mushrooms as recreational hallucinogens, and the gourmet qualities of wild mushrooms. About 90% of the deaths due to mushroom poisoning in the United States and western Europe result from eating Amanita phalloides. This mushroom is recognized by its metallic green cap (the color may vary from light yellow to greenish brown), white gills (located under the cap), white stem, and bulb-shaped structure at the base of the stem. A pure white variety of this species also occurs. Poisoning results from ingestion of as few as one to three mushrooms. Higher death (mortality) rates of more than 50% occur in children less than 10 years of age.

Poisonous mushrooms contain at least two different types of toxins, each of which can cause death if taken in large enough quantities. Some of the toxins found in poisonous mushrooms are among the most potent ever discovered. One group of poisons, known as amatoxins, blocks the production of DNA, the basis of cell reproduction. This leads to the death of many cells, especially those that reproduce frequently such as in the liver, intestines, and kidney. Other mushroom poisons affect the proteins needed for muscle contraction, and therefore reduce the ability of certain muscle groups to perform.

Symptoms of Amanita poisoning occur in different stages or phases. These include:

Other symptoms are due to either a decrease in blood clotting factors that leads to internal bleeding or reduced muscle function, with the development of weakness and paralysis.

In most cases, the fact that the patient has recently eaten wild mushrooms is the clue to the cause of symptoms. Moreover, the identification of any remaining mushrooms by a qualified mushroom specialist (mycologist) can be a key to diagnosis. When in doubt, the toxin known as alpha-amantin can be found in the blood, urine, or stomach contents of an individual who has ingested poisonous Amanita mushrooms.

It is important to remember that there is no specific antidote for mushroom poisoning. However, several advances in therapy have decreased the death rate over the last several years. Early replacement of lost body fluids has been a major factor in improving survival rates.

Therapy is aimed at decreasing the amount of toxin in the body. Initially, attempts are made to remove toxins from the upper gastrointestinal tract by inducing vomiting or by gastric lavage (stomach pumping). After that continuous aspiration of the upper portion of the small intestine through a nasogastric tube is done and oral charcoal (every four hours for 48 hours) is given to prevent absorption of toxin. These measures work best if started within six hours of ingestion.

In the United States, early removal of mushroom poison by way of an artificial kidney machine (dialysis) has become part of the treatment program. This is combined with the correction of any imbalances of salts (electrolytes) dissolved in the blood, such as sodium or potassium. An enzyme called thioctic acid and corticosteroids also appear to be beneficial, as well as high doses of penicillin. In Europe, a chemical taken from the milk thistle plant, Silybum marianum, is also part of treatment. When liver failure develops, liver transplantation may be the only treatment option.

The mortality rate has decreased with improved and rapid treatment. However, according to some medical reports death still occurs in 20-30% of cases, with a higher mortality rate of 50% in children less than 10 years old.

The most important factor in preventing mushroom poisoning is to avoid eating wild or noncultivated mushrooms. For anyone not expert in mushroom identification, there are generally no easily recognizable differences between nonpoisonous and poisonous mushrooms. It is also important to remember that most mushroom poisons are not destroyed or deactivated by cooking, canning, freezing, drying, or other means of food preparation.

Mushroom Toxins from the FDA. 〈http://vm.cfsan.fda.-gov/∼mow/chap40.html〉.

Leptospirosis , Definition Leptospirosis is a febrile disease (fever ) caused by infection with the bacterium Leptospira interrogans. L. interrogans is sometimes cla… Transient Ischemic Attack , Definition A transient ischemic attack (TIA), or "mini-stroke," is a neurologic episode resembling a stroke but resolving completely within a short p… Postconcussional Syndrome , Post-Concussion Syndrome Definition Post-concussion syndrome (PCS) is a common but controversial disorder with a variety of symptoms including, but n… Achalasia , Achalasia Definition Achalasia is a disorder of the esophagus that prevents normal swallowing. Description Achalasia affects the esophagus, the tube… Seizures , Definition A seizure is a sudden change in behavior characterized by changes in sensory perception (sense of feeling) or motor activity (movement) du… Porphyrias , Definition The porphyrias are a group of rare disorders that affect heme biosynthesis. Heme is an essential component of hemoglobin as well as of man…