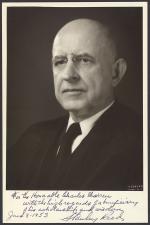 Stanley Forman Reed served as associate justice of the U.S. Supreme Court from 1938 to 1957. Before his appointment to the Court, Reed served as U.S. solicitor general. Reed was a strong supporter of congressional power to regulate the U.S. economy but was more moderate in his support of civil liberties.

"The United States … grants to all citizens a right to participate in the choice of elected officials … [a] choice which cannot be nullified by a state through casting its electoral process in a form which permits … racial discrimination in the election. Constitutional rights would be of little value if they could be thus indirectly denied."
—Stanley F. Reed

Reed was born on December 31, 1884, in Macon County, Kentucky. Educated at private schools, he graduated from Kentucky Wesleyan College in 1902. He earned a second bachelor's degree at Yale University. Reed attended law

school at both the University of Virginia and Columbia University but never completed his law degree. In 1908 he went to Paris and studied for a year at the Sorbonne.

He returned from Europe and studied for the Kentucky bar exam. He was admitted in 1910 and began a law practice as a solo practitioner in Macon County. From 1912 to 1916, he served in the Kentucky General Assembly but left to serve in the Army during world war i. After the war he joined a large law firm.

President herbert hoover appointed Reed general counsel of the Federal Farm Board in 1929. Though Reed was a Democrat, the Republican Hoover promoted him to general counsel of the Reconstruction Finance Corporation (RFC) in 1932. The RFC was Hoover's belated attempt to use the power of the federal government to lift the U.S. economy out of the economic depression that had begun in November 1929. When franklin d. roosevelt succeeded Hoover as president in 1933, he kept Reed in this position.

Reed continued to impress his superiors. In 1935 he was appointed U.S. solicitor general, whose duty it is to argue cases before the U.S. Supreme Court. In this position Reed was called on to defend the constitutionality of new deal economic programs that empowered the federal government to regulate the national economy. He met a conservative Supreme Court, with the majority of the justices opposed to these new programs. The centerpiece of the New Deal was the national industrial recovery act of 1933 (NIRA), 48 Stat. 195, which was designed to bolster the national economy through the enforcement of "codes of fair competition." Reed's arguments in the 1935 case that challenged the constitutionality of the NIRA (A.L.A. Schechter Poultry Corp. v. United States, 295 U.S. 495, 55 S. Ct. 837, 79 L. Ed. 1570) were unsuccessful, and the act was declared unconstitutional.

Reed had mixed success defending New Deal programs before the Court. President Roosevelt, knowing that Reed believed in the New Deal, appointed him to the Supreme Court in 1938. The appointment marked the decline of conservative economic thought on the Court and helped pave the way for sustaining federal programs and policies in the future. Reed consistently upheld the right of Congress, under the power of the commerce clause of the U.S. Constitution, to regulate the national economy.

Apart from economic issues, Reed was a moderate. He wrote the majority opinion in Smith v. Allwright, 321 U.S. 649, 64 S. Ct. 757, 88 L. Ed. 987 (1944), that struck down the "white primary" in the southern states. The device effectively kept African Americans from exercising their right to vote in any meaningful sense. At that time the South was a virtual one-party system dominated by the democratic party. State Democratic parties excluded African Americans from party membership, and state legislatures closed the primaries to everyone but party members. African Americans were thus barred from voting in the primary. The general election was a mere formality for the primary winner because there was at most token Republican opposition. Reed declared the practice unconstitutional, because it violated the Fifteenth Amendment's prohibition against denying the right to vote to citizens because of their race. Reed also voted to end the separate-but-equal doctrine of racial segregation in brown v. board of education, 347 U.S. 483, 74 S. Ct. 686, 98 L. Ed. 874 (1954).