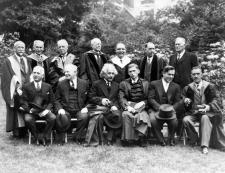 George Sarton, historian of science, was born in Ghent, Belgium, in 1884 and died in Cambridge, Massachusetts, in 1956. He married Eleanor Mabel Elwes, an English artist, in 1911; their daughter, May, who became a poet and novelist, was born in 1912.

As a youth Sarton wrote romantic poems and essays. At the University of Ghent he studied the natural sciences and mathematics, winning a medal for a chemical memoir in 1908 and completing a doctoral dissertation on Newton’s mechanics in 1911.

He became increasingly interested in the history and philosophy of science and dedicated the rest of his life to establishing the history of science as an independent discipline. In 1912 he founded Isis, a scholarly journal for this new field, and continued to be its editor through 1952. After only five issues, publication was interrupted by World War i, but it was resumed in 1919. Meanwhile Sarton had fled Belgium and moved to the United States in 1915. As a research associate of the Carnegie Institution, from 1918 on, he used Harvard’s Widener Library and offered a course in the history of science at Harvard, where he became a professor in 1940. The History of Science Society was formed in the United States in 1924; it provided a professional organization for the new discipline and guaranteed the publication of Isis. Iszs has published a continuous series of valuable critical bibliographies; the first 79 of these were prepared by Sarton himself. Osiris was founded in 1936 to accommodate studies that were too long for Iszs but too short for separate publication.

When Sarton was invited, in 1916, to deliver the Lowell lectures, he chose Leonardo da Vinci as his subject. On this occasion he was struck with how little was known about ancient and medieval science leading up to Leonardo, and he decided that a comprehensive history needed to be written. In 1919 he recovered his notes and a good part of his library, which he had had to abandon in Belgium, and two years later he began to write his Introduction to the History of Science (1927-1948). Ultitimately, Sarton did not take this history beyond the fourteenth century; he realized how much time would be required to handle the fifteenth century on the same scale as the earlier centuries and preferred to spend his remaining years on more limited subjects; for example, he wrote A Guide to the History of Science (1952a), The Appreciation of Ancient and Medieval Science During the Renaissance (1955), and Six Wings: Men of Science in the Renaissance (1957).

His aim in writing the history of science was not only to establish and define that field of study but also to show its importance for the philosophy of science and for any positive philosophy. Sarton called science “systematized positive knowledge,” picturing it as a living, continually developing organism. He maintained that science is the only cumulative and progressive human activity and that the study of the history of mankind must focus on the history of science; any tolerably complete history of civilization must devote considerable space to explaining scientific progress. He believed that the historian of science has a mission to defend the traditions of science, not because they differ essentially from those of other fields, but because “they are all that makes life worth living, they are the nobility and the goodness of life” (1952a, p. 15).

For Sarton, science has grown “out of the minds and hearts of living men” (1954, p. 67), and its history is therefore often best written in terms of biography. He did not limit his account to the achievements of outstanding scientists, because he found that a number of smaller discoveries usually contributed to the gradual preparation of major ones. He warned that the history of science must not be confused with the history of scientific method, nor be approached from the economic point of view, which overemphasizes applications.

Influenced by Comte and Tannery, Sarton repeatedly emphasized that the history of science is the integration of the histories of the separate sciences, not their summation; it is itself a specialty built on a thorough understanding of the methods of science and of history; it covers ancient, medieval, and modern science; and it requires more than the leisure hours of capable scientists or of scholarly historians. The historian of science must be trained in science; indeed, he should be acquainted with all advancing knowledge, not just scientific and historical material. Moreover, Western science cannot be properly understood without an appreciation of the extent of the influence of Islam on Western civilization, and Sarton learned Arabic in order to comprehend this influence.

Warm and subtly humorous, Sarton made friends throughout the world. He was tireless in his own work and expected similar patience and critical attitudes from others. Sometimes his genuine humility seemed like self-righteousness (e.g., [1931] 1956, p. 109). His lecture courses were popular, but he had few graduate students.

A new generation of historians of science, while appreciative of Sarton’s pioneering service, is reassessing his aims and methods. Present-day emphasis is on the structure and development of scientific ideas rather than on the ideas themselves. Sarton has been described as naive about history (Williams 1960, p. 160) and insufficiently selective in his methods, too lost in pedantic minutiae to appreciate their relevance for the overall development. He has been accused by some of stressing the content of science at the expense of its integration into a complex whole. On the other hand, Sarton’s interpretation of the history of science is alleged to be incompatible with the compartmentalism of modern science and to stress the cultural framework and the normative implications of science at the expense of its content (Grmek 1965, pp. 140-143). Grmek questioned whether one man can handle the history of science if it is interpreted as broadly as it was by Sarton, but he admitted that collaborative studies by teams of specialists have gained technical insight at the expense of the kind of synthesis that Sarton provided. Clearly, Sarton’s critics are in disagreement. However, the monumental scholarly edifice he erected can become a basis for a revision of the historiography of science.

(1931) 1956 The History of Science and the New Humanism. 3d ed. New York: Braziller. → A paperback edition was published in 1962 by the Indiana University Press.

1952b A History of Science: Ancient Science Through the Golden Age of Greece. Cambridge, Mass.: Harvard Univ. Press.

1955 The Appreciation of Ancient and Medieval Science During the Renaissance (1450-1600). Philadelphia: Univ. of Pennsylvania Press.

Agassi, Joseph 1963 Towards an Historiography of Science. History and Theory, Beiheft 2. The Hague: Mouton.

Buchdahl, Gerd 1965 A Revolution in Historiography of Science. History of Science 4:55-69.

Kuhn, Thomas S. 1962 The Structure of Scientific Revolutions. Univ. of Chicago Press. → A paperback edition was published in 1964.

The Belgian-born American historian of science George Sarton (1884-1956) founded the history of science in America.

George Sarton was born in Ghent on Aug. 31, 1884, the son of one of the directors and chief engineers of the Belgian national railroad system. Sarton studied philosophy at the University of Ghent and then turned to science, winning his doctorate in mathematics in 1911. He had, however, already become known as an author and scientist for his published novels and poems and his award-winning essay on chemistry (1908). Sarton emerged from his training with admiration for the insights of Auguste Comte and Henri Poincaré and a conviction that the basis of scientific philosophy was the history of science.

Sarton married an English artist, Eleanor Noble Elives, in 1911. In March 1913 he published the first issue of Isis, a journal of the history of science. At the beginning of World War I he fled to Holland, then to England, and, finally, to the United States. He arrived in 1915 and lectured at Harvard from 1916 to 1918, the first academic year in philosophy and the second in history of science. The appointment was not a regular one, and he was supported in the main by friends. The Lowell Lectures at Harvard in 1916 started Sarton on his lifetime project of tracing the history of science to Leonardo da Vinci.

The Carnegie Institution in Washington appointed Sarton a research associate in 1918, thus making him economically secure. He remained at Cambridge and, beginning in 1920, gave a course on the history of science in exchange for library space at Harvard. Meanwhile, he had published the second issue of Isis in September 1919. Sarton became an American citizen in 1924 and helped found the History of Science group the same year.

Sarton's major work, Introduction to the History of Science, consists of From Homer to Omar Khayyam (1927), From Rabbi Ben Ezra to Roger Bacon (1931), and Science and Learning in the 14th Century (1947-1948). During this time he went to North Africa and the Near East (1931-1932) to study Arabic and Islam; founded Osiris (1936), a journal designed for articles longer than those in Isis; and wrote and lectured.

In his writings Sarton used the model of a map maker. He combined biography and science, using secondary sources. As a result, he slighted Egyptian and Babylonian sources and relied heavily on Greek and medieval Arabic ones, which were more available to him. All of his works emphasized the continuity of science and its close affinity with magic.

Sarton officially became professor of the history of science at Harvard in 1940 and retired in 1951. He continued to lecture and write until his death on March 22, 1956.

Sarton's most important theoretical essays were collected in Sarton on the History of Science, edited by Dorothy Stimson (1962). May Sarton in I Knew a Phoenix: Sketches for an Autobiography (1959) treats her father sympathetically and poetically. His contributions to the history of science are critically analyzed in Joseph Agassi, Towards an Historiography of Science (1963). □