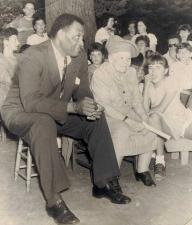 Ella Reeve "Mother" Bloor (1862-1951) was an American leader in fighting for the rights of those she characterized as "the world's unfortunates," and worked tirelessly as a labor organizer, Communist leader, and social activist.

Mother Bloor is one of the most tireless and accomplished crusaders and agitators the United States has ever seen. Over more than 60 years she worked for woman's suffrage, the Women's Christian Temperance Union, organized and raised funds for such causes as the Sacco-Vanzetti case and the American League against War and Fascism, and also served as an accomplished labor organizer. A radical activist, Ella Bloor had little patience with ideological debate. Her single goal was "to make life happier for the world's unfortunates."

Reeve was born July 8, 1862 near Mariner's Harbor on Staten Island and grew up there and in New Jersey, the self-described daughter of "a rich old Republican over on Staten Island." Her ancestors had fought in the Revolutionary and Civil wars. She attended public schools, briefly went to the Ivy Hall Seminary, and then was taught by her mother at home. When Reeve was 17, her mother died in childbirth, and Ella was responsible for caring for her nine younger siblings.

Reeve's father leaned toward political and religious conservatism, so that when she became interested in social and political reform as a teenager, she turned to her great uncle, Dan Ware, who was an abolitionist, Unitarian, and freethinker. Ware had a strong influence on her intellectual growth. When she was 19 Reeve married Dan Ware's son, Lucien Ware, an aspiring lawyer. She gave birth to six children over eleven years, Grace, Harold, Helen, Buzz, and two who died in infancy. During those years Ella Ware was introduced to the woman's suffrage movement and became active in the Women's Christian Temperance Union and the Ethical Culture Society of Philadelphia. She also became interested in the labor movement and organized the Philadelphia streetcar workers in the early 1890s.

Her political activism caused tension in her marriage, and the couple separated and were divorced in 1896. However, Lucien Ware was not apolitical himself. He would go on to receive the Order of Lenin for helping the Soviet Union with the mechanization and collectivization of its agriculture, led the charge for the U.S. Communist Party's agrarian reform program, and introduced Alger Hiss to Whittaker Chambers in 1934 before dying in an automobile accident in 1935.

After her divorce Reeve was active and independent, exploring possible occupations. She took courses at the University of Pennsylvania and wrote two children's books. She and her children then moved to the utopian community of Arden, Delaware, which was established by socialists. In 1897 she married socialist Louis Cohen, and the couple had two children, Richard and Carl, but were separated in 1902 and later divorced.

Reeve then became a political activist. She was always committed to improving the status of women but devoted her energies to left-wing politics and the labor movement. Ella Cohen met Eugene Debs in 1895, and he convinced her of the necessity of socialism. She joined the Socialist Labor Party in 1901. In 1905 she moved to Connecticut and became the state organizer for the party.

In 1906 her friend, writer Upton Sinclair, urged Ella Cohen to investigate conditions in the Chicago meatpacking industry. Sinclair wanted her to gather evidence for a government investigation documenting the charges he made against the industry in The Jungle. Richard Bloor, a fellow socialist and young pottery worker, went along to protect her. Sinclair feared it would be scandalous to have an unmarried team of investigators and convinced Ella Cohen to publish the reports under the name Ella Bloor. Although the couple quickly split up, she continued to use the name Ella Bloor for the rest of her life.

I would be too conspicuous going about unescorted to saloons and other places where men gather and talk," the New York Times quoted her as explaining. "In explaining the investigation to the public, Upton Sinclair thought it best to refer to us as Mr. and Mrs. Bloor, and the name has clung to me ever since. Richard Bloor was a Welsh immigrant, about half my age, and there was no romance associated with our association."

Bloor spent the next twelve years organizing for the Socialist Party and for the United Cloth Hat and Cap Makers Union. Her work on behalf of coal miners won her an honorary membership in the United Mine Workers of America. Bloor opposed World War I as imperialist and was arrested for antiwar activities. In 1918 she was Socialist Party candidate for lieutenant governor of New York. Disillusioned by the support of many Socialist Party leaders for the war, in 1919 Bloor helped form the Communist party and the Communist Labor party, which soon merged. Bloor worked devotedly for the party for the rest of her life, recruiting members from among miners, farmers, machinists, steel-workers, and needle workers.

In 1925, at the age of 63, Ella Bloor hitchhiked from New York to San Francisco on a cross-country tour for the Daily Worker. She held meetings in cities along the way, recruiting party members and selling subscriptions. In the 1920s she was active in the unsuccessful defense of Nicola Sacco and Bartolomeo Vanzetti. She also continued her labor organizing work, traveling to the coal mines to support strikers.

When the Depression hit, Mother Bloor, as she was then called, went to Washington to join the hunger marches of the unemployed. By the 1930s, when she was in her seventies, Mother Bloor was a sought-after speaker for the Communist Party, traveled extensively, and served as middlewestern regional secretary of the Farmers National Conference. While traveling to North Dakota to rally support for the United Farmers' League, she met Andrew Omholt, a farmer, party organizer and Communist Party candidate for Congress in North Dakota who soon became her third husband. She continued her party campaigning and labor organizing through the 1930s. In 1937 she made her second visit to the Soviet Union as an honored guest at the celebration of the 20th anniversary of the October Revolution. She visited that country several times, twice as a delegate to the Red International of Trade Unions, and once extolled the Soviets for their "democratic success."

At the age of 72 in 1936 she served a 30-day jail sentence in Nebraska after a mass farmers protest meeting. Her final campaign was during World War II, when she spoke at public rallies and on the radio on the theme "Win the War Against Fascism." In her lifelong fight for the "world's unfortunates," Mother Bloor suffered more than 30 arrests (although she claimed it was over 100), countless threats of violence, and frequent harassment by police.

On March 2, 1951 Bloor suffered a spinal injury from a fall near her home at Coopersburg, Pennsylvania, about 40 miles north of Philadelphia. During her several-month stay at Quakertown Hospital she received visitors from across the country, most of whom she was unable to recognize. Hospital attendants said she sang often during her stay, especially "The Star-Spangled Banner," singing all four verses. She spent a short time in a convalescent home before her death on August 10, 1951 from a stroke.