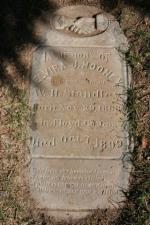 Thomas J. Mooney, 1883–1942, American labor agitator, b. Chicago. He was an active leader in several violent labor struggles in California before 1916 and was convicted as a participant in the bomb killings at the San Francisco Preparedness Day parade in 1916 and sentenced to death. His case aroused international interest because of the widely held belief in his innocence and the confessions of perjured testimony at his trial. In 1918 his sentence was commuted to life imprisonment. Many organizations and individuals sought unsuccessfully to obtain a new trial until Jan., 1939, when Gov. Culbert L. Olson of California pardoned him unconditionally.

Bloody Assizes 1685 , Bloody Assizes was the name given to the mass trials of Monmouth's rebels in 1685, presided over by Jeffreys and four other judges. Nearly all the 1,… Malmedy , MALMÉDY MASSACRE MALMÉDY MASSACRE (17 December 1944). During the Battle of the Bulge, the First SS Panzer Division under Lieutenant Colonel Joachim P… Jim Mitchell , Jim Mitchell Trial: 1992 Defendant: Jim Mitchell Crimes Charged: Murder, burglary, weapons charges Chief Defense Lawyers: Michael Kennedy, Nanci Clar… complex sentence , COMPLEX SENTENCE. A SENTENCE consisting of one main CLAUSE in which are embedded one or more subordinate clauses: I know where she lives, in which wh… Recidivism , The behavior of a repeat or habitual criminal. A measurement of the rate at which offenders commit other crimes, either by arrest or conviction basel… O.j. Simpson , Simpson, O. J. 1947– O. J. Simpson 1947– Professional football player, sports commentator “Image not available for copyright reasons” O. J. Simpson c…