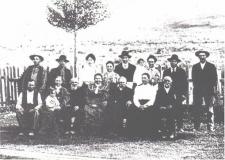 Glenn Frank, 1887–1940, American editor and educator, b. Queen City, Mo., grad. Northwestern Univ., 1912. He was assistant to the president of Northwestern Univ. from 1912 to 1916. In 1919, Frank joined the staff of the Century Magazine, becoming editor in 1921. In 1925 he was appointed president of the Univ. of Wisconsin, where he initiated the university's famous Experimental College and instituted changes in the teaching of agriculture. Ousted from his position by Gov. Philip Fox Follette in 1937, Frank became editor of Rural Progress. He was also active in the Republican party and was campaigning for the position of Senator from Wisconsin when he died in an automobile accident. His works include The Politics of Industry (1919), An American Looks at His World (1923), and America's Hour of Decision (1934).