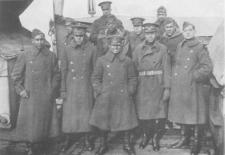 The American anthropologist Leslie A. White (1900-1975) was known for his fieldwork among the Keresan-speaking Indians, his "culturological" theory of human behavior, and his energy theory of cultural evolution.

Leslie White was born at Salida, Colorado, on January 19, 1900. He took his B.A. and M.A. degrees in psychology at Columbia University in 1923 and 1924. At the same time he took some courses at the New School for Social Research which he later said were the most important intellectual influences on him; his teachers there were Alexander Goldenweiser, William I. Thomas, Thorstein Veblen, and John B. Watson. In 1924 White decided that sociology would be his field, and he moved to the University of Chicago to take his Ph.D. degree in what was then a combined anthropology-sociology department. At that time he began the summer field expeditions to the Keresan pueblos in New Mexico which he continued for many years.

White taught briefly at the University of Buffalo and for 40 years at the University of Michigan, and after retirement he taught at Rice University, San Francisco State College, and the University of California at Santa Barbara. The wide interest in his work is demonstrated by the fact that his writings have been translated and published in several European languages and in India, China, and Japan. Several of his essays have been reprinted many times in prestigious publications representing a wide variety of disciplines. His 1940 article "The Symbol: The Origin and Basis of Human Behavior" was reprinted at least 14 times in collections representing anthropology, sociology, linguistics, philosophy, and social psychology. Several others, now published in his volume called The Science of Culture (1949), were also reprinted several times.

These essays were all on the subject of what he called culturology, the science of human behavior as based on culture—socially learned activities made possible by the uniquely human capacity to create symbols. Culturology, with White's definition of it, eventually made Webster's International Dictionary, and he contributed the articles on it for The International Encyclopedia of the Social Sciences and for the 15th edition of the Encyclopedia Britannica.

But White is remembered not so much for his positive contribution of culturology as for his affirmation of 19th century evolutionism, opposing the negative stand of American anthropology toward that important legacy. As Bohannan and Glazer put it (1973): "Leslie White for years stood alone in his conviction that evolutionary theory as expounded by Herbert Spencer, Lewis H. Morgan, and Edward Tylor was the beginning of the right track for a science of culture. He can now look about him in full awareness that the whole field [of anthropology] knows he was right."

The greatest amount of time and effort in White's early career was spent on field work and library research connected with his five monographs and many articles on the culture of the Keresan-speaking Indians of the American Southwest. The militant secrecy of the Indians toward their ancient culture—their religion particularly—made White's achievements in describing and analyzing it truly remarkable. This field work was mostly of the confidential-informant kind, based on hard-won trusted friendships that he was able to achieve with a few Indians whom he convinced that the information would be valuable to preserve for future generations of whites and Indians alike.

In his later years White fully devoted himself to the study of modern civilizational problems, particularly those related to the rise and spread of industrial capitalism. This interest had actually begun early: he said that as a student he studied psychology, switched to sociology, and finally to anthropology because of his intense desire to discover why modern nations behaved as they did. This progression of disciplines was due to his gradual realization that culture, in the anthropological sense, was the appropriate subject for him, not the psychology of people either in its individual or collective aspects.

White's early and middle years were attended by intense controversy over his pro-evolutionism. This reaction in the anthropological discipline was largely caused by an unusual feature of American anthropology; the nearly total adherence of the academic anthropologists to the teachings of Fran Boas. Boas wielded enormous influence in America because he became the founder and chairman of the Anthropology Department at Columbia University between 1899 and 1936, the first important school to train Ph.D. candidates in anthropology. Most of the university teachers of anthropology in the United States were powerfully and directly influenced by Boas, accepting his intellectual weaknesses as well as his very considerable strengths. The most important weakness was his anti-evolutionism. Beginning in the 1930s and until the 1960s White waged an unremitting crusade against anti-evolutionism which meant, as well, that he made mordant criticisms of Boas himself, who was idolized by most of White's contemporaries. This, of course, aroused wide hostility against White in most anthropology departments.

But White's writings and teaching eventually had a snowballing intellectual impact. His strong stand against the anthropological establishment of his day created a strong following for Whitean "neoevolutionism." But White distrusted schools-of-thought and tried to combat this tendency among his own students. In order to discourage the rise of an ingrown "Michigan School" he made these rules: that Michigan Ph.D. candidates also should have studied anthropology at some other major department; that no Michigan ethnology Ph.D. could be hired there; that a balanced representation of faculty from other major graduate schools be maintained in the Michigan department; and that the department be run democratically by an elected executive committee, with all faculty members having one vote. Former students from Michigan all agree that White should be honored for this achievement as well as many others.

Despite his unpopularity in many important quarters, White received numerous academic honors. He was given an honorary doctorate of sciences in 1952 by the University of Buffalo and an honorary doctor of laws in 1970 by the University of Colorado. He received the annual award for distinguished service voted by the faculty of the University of Michigan in 1957—the first year the award was made. He was Viking Medalist of the Wenner-Gren Foundation in 1959, vice-president of the American Association for the Advancement of Science in 1958, and president of the American Anthropological Association in 1964.

These awards, however impressive and numerous, came late in his career, and we may be sure the recognition was entirely by merit, for he never courted the politicians of the association nor his university's administrators, never deviated one step from his course in order to gain any kind of academic approval—his life was unblemished by any hint of careerism or any other kind of self-seeking, including high salary, large grants, or special academic chairs.

White died suddenly of a heart attack on a visit to Death Valley in 1975.

White's most famous books are The Science of Culture (1949), a collection of his most important essays, and The Evolution of Culture (1959). See also his general article "culturology" in The International Encyclopedia of the Social Sciences (1968). Some of his most important arguments appear in Elman R. Service, A Century of Controversy (1965), and in Richard K. Beardsley's article "An Appraisal of Leslie A. White's Scholarly Influence" in the American Anthropologist. □