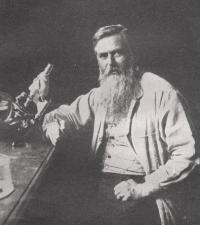 Bütschli was the son of a confectioner whose family had come from Switzerland several generations earlier. As a youth his scientific appetite was whetted by the lectures and the museum of the Senkenbergische Naturforoschende Gesellschaft in Frankfurt, which also inspired his fellow townsmen August Weismann and Richard Goldschmidt. Bütschli studied mineralogy, chemistry, and paleontology at the Karlsruhe Polytechnic Institute and in 1865–1866, at the age of seventeen, was assistant to the paleonotologoist Karl von Zittel. Next he traveled to Heidelberg, where he finished his doctorate in mineralogy, with minors in zoology and chemistry, in 1868.

During his year of required military service, Bütschli had decided that his true interest was zoology, so he went to Leuckart’s laboratory in Leipzig for a semester of advanced study after he left the army in 1869. In the fall of the same year Bütschli returned to Frankfurt and was recalled to military service when the Franco-Prussian War broke out in 1870. During this period his first cytological paper, on the structure of the germ strings of insects, appeared. After the war Bütschli went to Kiel, where he was assistant too the taxonomist Möbius for two years; among his works completed there is a monograph on free-living nematodes. These organisms permitted detailed study of the living cell, and Bütschli used them successfully for many years.

Dissatisfied with the situation in Kiel and desiring greater freedom for his promising cytological researches, Bütschli returned to Frankfurt in 1873 and spent the next three years working on the problems of cell division, fertilization, and the conjugation of the ciliates. In 1876 he presented the results of these studies in a thesis for admission as Privatdozent at the Karlsruhe Polytechnic Institute. At the age of thirty Bütschli was named professor of zoology and paleontology at Heidelberg. Here he remained for the rest of his life, declining attractive positions elsewhere; he retired in 1918, at the age of seventy, and spent the last two years of his life working on a textbook that he did not finish before his death from influenza.

Bütschli’s monograph of 1876, “Studien über die ersten Entwickelungsvorgänge der Eizelle, die Zelltheilulng und die Konjugation der Infusorien,” was important as a pioneer work in the development of several areas of cytology and cell theory. In it he was the first to identify and order sequentially the stages of nuclear division in several types of animal cells, simultaneously with Strassburger’s work on the division of plant cells and several years prior to Flemming’s studies on mitosis. Bütschli demonstorated that the polar bodies of eggs arise through atypical cell division, and in studying fertilization he was the first to describe the fertilization cone and to prove that normally only one sperm enters the egg.

The monograph was in press when Oscar Hertwig’s paper on fertilization in the sea urchin appeared, and Bütschli added an appendix in which he discussed the significance of Hertwig’s discoveries in relation to his own. Hertwig had succeeded where Bütschli had failed, in following the sperm from penetrationo to karyogamy. However, Bütschli’s description of many of the stages of fertilization and cleavage were more complete, at least partially because of differences in material. He clearly illustrated the fusion of male and female pronuclei in the eggs of snails, but did not recognize the true identity of the male pronucleus because of confusion created by the presence of the several micronuclei that make up the female pronucleus and gradually fuse before karyogamy.

The illustrations in this monograph are remarkable, especially when one considers that all of the observations were made on unstained material treated only with one percent acetic acid. (The use of carmine as a biological stain did not become common until a few years Later.) Bütschli clearly illustrated dividinig cells and noted what he called rodlets (chromosomes) that made up the “nuclear plate,” which, in his view, divided into halves at the climax of unclear division. The failure to illustrate nuclear—division stage earlier than metaphase was possibly due to the lack of staining techniques. Bütschli’s illustrations of the zygotene “bouquet” stage and of diakinesis during the first meiotic division of spermatogonia in the roach were excellent.

The second half of this monograph was devoted to the conjugation of the ciliates. In these organisms, unlike most other animals, reproduction and the sexual processes are not closely associated. Bütschli was the first to recognize this and to demonstrate that conjugation was not a reproductive process per se, but a sexual reorganization of the cell similar to fertilization. In his view, both conjugation and fertilization brought about a rejuvenation of the cell, either through some effect of the conjugation process or through the acquisition of new nuclear material. This idea formed the basis of subsequent work on the ciliate life cycle by Maupas, R. Hertwig, Calkinis, and others. Bütschli recognized that the micronuclei of ciliates were comparable with the nuclei of other cells and that they divided by similar processes. He was thus able to prove that these organisms were unicellular animals and to disprove the earlier views of their reproduction, which were based upon a false analogy between the ciliates and the Metazoa. Instead of comparing the ciliate with the whole metazoan organism, Bütschli compared it with the cell of the metazoan.

Bütschli drew many conclusions from these studies, some of which were well ahead of his time. Above all, he argued that cells were physicochemical systems and that cellular phenomena could best be understood in physical-chemical terms. As he said in the preface to his 1876 monograph:

Morphology composes only a part of the nature of organic forms. Each form must be capable of being explained in itself from given bases and influences. Only when it is shown that one organic form proceeds from another, and when the conditions of this appearance are known—as is hardly true in a single case today—is a material present in which it might be possible to seek a causal-mechanical explanation [of the phenomenon]… If we conceive of the elementary organisms [cells] as the building blocks of morphology, our understanding of the elementary organisms is altered, for the type of morphological observation of [multi]cellular organisms [previously] used loses it justification and physiological methods come to the fore. The phenomena on and in the elementary organisms can be more precisely stated only through a knowledge of the physical- chemical conditions of their appearance and disappearance [pp. 1–2].

In keeping with this conviction, he proposed a model for cell division based upon changes in surface tension.

It is perhaps strange that Bütschli did no further work in nuclear cytology, especially since the field was making rapid advances at the time; however, his deepest interest was in the cytoplasm as a physical- chemical system. He thus devoted his first ten years at Heidelberg to a detailed study ofthe protozoa, for he felt that life processes and the nature of protoplasm could be studied in unicellular organisms better than in Metazoa. These studies culminated in a three- volume monograph (1880–1889), a critical review of the whole field that included much original work by Bütschli himself—he checked many debious points— and a complete bibliography of all previously published work. These volumes, which remain a basic reference work, contain many important theoretical discussions, such as Bütschli’s hypothesis of the sexuality of the ciliates, and are still of considerable taxonomic importance.

During the years spent on the protozoan studies, Bütschil approached the structural problems of protoplasm more closely through extensive observation of the protoplasm of rhizopods and ciliates. These studies eventually led to the “alveolar theory of protoplasm,” which he first discussed in print in 1889 and summarized in Untersuchungen über microskopische Schäume und die Struktur des Protoplasmas (1892). In Bütschli’s view, protoplasm had an alveolar structure, being composed of a two-phase system similar to an emulsion. In keeping with his fundamental mechanistic conviction, Bütschyli felt that many of the properties of living protoplasm could be explained on a physical-chemical basis, and thus he spent much time experimenting with various emulsions of oil and soapy solutions of mineral salts that appear to duplicate the physical properties of living protoplasm to a remarkable degree. This work represented a great advance, for it was the first theory of protoplasmic structure to have a comprehensive observational and experimental basis, and at the same time it provided a physical-chemical model of the underlying phenomena of colloidal materials. This work was, of course, limited by the techniques and concepts of the time; however, more recent knowledge of protoplasm gained by electron microscopy and by colloid and protein chemistry does not detract from Bütschli’s pioneer study, which in respect to observation, analysis, and synthesis remains a model of scientific work in biology. With this work Bütschli felt that he had traced to the root the problems he had posed for himself as a young man.

Following his extensive work on protoplasm, Bütschli proceeded to examine a great number of organic and inorganic materials of a colloidal nature. These studies were published mainly in Untersuchungen über Strukturen (1898), which included 300 photomicrographs. This pioneer use of photomicrography was a reflection of Bütschli’s effort to present his observations as realistically and precisely as possible. These studies, together with the work on protoplasm, provided one of the bases of the subsequent development of colloid chemistry. After finishing Untersuchungen über Strukturen, Bütschli turned to the analysis of many mineral materials of biological origin: shells of mollusks, crustaceans, and echinoderms; tests of Foraminifera; and the spicules of sponges. In 1900 he published a short book on the structure of coagulated sulfur and a monograph on the structure of natural and synthetic silica gels.

At the age of sixty Bütschli returned to purely zoological work and began to prepare a comprehensive textbook of comparative anatomy, which had long been one of his secret loves. This work was to include both vertebrates and invertebrates; although more than a thousand pages of the work were finally published, Bütschli did not live to finish this ambitious undertaking.