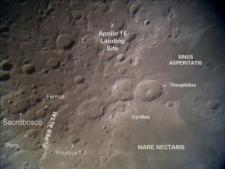 Sacrobosco (also called John or Johannes Halifax, Holyfax, Holywalde, Sacroboscus, Sacrobuschus, de Sacro Bosco, or de Sacro Busto) has been called a Scot, an Irishman, a Frenchman, a Brabancon, a Catalan, and a Jewish convert—all unfounded attributions. Some put his birthplace at Holywood near Dublin, or even at Nithsdale, Scotland. Very little is known of his life. English biographies maintain, and it is commonly held, that he was educated at Oxford.

After his studies Sacrobosco entered into orders and became a canon regular of the Order of St. Augustine at the famous monastery of Holywood in Nithsdale. About 1220 he went to Paris, where he spent most of his life and where he was admitted as a member of the university, on 5 June 1221, under the syndics of the Scottish nation. Elected professor of mathematics soon afterward, he won wide and enduring renown and was among the first exponents in the thirteenth century of the Arab arithmetic and algebra. By 1231 he was the outstanding mathematician and astronomer. He died in either 1244 or 1256 and was buried in the cloisters of the Fathers of Mercy, convent of St. Mathurin, in Paris.

The ambiguity of the year of Sacrbosco’s death comes from the epitaph engraved on his tombstone in the convent cloisters: “M. Christi bis C. quarto deno quater anno De Sacro Bosco discrevit tempora ramus Gratia cui dederat nomen divina Joannes.“If quarter modifies only deno, then four times ten equals forty, plus four gives forty-four. If quarter modifies quarto deno, then quarto deno is fourteen, and four times fourteen is fifty-six. The second interpretation is preferred by Johannes Fabricius, Christopher Saxius, Montucla, Bossut, and G. J. Vossius. An astrolabe decorates the stone, identifying the science to which he was most dedicated.

Sacrobosco’s chief extant works are elementary textbooks on mathematics and astronomy; De algorismo, De computo, and De sphaera. All three are frequently found in the same manuscript, or at least bound together, and may be his only extant books. Prosdocimo de Beldemandis, however, wrote in his fifteenth-century commentary on the De sphaera that there were “many other works that it would take too long to enumerate here” A second arithmetic on fractions, Algorismus de minutiis, is attributed to Sacrobosco by Prosdocimo, but the opening words are those commonly occurring in a treatise usually ascribed to a Richard of England. Other works dubiously ascribed to him are a brief tract on physical or philosophical (that is, sexagesimal or astronomical) rather than common fractions, two tracts on the quadrant (one of which is more often ascribed to Campanus of Novara), an Arithmetica Communis, and perhaps some commentaries on Aristotle.

Sacrobosco’s fame rests firmly on his De sphaera, a small work based on Ptolemy and his Arabic commentators, published about 1220 and antedating the De sphaera of Grosseteste. It was quite generally adopted as the fundamental astronomy text, for often it was so clear that it needed little or no explanation. It was first used at the University of Paris.

Chapter two treats the various circles and their names—the celestial circle; the equinoctial; the movement of the primum mobile with its two parts, the north and south poles; the zodiac; the ecliptic; the colures; the meridian and the horizon; and the arctic and antarctic circles. It closes with an explanation of the five zones.

Chapter three explains the cosmic, chronic, and heliacal risings and settings of the signs and also their right and oblique ascensions. Explanations are furnished for the variations in the length of days in different global zones, namely, the equator, and in zones extending from the equator to the two poles. A discussion of the seven climes ends the chapter.

The movement of the sun and other planets and the causes of lunar and solar eclipes form the brief fourth chapter.

After Manilius’ Astronomica, The Sphere was the first printed book on astronomy (Ferrara, 1472). Twenty-four more editions appeared in the following twenty-eight years, and more than forty editions from 1500 to 1547, the last being issued at Leiden. For eighty years after Barocius in 1570 had pointed out some eighty-four errors, The Sphere was still studied, and in the seventeenth century it served as a manual of astronomy in some German and Low Countries schools. Often it appeared with commentaries by the most distinguished scholars of the time. There were three Italian editions; by Maurus (Florence, 1550); by Dante de’Rinaldi (Florence, 1571), and by Francesco pifferi at Sienna in 1537, 1550, 1572, 1579, 1604. Two French editions, by Martin Perer and Guillaume Desbordes, were printed at Paris in 1546 and 1576.

Some claim that The Sphere merely paraphrases the elementary ideas of Ptolemy and the Arab astronomers al-Battānī and al-Farghānī, but this is a great exaggeration. Sacrobosco’s Sphere is far superior in structure and order to that of al-Farghānī. Resemblances should not be surprising, however, since both writers summarized the Almagest. Actually Sacrobosco omitted much of what is found in al-Farghānī, condensed what little he did use of it, and restated and rearranged the matter into a more effective plan. Indications are equally strong for his using Macrobius’ Commentary on the Dream of Scopio as for al-Farghānī’s Elements, although Macrobius is rarely mentioned.

Commetaries on The Sphere were written by Michael Scot between 1230 and 1235; by John Pecham, a Franciscan, sometime before 1279; by the Dominican Bernard of Le Treille between 1263 and 1266; and by Campanus of Novara between 1265 and 1292. Robertus Anglicus gave a course of lectures of Sacrobosco’s Sphere at either the University of Paris or the University of Montpellier in 1271, which helps to date his own commentary. He stated that for the most part The Sphere was so clear it needed no further explanation.

Cecco d’Ascoli was the earliest of the fourteenth-century commentators on The Sphere (probably before 1324). The Dominican Ugo de Castello (Ugo di Cittá di Castello) wrote a commentary on The Sphere that was begun at Paris and finished at Florence in 1337. On 19 October 1346, at Ghent, Henry of Sinrenberg, an Augustinian friar, completed a commentary on The Sphere, in which he addressed friends and fellow Augustinians in the studium of the monastery of Milan. This indicates the wide geographical spread of the use of The Sphere, beyond universities to convent schools. Blasius of Parma commented on The Sphere in the late fourteenth century.

Fifteenth-century commentators included Prosdocimo de Beldemandis in 1418 and Franciscus Capuanus de Manfredonia about 1475. Their works are quite detailed and concern any subject that might be even remotely connected with The Sphere. Other commentators of this period were Jacques Lefévre d’étaples, Wenceslaus Faber of Budweis, and Pedro Ciruelo of Daroca (his commentary was published in February 1498). Incunabula editions of Sacrobosco’s Sphere were brought out by Gasparino Borro (d. 1498), a Servite: and by George of Montferrat. Fausto Andrelini, the Italian humanist, lectured on The Sphere while at the University of Paris in 1496.

The De computo ecclesiastico or De anni ratione, written about 1232 and probably after The Sphere. points out the increasing error in the Julian calendar and suggests a remedy markedly similar to the one actually used under Gregory XIII, some 350 years later, in the revision of the calendar. It was printed at Paris in 1538(?), 1550, and 1572, and at Antwerp in 1547 and 1566.

Sacrobosco’s De computo ecclesiastico deals with the division of time—marked out by the movements of the sun and moon and their interrelationship—into days and years. A discussion of the sun and its influence on the lengths of days, months, and years forms the first half of the work. In the second half, similar considerations are applied to the moon. The solar and lunar years, the solar and lunar cycles, intercalary days, and the movable feasts are examined.

De algorismo discusses the art of calculating with nonnegative integers. The work contains eleven chapters and examines numeration, addition, subtraction, mediation, duplication, multiplication, division, progression, and extraction of both the square and cube roots of numbers. Mediation is the halving of a given number, and duplication is the doubling of a number. Six rules of multiplication are included, depending on what combination of digits and articles are to be multiplied. Natural progression begins with the number one and the difference between adjacent numbers is one. Broken progression begins with the number two and the difference between adjacent terms of the progression is two. Two rules are given for finding the sum of terms in a natural progression, depending on whether the last term is an odd or even number. In the section on extracting roots, lineal, superficial, and solid numbers are first defined and their properties listed. Lastly, methods of extracting the square and cubic roots of a number are discussed.

Throughout the work examples of various arithmetic processes are included, and diagrams are supplied to facilitate understanding the method.

The De algorismo or De arte numerandi was first printed without date or place (1490[?]). It was later printed at Vienna by Hieronymus Vietor in 1517, at Cracow in 1521 or 1522, at Venice in 1523, and on occasion printed with The Sphere It was later printed and on occasion printed with It was the most widely used manual of arithmetic in the Middle Ages. Copies abound in manuscript form: some forty-three are in the Vatican holdings alone. Peter Philomenus of Dacia wrote a commentary on De algorismo toward the close of the thirteenth century, a copy of which is included in Holliwell’s Rata mathematica of 1841.