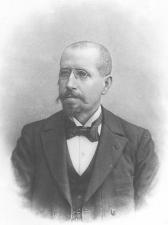 After having studied at the lycées at Nîmes and Montpellier, Darboux was admitted in 1861 to both the École Normale Supérieure and the École Polytechnique in Paris; in both cases he placed first on the entrance examinations. This—and the fact that he selected the École Normale—brought him a good deal of publicity. While a student at the École Normale, he published his first paper on orthogonal surfaces, which he studied in more detail in his doctoral thesis, Sur les surfaces orthogonales (1866).

From 1867 to 1872 Darboux taught in secondary schools. In the latter years his growing fame brought him a teaching position at the École Normale that he held until 1881. From 1873 to 1878 he held the chair of rational mechanics at the Sorbonne as suppléant of Liouville. In 1878 he became suppléant of Chasles at the Sorbonne, and two years later succeeded Chasles in the chair of higher geometry, which he held until his death. From 1889 to 1903 Darboux served as dean of the Faculté des Sciences. In 1884 he became a member, and in 1900 the secrétaire perpétuel, of the Académie des Sciences. A representative figure, Darboux was a member of many scientific, administrative, and educational committees and held honorary membership in many academies and scientific societies: Lebon (see below) lists more than a hundred.

Darboux was primarily a geometer but had the ability to use both analytic and synthetic methods, notably in the theory of differential equations. Conversely, his geometrical way of thinking enabled him to make discoveries in analysis and rational mechanics. Thus he followed in the spirit of Gaspard Monge, and Darboux’s spirit can be detected in the work of Élie Cartan. This characteristic of Darboux’s approach to geometry is fully displayed in his four–volume Leçons sur al théorie générale des surface (1887–1896), based on his lectures at the Sorbonne. This collection of elegant essays on the application of analysis to curves and surfaces is held together by the author’s deep understanding of the connections of various branches of mathematics. There are many, sometimes unexpected, applications and excursions into differential equations and dynamics. Among the subjects covered are the applicability and deformation of surfaces; the differential equation of Laplace,

and its applications; and the study of geodesics (these also in connection with dynamic systems) and of minimal surfaces. Typical is the use of the moving trihedral. Relying on the classical results of Monge, Gauss, and Dupin, Darboux fully used, in his own creative way, the results of his colleagues Bertrand, Bonnet, Ribaucour, and others.

In his Leçons sur les systèmes orthogonaux (1898), he returned to his early love, with new results: the cyclids, the application of Abel’s theorem on algebraic integrals to orthogonal systems in n dimensions, and other novel types of orthogonal systems. Earlier tha these two books was Sur une classe remarquable de courbes algébriques (1873), in which he made an analytic and geometric investigation of the cyclids, of which an early example had been given by Dupin and which can be obtained by inversion from quadrics. Full use is made of imaginary elements, in the tradition of Poncelet and Chasles.

Darboux also did research in function theory, algebra, kinematics, and dynamics. His appreciation of the history of science is shown in numerous addresses, many given as éloges before the Academy. He also edited Joseph Fourier’s Oeuvres (1888–1890).