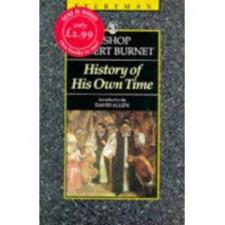 Little is known of Burnet’s family or early childhood other than that his father was John Burnet and that he attended the Freeschool of Northallerton, where he attracted the attention of his teacher, Thomas Smelt. In 1651 he was admitted as pensioner at Clare Hall, Cambridge. Although he was officially a student of William Owtram’s and closely associated with John Tillotson, he was most influenced by Ralph Cudworth. Sometime after receiving his bachelor’s degree in 1655, Burnet followed Cudworth to Christ’s College, became a fellow of the college in 1657, and received his M.A. in 1658. He became proctor of the college in 1667 and remained listed as a fellow until 1678, even though he was not in residence all of that time. While at Cambridge, Burnet worked closely with the Cambridge Platonists, especially Cudworth and Henry More. In 1671 he went abroad as governor to the young earl of Wiltshire and later made a second tour of Europe with the grandson of the duke of Ormonde, the earl of Orrery. During his travels he started writing his theory of the earth, the first two parts of which he completed soon after his return to England.

Burnet published these two parts, the books concerning the Deluge and Paradise, under the title Telluris theoria sacra in Latin in 1681 and produced an English version in 1684. The immediate reaction to the book was favorable. Many praised the style and thought; a few questioned the theory. In 1685 Burnet, who had been ordained in the Anglican Church, was made Master of the Charterhouse at the recommendation of the duke of Ormonde. In 1686, when the king tried to have Andrew Popham, a Roman Catholic, admitted as a pensioner at the Charterhouse, Burnet effectively opposed the appointment. Shortly after William III ascended the throne, Burnet became chaplain in ordinary to the king and clerk of the closet.

During this time The Sacred Theory of the Earth had become a subject of controversy. Christianus Wagner, Herbert Crofts, bishop of Hereford, and Erasmus Warren attacked it. For a time Burnet ignored the criticisms, then answered by expanding his theory. In 1689 he published a new Latin edition containing two additional books, and in 1691 he completed a similar English edition that included his “Review of the Theory of the Earth” and a reply to Warren’s objections.

The Sacred Theory of the Earth was Burnet’s attempt to combine the idealism of the Cambridge Platonists, Scripture, and an explanation of the features of the earth’s surface in order to account for the past and present states of the earth and to offer a prophecy about its future. He believed that there werte four major events in the earth’s history; its origin from chaos, the universal deluge, the universal conflagration, and the consummation of all things. The first two of these had already happened; the last two were yet to come. These four events divided the history of the earth into three periods. The first, from, the Creation to the Deluge, Burnet described as the state of paradise and the antedeluvian world. This earth differed in form and constitution from the present earth. Its surface, which covered the waters and a great abyss, was smooth, regular, and uniform, without mountains or seas. The material of this surface was moist, oily earth suitable to sustain living things. When the surface caved into the abyss, an event due to the continued drying action of the sun, and was no longer smooth, the fluctuations of the waters over this irregular earth caused the universal deluge. This marked the end of the first period.

The second, or present, era was for Burnet the age between the Deluge and the Conflagration. During this time the surface and interior of the earth undergo slow but continual change and thus, when the time comes in the plan of Divine Providence, the earth will be ready and able to burn. The final period, that of the millennium, is the era following the universal conflagration, when there will be a new heaven and a new earth in which the blessed will enjoy a life of peace and tranquillity. At the end millennium the earth will be changed into a bright star, and the consummation of all things predicted in Scripture will be fulfilled.

The expanded theory occasioned more controversy and more replies from Burnet. In 1692 he attempted to reconcile the account of creation in Genesis with his theory in Archaelogiae philosophicae. This book aroused such opposition for its allegorical treatment of Scripture that Burnet, although he had dedicated the book to William III, was forced to resign his position at court. He retired to the Charterhouse and remained there until his death. He was buried in the vault of the Charterhouse chapel a week after he died.

Burnet spent the last years of his life writing in defense of his theory. Most of the attacks upon it were upon religious grounds. Warren, Crofts, John Beaumont, and others accused him of a too liberal or allegorical interpretation of Scripture or or eliminating the necessity of God’s working in the universe. John Keill however, attacked the Cartesian mechanical basis of the theory and refuted it in terms of Newtonian mechanics. In his replies to these, Burnet either reiterated his own interpretation of Scripture or, when unable to refute a logical or mathematical argument against him, pointed out a minor inconsistency in his opponent’s work. In his later, minor writings, he applied his method of scriptural interpretation to theological questions.

Burnet’s importance in the history of scientific thought is due less to his theory itself than to certain aspects of it that became standards in the then growing science of geology. For more then a hundred years after Burnet, writers discussing the origin of and changes in the surface of the earth felt impelled to reconcile their theories with the account of creation in Genesis. His emphases on the importance of the Deluge and on the explanation of the formation of mountains continued in geologic writings. Finally Burnet’s style was such that The Sacred Theory of the Earth was considered readable long after his death and the ideas expressed in it were widely disseminated. Whether accepted or ridiculed, the theory helped popularize the idea that the features of the earth’s surface were constantly changing.

Other works by Burnet are De statu mortuorum et resurgentium liber. Accessit epistola (ad virum clarssimum A.B.) circa libellum de archaelogiis philosophicis (London, 1720), trans, into English as Of the State of the Dead and of Those That Are to Rise (partial ed., London, 1727; complete ed., 1728); De fide et officiis Christianorum (London, 1722), trans. into English as The Faith and Duties of Christians (London, 1728); De future judaecorum restauratione (London, 1727), an appendix to the 1727 ed., of De Statu Mortuourn; and A Re-survey of the Masaic System of the Creation With Rules for the Right Judging and Interpreting of Scripture. In Two Letters to a Friend (London, 1728).

oxford
views updated
Burnet, Thomas (1635?–1715) A natural philosopher whose Sacred Theory of the Earth (1680, 1689) was an early diluvialist work. He tried to correlate the seven days of creation with Earth history, describing the Earth as a giant shell from which flood waters gushed when it was broken by God in the Deluge. The broken fragments of the crust formed mountains. See DILUVIALISM.

perigee , perigee (astron.) point in the orbit of a planet that is nearest to the earth. XVI. In early use varying with forms directly repr. L. and Gr.; — F. p… Fullers Earth , fuller's earth 1. A clay consisting mainly of expanding smectites such as montmorillonite used industrially for its absorptive properties. 2. Capital… Hollow Earth , Edmund Halley (1656–1742) is best known for having calculated the orbit of a comet that passes by Earth every 76 years. The comet known as Halley's m… Earthy , Skip to main content earthy earth·y / ˈər[unvoicedth]ē/ • adj. (earth·i·er , earth·i·est ) resembling or suggestive of earth or soil: an earthy smell… Gaia Hypothesis , The Gaia (pronounced guy-ah) hypothesis is the idea that Earth is a living organism and can regulate its own environment. This idea argues that Earth… Stanley Keith Runcorn , Runcorn, Stanley Keith RUNCORN, STANLEY KEITH (b. Southport, Lancashire, England, 19 November 1922; d. San Diego, California, 5 December 1995), geoph…