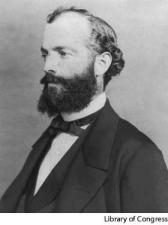 Friedrich August Kekulé was born on September 7, 1829, in Darmstadt, Hesse (later part of Germany). He showed an early aptitude for both languages and drawing and wanted to be an architect. He began his architecture studies at the University of Geissen in 1847, but after attending the lectures of the famous chemist Justus von Liebig he switched to chemistry. Kekulé had great interest in the theoretical aspects of chemistry, and less in the more practical applications that so interested von Liebig. On von Liebig's advice Kekulé went to Paris in 1851 to further his chemical studies.

Paris during the 1850s was an ideal place for a young scientist, as there was a great deal of interest in that city in theoretical chemistry, particularly in the structure of molecules. Preexisting ideas (such as the dualism of Swedish chemist Jöns J. Berzelius) stressed that molecules formed because of the inherent electrical charges that individual elements possessed (which were sometimes opposing and therefore attractive). Organic molecules were not in keeping with the dualism concept, but some scientists proposed that they could be derived from a number of simple inorganic molecules.

Kekulé returned to Germany in 1852, obtained his doctoral degree at Geissen in that year, and then spent a year working in Switzerland. This was followed by two years in London (1853–1855), where he met the chemist Alexander Williamson. Williamson had extended Charles Gerhardt's "type theories" to explain how ethers could be derived from the water type. Kekulé, with Williamson's encouragement, extended type theory further and introduced a new type—the methane or marsh gas type. This led to the development of the tetravalent model of carbon and the understanding that carbon forms rings and chains.

Kekulé's principal insight was to realize that type theory did not take into account the specific combining power (or valences) of specific atoms. In 1857 Kekulé suggested that carbon was tetravalent, his suggestion based on the specific chemistries of the compounds that carbon formed with elements such as hydrogen (CH4) and chlorine (CCl4). Kekulé extended his ideas in the following year by suggesting that two carbon atoms bonded together in the formation of hydrocarbons such as ethane (C2H6). Similarly, additional carbon and hydrogen units could be added, extending the carbon atom chain and forming an ordered series. A similar structural theory was developed independently at around the same time by the Scottish chemist Archibald Scott Couper, working in the laboratory of Adolphe Wurtz in Paris. Publication of Couper's paper was delayed by Wurtz (until Kekulé's had appeared) and the structural theory of organic chemistry is really a culmination of the efforts of Kekulé and Couper.

Kekulé was offered the position of professor of chemistry at the University of Ghent in Belgium in 1858. There his linguistic abilities stood him in good stead, as he had to lecture in French. In 1867 Kekulé was called to the University of Bonn and remained there until his death, on July 13, 1896.

In 1859 Kekulé started to use graphical representations of organic molecules, in part to emphasize the tetravalent nature of carbon atoms and their ability to form chains. He then turned his attention to the structure of benzene (C6H6), a compound with unusual properties that could not be explained by any theories of the day.

Kekulé proposed in 1865 that benzene had a structure in which six carbon atoms formed a ring, with alternating single and double bonds. However, the chemistry of benzene was not always consistent with this structural formula. (All of the carbon atoms in a benzene molecule were equal and equivalent in terms of the reactions of benzene.) To overcome this problem, Kekulé suggested in 1872 that there were two forms of benzene, in dynamic equilibrium . Kekulé's dynamical theory proved to be only partially correct. In 1933 Linus Pauling used quantum mechanics to explain more fully the nature of benzene.

On March 11, 1890, on the occasion of the twenty-fifth anniversary of his announcement of his benzene theory, Kekulé gave a speech in Berlin in which he revealed that both his structural theories and the structure of benzene were revealed to him in dreams. Scholars have tended to dismiss his account of his own creative processes and have placed more stock in the early training that Kekulé received in architecture as the key to his inspiration.

Before Kekulé dreamed of his structure for benzene, Josef Loschmidt proposed the ring structure of the molecule. Unfortunately, Loschmidt did not publish his theory in a widely read scientific journal. As a result, the credit for this revolutionary theory is hotly debated today.

The German chemist Friedrich August Kekulé (1829-1896) was the founder of structural organic chemistry.

August Kekulé, later Kekulé von Stradonitz, was born on Sept. 7, 1829, in the city of Darmstadt. After studies in the local gymnasium, young August, obedient to his father's wishes, enrolled in the school of architecture at the University of Giessen. At school Kekulé demonstrated a great talent for mathematics and drawing. It was in chemistry, however, a discipline then grappling with the complexities of the structure of organic molecules, that Kekulé's mathematical bent, excellent memory, and sense of space made him an ideal student of baffling structural problems.

Supported by his affluent family, Kekulé was able to study in Paris, where he gained the friendship of the eminent chemist Charles Gerhardt, from whose theory of types he later evolved his own theory of valency. He also moved in the scientific circles of Jean Baptiste Dumas and Charles Wurtz, whose school of organic chemistry was the only one in Europe that was able to rival the later German institutes. After his Paris studies Kekulé moved to London, where he worked as an assistant to John Stenhouse and later worked with William Williamson and Reinhold Hoffmann. From 1855 to 1858 Kekulé followed up his apprenticeship by serving as privatdozent at Heidelberg. Later in 1858 he was professor of chemistry at Ghent and ended his scientific career at the University of Bonn, where he served from 1867 until his death on July 13, 1896. During this long tenure Kekulé contributed to the spectacular rise of organic chemistry and the chemical industry of Germany. His students came from all over Europe and went out to take leading professorships and to head industrial laboratories.

Kekulé was not a master experimentalist, but he became an inspired pedagogue. His mind was keyed to the problems of theory, particularly to the understanding of the architecture of the scores of new organic molecules that chemists were isolating from the plant and animal worlds and creating in their laboratories. It was Kekulé who brought order out of this chaos by grasping the fact that the secret of organic chemistry is contained in the tetravalency of the carbon atom and that this element has the unique capacity to link in long chains, with endless isomeric combinations possible.

Kekulé's supreme contribution to organic chemistry grew out of his solution to the problem of the structure of benzene (C6H6), the simplest of the aromatic series of carbon compounds. His solution to this puzzle, as told in his own words in 1865, was: "There I sat and wrote my Lehrbuch, but it did not proceed well, my mind was elsewhere. I turned the chair to the fireplace and fell half asleep. Again the atoms gamboled before my eyes. Smaller groups this time kept modestly to the background. My mind's eyes, trained by visions of a similar kind, now distinguished larger formations of various shapes. Long rows, in many ways more densely joined; everything in movement, winding and turning like snakes. And look, what was that? One snake grabbed its own tail, and mockingly the shape whirled before my eyes. As if struck by lightning I awoke. This time again I spent the rest of the night working out the consequences." From the dream of Kekulé had emerged the now familiar ring structure of benzene.

August Kekule Von Stradonitz , Kekule von Stradonitz, (Friedrich) August Kekule von Stradonitz, (Friedrich) August chemistry Kekulé was descended from the Czech line of an old Bohe… Aleksandr Mikhailovich Butlerov , Butlerov, Aleksandr Mikhailovich Butlerov, Aleksandr Mikhailovich (b. Chistopol, Kazanskaya [now Tatarskaya, A.S.S.R.], Russia, 6 September 1828; d.a… Stereochemistry , Stereochemistry is the study of the three dimensional shape of molecules and the effects of shape upon the properties of molecules. The term stereoch… Hydrocarbon , A hydrocarbon is any chemical compound whose molecules are made up of nothing but carbon and hydrogen atoms . Carbon atoms have the unique ability to… Isomer , Isomer Isomer is the term used to describe two or more chemical compounds which can be represented by the same chemical formula . There are two main… Atomic Theory , One of the points of dispute among early Greek philosophers was the ultimate nature of matter. The question was whether the characteristics of matter…