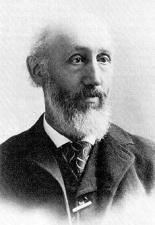 Hough’s main contributions to astronomy were his discovery of 627 double stars and his floating island theory for the great red spot on the planet Jupiter, which planet he diligently observed for almost three decades. On the practical side he devised many instruments with astronomical and meteorological applications.

Born in the Mohawk Valley some thirty miles northwest of Albany, Hough was the son of Magdalene Selmser and William Hough, both of whom were descended from early German settlers. After attending schools in Waterloo and Seneca Falls (towns in the Finger Lakes region), Hough matriculated at Union College in Schenectady, where he received an M.A. degree in 1856. Two years as a school principal in Dubuque, Iowa, were followed by a year of graduate study at Harvard University. In 1859 he became assistant to O. M. Mitchel, an influential popularizer of astronomy who was then director of the Cincinnati Observatory. In 1860 Mitchel moved to Dudley Observatory in Albany, taking Hough with him; when Mitchel was recalled into the armed services (he died a major general in 1862) Hough succeeded him as director.

Hough married Emma C. Shear in 1870. He remained at Dudley until 1874, when he left to become a businessman. But in 1879 he returned to astronomy, accepting the directorship of Dearborn Observatory in Chicago. This institution was owned and run by the Chicago Astronomical Society, but located on the Douglas Park campus of the original University of Chicago (now defunct). Hough planned and supervised the removal of the observatory to the campus of Northwestern University in Evanston, Illinois, where it reopened in 1889; he continued as its director—also serving as professor of astronomy at Northwestern—until he died.

Hough began his observations of planets and double stars in Albany, but concurrently he was called upon to map star fields. To simplify the timeconsuming (prephotographic) mapping techniques, he devised a machine that would print out color-coded dots on a chart directly from the telescope settings. Most of his mechanical skill at that time, however, went into meteorological instruments, such as a selfregistering mercury barometer and a recording anemometer.

In 1869 Hough led Dudley’s expedition to Mattoon, Illinois, to observe the total solar eclipse of 7 August. With a recording chronometer he had designed in 1865, he there obtained the first accurate timing (5.5 seconds) for the duration of “Baily’s beads” preceding totality, and during the total phase of the eclipse he and other members of his party made telescopically what appears to have been the first daylight observation of meteors, presumably members of the Perseid shower.

At Dearborn, Hough began his systematic observations of Jupiter, using a micrometer to locate the various spots and bands. He also took up in earnest his search for new double stars, inspired by his association with S. W. Burnham.

In 1891 Hough received an honorary LL. D. from Union College, and in 1903 he was elected a foreign associate of the Royal Astronomical Society in London. He was also an honorary member of the Astronomische Gesellschaft in Leipzig and a corresponding member of the American Philosophical Society. His instruments won him many medals, notably at the Centennial Exposition in Philadelphia in 1876 and at the Chicago World’s Fair in 1893.

Many of the instruments that Hough designed (and built, usually with his own hands) are described in Annals of the Dudley Observatory, 1 (1866), and 2 (1871). Here also will be found tabulations and charts of his meteorological observations from 1865 through 1870. Two articles, both entitled “Description of a Printing Chronograph,” in Silliman’s American Journal of Science and Arts, 3rd ser., 2 (1871), 436–440, and in Payne’s Sidereal Messenger, 5 (1886), 161–167, describe improvements to the original instrument of 1865. “Electrical Clock Connections for Operating the Chronograph,” appeared in Astronomy and Astro-Physics, 13 (1894), 184–187. The electric drive Hough devised for the 18 1/2-inch Dearborn refracting telescope was described in “An Electric Control for the Equatorial,” ibid., 524–527, with illustration facing 521.

Hertzsprung-russell Diagram , Hertzsprung-Russell Diagram A Hertzsprung-Russell diagram, or HR diagram, is a graph of stellar temperatures (plotted on the horizontal axis) and lum… Double Star , double star Two stars that appear close together in the sky. There are two types of double star: binary stars and optical doubles (two stars that are… Double , Double The etheric counterpart of the physical body which, when out of coincidence, may temporarily move about in space in comparative freedom and ap… Sir William Herschel , The German-born English astronomer Sir William Herschel (1738-1822) discovered the planet Uranus, the intrinsic motion of the sun in space, and the f… Sir Frank Watson Dyson , astronomy. On graduating in the mathematical tripos at Cambridge, England, as second wrangler in 1889, Dyson began research on gravitational problems… John Michell , MICHELL, JOHN astronomy. Michell earned a permanent place in the history of stellar astronomy for two signal accomplishments: he was the first to mak…