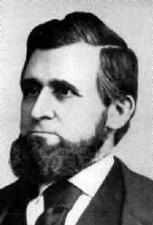 The American agriculturalist Oliver Hudson Kelley (1826-1913) founded the Grange of the Patrons of Husbandry and was devoted to improving conditions for farmers.

Oliver Hudson Kelley was born and educated in Boston. He went west to Illinois for awhile, then to Minnesota in 1849, where he became a farmer and Indian trader. Kelley's wife died in 1851, and the following year he married a schoolteacher who also had come west from Boston.

Kelley quickly became a champion of Minnesota and of the farmer, whom he considered the indisputable source of wealth in America. Following a drought in 1862-1863, Kelley's Minnesota farm operations became unprofitable, and in 1864 he found employment as a clerk in the U.S. Department of Agriculture in Washington, D.C. He returned to Minnesota in 1865 to prepare a report for the Federal government on agricultural conditions. In January 1866 he was commissioned to make a survey of the agricultural situation in the South. He made a 3-month tour of the Carolinas, Georgia, Alabama, and Tennessee before returning to his Minnesota homestead.

For some time Kelley had toyed with the idea of establishing an organization of farmers for self-improvement, a secret fraternity patterned on the Masonic Order. However, this group would be closely allied to the Federal government, and women would participate equally with men. Together with a fellow government employee, he founded the Grange of the Patrons of Husbandry in 1867. Kelley zealously crusaded to organize local granges, and by 1874, 20,000 had been chartered, chiefly in the Middle West and South. Kelley emphasized the fraternal, social, psychological, and educational goals of the Grange, but it was later apparent that he had hoped to establish national solidarity among the farmers, thereby minimizing the sectional hatred that had been engendered by the Civil War.

Between 1870 and 1875 Kelley lived in Washington, D.C., as national secretary of the Grange. Turning his attention to real estate promotion in Florida, he moved to Carra-belle, a townsite he had founded. Three years later he resigned his position with the Grange to devote himself to land promotion. His life in Florida is little known; apparently he was not financially successful, for he returned to Washington and accepted a pension from the National Grange in 1905. The significant achievement of Kelley's life is detailed in his book, Origin and Progress of the Order of the Patrons of Husbandry in the United States.

The basic information on Kelley's life is in Solon J. Buck, The Granger Movement (1913). Additional evidence is in Thomas Clark Atkeson, Semi-centennial History of the Patrons of Husbandry (1916); Edward Weist, Agricultural Organization in the United States (1923); and Charles M. Gardner, The Grange: Friend of the Farmer (1949). □