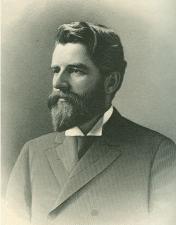 Leonidas Lafayette Polk (1837-1892), American agrarian crusader, editor, and orator, ranks among the foremost of the South's post-Civil War champions of the farmer.

Of sturdy yeoman stock, Leonidas L. Polk was born on April 24, 1837, in Anson County, N.C. He bypassed formal education to become a farmer like his father. During the Civil War, he served two terms in the state legislature and also saw military duty with two North Carolina regiments. He was a valued member of the state constitutional convention summoned immediately after the conflict.

Polk's heart, however, was always in farming. In 1870 he began an almost one-man crusade for the creation of a state department of agriculture. When such an agency was created 7 years later, he became its first commissioner. He held this post until 1880, when he assumed editorship of the Raleigh News and Observer and began an even more concerted drive to improve agricultural standards in his state.

In 1886 Polk established the Progressive Farmer. This newspaper became a leading organ of southern farm sentiment. At first his editorials treated the technical aspects of agriculture, but his writing quickly developed political overtones. He urged readers to organize "farmers' clubs" so as to exert greater lobbying influence on the state legislature. One direct result was the establishment in Raleigh of a land-grant agricultural college (now North Carolina State University).

Meanwhile, the rural-dominated National Alliance movement had rapidly spread across the nation and become the leading influence in the Democratic party of the South. When the Alliance movement reached North Carolina, Polk eagerly joined and was soon head of the state organization. In 1887 he was elected national vice president of the Alliance; 2 years later, he became its president. The Alliance reached its zenith under Polk's leadership.

The rise of the Populist party in the early 1890s seemed to Polk to offer the only hope for widespread agrarian reform. He transferred his energies to that third political party and was soon one of its key spokesmen. He was a leading candidate for first or second place on the Populist presidential ticket of 1892 but died on June 11.

Polk was a rough and forceful speaker who appealed to the masses. He never forgot—nor would he let his listeners forget—that he was a product of the land. His settling hand checked much of the turbulence within the Alliance and the Populist party.

The one comprehensive and reliable treatment of Polk is Stuart Noblin, Leonidas Lafayette Polk: An Agrarian Crusader (1949). For varying interpretations of Polk's reform measures see W. Scott Morgan, History of the Wheel and Alliance and the Impending Revolution (1889); Simeon A. Delap, The Populist Party in North Carolina (1922); and Theodore Saloutos, Farmer Movements in the South, 1865-1933 (1960). □