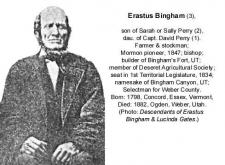 Erastus studied theology and philosophy at Basel from 1540 to 1544 and medicine at Bologna and Padua from 1544 to 1555, receiving the M.D. in 1552. While in Bologna he married Isotta a Canonici; they had no children. At Meiningen he was physician to Count William of Henneberg in 1557, and the following year he became professor of medicine at Heidelberg. His anti-Calvinist attitude—he believed in granting the state supremacy in all ecclesiastical affairs, a doctrine that came to be called Erastianism—led to his fall from the favor of Frederick III, elector palatine. In 1580, therefore, he left Heidelberg for Basel, where he became professor of theology and moral philosophy.

Erastus is remembered chiefly as an inexorable and abusive critic of astrology, natural magic, and particularly of Paracelsus and iatrochemistry. He condemned such superstitious practices as the curative use of human blood and parts of corpses and of amulets in the cure of epilepsy, but he firmly believed in Satan, demons, and witches—accusing the witches, against the claims of their defenders (Wierus and others) that they were victims of drug-induced hallucinations, of true cohabitation with the devil. A successful physician with great experience in the use of watering places (Bad Kissingen), he strictly adhered to traditional humoralism and ancient medical practice but nevertheless criticized Galen.

Erastus laced his rational arguments heavily with theological dogma and polemics, yet on occasion he made sound observations, such as tracing vitriol and alum in mineral water with oak gall water. Opposing traditional ideas about the brain, he insisted that what mattered was not its substance but its function and its production of impulses (“spirits”). Erastus also demolished the Galenic theory that epilepsy was caused by obstruction of pathways by viscid mucus, since such a theory could not explain why sensation was disturbed but motility was not. He recognized forms of petit mal manifested by dizziness, hiccups, or excessive sneezing.

No two events in nature, Erastus contended, are equal in cause and effect: hence the futility of forecasting. According to him, heaven acts in conformity with a general plan and does not interfere with the course of events that are specific for the individual object. For example, it supplies heat and moisture in spontaneous generation, but the process is due entirely to the specific disposition of certain parts of matter. Attempts at astrological divination work through the invocation of demons and therefore are damnable heresy. Furthermore, Erastus said, comets do not foretell evil events, such as wars, pestilence, and the deaths of kings; they are merely terrestrial exhalations and, as such, produce drought and heat—factors not conducive to the outbreak of epidemics.

Erastus’ criticism of Paracelsus was fivefold. First, he criticized Paracelsus’ denial of the existence and universal significance of the elements and humors established in ancient science and medicine and their replacement with the three principles, salt, sulfur, and mercury; these had never been isolated from any object by heat or chemical manipulation. Solidity, inflammability, and volatility were not caused by the presence of any of the three Paracelsian principles but by the proportions in which the four elements of the ancients (air, water, fire, earth) were “mixed” in an object. It was the special mixture of water and subtle earth particles that made mercury prone to go up in smoke. Sulfur was inflammable because of the fire and warm air it contained. Without this air, sulfur would become inert and lose its “sulfurousness.” The solidity of salt showed its kinship with the earth.

Second, Erastus angrily repudiated the significance attributed by Paracelsus to the power of imagination and the conversion of something spiritual into matter; this he regarded as the main part of the natural magic—the “Neoplatonic fallacy”—practiced by Paracelsus. The concepts of microcosm and quintessence were sheer nonsense: how could the human body contain the virtues and materials of all parts of the outside world? Who could show that bread already and actually contains human blood instead of being converted into it when consumed?

Third, disease, according to Paracelsus, was not the disturbance of humoral balance in an individual man (as the ancients rightly taught); man was merely the passive recipient of an outside agent that, like a parasite, takes possession and inflicts its own schedule of life on the organism, thereby consuming it. (This was the parasitistic or ontological concept.) In this, Erastus said, Paracelsus confused disease with its cause and disregarded the functions of organs, which alone decide the character of a disease.

Fourth, the chemical and notably the metallic (mainly mercury) remedies recommended by Paracelsus were nonassimilable poisons. No therapy could work except through the humors. Therefore, potable gold was a magician’s swindle.

Fifth, said Erastus, Paracelsus was an ignorant man, a “grunting swine” who, driven by ambition and vanity, replaced sane teaching with insane delusion, the comprehensible with the incomprehensible, truth with falsehood, and salubrious medicine with pestilential poison. His “cures” were at best temporary and, as a rule, injurious. Although not devoid of some knowledge of chemistry, he was largely a magus informed by the devil and evil spirits.

Many of Erastus’ arguments must have seemed unanswerable to his contemporaries, but he fought a losing battle against iatrochemistry, which through Paracelsians (Turquet de Mayerne, inspired by Oswald Croll) appeared in the first British pharmacopoeia (1618). The Paracelsian concept of disease was further developed by J. B. van Helmont and Harvey and finally became the historical root of the modern concept established in the nineteenth century.

The following, although of no necessity, are a helpful amenity for the student. For Erastiana (correspondence and biographical notes), see Henricus a Leda Smetius, Miscellanea medica (Frankfurt, 1611), and H. Pfister, Bad Kissingen vor Vierhundert Jahren (Würzburg, 1954), pp. 17–26.