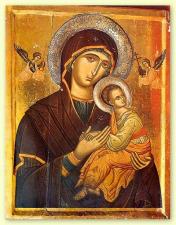 In Byzantine icons and Western medieval art, the most common deathbed scene is that of the Virgin Mary. In her study of Marian iconography, Gertrud Schiller reproduced more than 100 images of Mary reclining in bed surrounded by the apostles who grieve, pray, and in late medieval art perform the rites for the dying. In these images, Jesus either stands at the bedside or hovers above it, and holds Mary's soul in the form of a young child. This scene reflects the belief that Mary was the mother of Jesus, the incarnate Son of God, and therefore enjoyed the privilege of an especially holy death.

Yet the Bible says nothing about Mary's death. This silence, combined with growing devotion to Mary, allowed new material to flourish. The deathbed scene is derived from apocryphal narratives describing Mary's last days and dying, as well as her funeral, burial, resurrection, and assumption into heaven. Versions of this story survive in Syriac and Greek texts dating from the third to the fifth centuries. Emperor Maurice (582–602) set August 15 for the feast of Mary's Dormition (Koimesis, or "falling asleep") throughout the Byzantine church, and since the late seventh century the Roman church has celebrated Mary's Assumption on the same date. Once the feast was officially placed in church calendars, its narratives shaped preaching, doctrine, and art.

In the earliest surviving Greek sermon celebrating Mary's death, the bishop John of Thessalonica (610–649) claims to have edited the different accounts of her death and to tell "only what truly happened" (Daley 1998, p. 49). An angel told Mary that she would die in three days. She summoned her relatives and friends to stay with her for two nights, and asked them to "sing praise instead of mourning." The apostle John arrived, followed by the other apostles who had been carried on clouds from all corners of the earth. During the second night Peter preached, urging all present to "take courage" from Mary and to live virtuously in preparation for their own deaths. The next day Mary lay down in her bed, and Jesus arrived with many angels. When he and the angel Michael entered Mary's room, "Mary brought the course of her life to its fulfillment, her face turned smilingly towards the Lord. And the Lord took her soul and placed it in the hands of Michael" (Daley 1998, p. 63). The funeral followed, but was delayed when an enraged chief priest attacked the bier; his hands stuck to the bier and were amputated until he repented, praised Mary in Hebrew, and was healed. Three days after the burial, the apostles opened Mary's sarcophagus, "but found only her grave-garments; for she had been taken away by Christ, the God who became flesh from her, to the place of her eternal, living inheritance" (Daley 1998, p. 67).

John of Thessalonica's entire sermon, even the disturbing anti-Semitic incident of the chief priest, highlights the importance and power of faith in Mary—specifically in her dying and final transcendence of death itself, for the sermon presents an idealized portrait of Mary dying surrounded by those she loves, supported by Christian rites, and finally reunited with her divine Son who escorts her to reign with him in heaven. And as Peter's preaching within the sermon makes clear, Mary's dormition provides "a model of Christian death" (Daley 1998, p. 69).

The Greek narratives entered the West in a Latin version attributed to Melito of Sardis. In the thirteenth century, Jacobus de Voragine combined several early sources in The Golden Legend 's account of Mary's assumption; as the Legend became the most popular collection of saints' lives of the later Middle Ages, the story of Mary's death assumed new prominence in art and drama. While medieval artworks occasionally illustrate all the major events surrounding Mary's death, they usually limit themselves to two images: the deathbed scene and the coronation in heaven. These images appear in sculpture, stained glass, and manuscript paintings of the private prayer books known as books of hours.

Moreover, in the late Middle Ages the treatment of Mary's death itself takes a more contemporary and realistic turn. Especially in altar paintings, Mary dies within elaborately furnished fifteenth-century rooms, and the apostles perform the prayers and sacramental rites for the dying with a new urgency. As Schiller notes, beginning around 1400 Mary is shown not as having just died, but in the process of dying; and Christ himself is sometimes not in the picture. Similar developments occur in the mystery plays or religious dramas. For example, the York cycle's "Death of the Virgin" presents the full story of Mary's dying, but adds new, concrete details: Mary suffers a painful illness that she hopes will soon end, and John and her attendants openly grieve and need to be quieted by Mary herself. While retaining the exemplary qualities of Mary's death, these images and dramas bring the dormition closer to the realities of late medieval dying.

Although the feast of Mary's Dormition remains a major celebration in Eastern Orthodox churches, Western Christianity has turned away from Mary's death since the Reformation. Protestant churches have generally downplayed devotion to Mary, and Roman Catholicism has increasingly focused on her bodily assumption into heaven, which Pope Pius XII declared official doctrine in 1950. Curiously, Pius's declaration made no mention of Mary's death, and thus bowed to the claim of some Catholic theologians that she was taken bodily to heaven without dying.

Yet in narratives, sermons, images, and plays, the Virgin Mary's death has long offered a powerful, consoling image of the Christian's good death. This was especially the case in the decades before the Reformation when, as Schiller comments, art highlighted Mary's "ability to help individuals who were about to die. Her death . . . was a model; the taking up of her soul by Christ gave consolation and hope: 'Pray for us sinners' was the daily prayer" (Schiller 1980, vol. 4, part 2, p. 133) to the Virgin Mary. For this reason, appeals to Mary also figured prominently in the fifteenth-century treatises on the ars moriendi, or art of dying. Like her exemplary life, Mary's dying has offered a model for Christian imitation and action.

Warner, Martina. Alone of All Her Sex: The Myth and Cult of the Virgin Mary. New York: Knopf, 1976.

oxford
views updated
Mary, Blessed Virgin. The mother of Jesus, counted pre-eminent among the saints. She is prominent in the ‘infancy stories’ in Matthew 1–2 and especially Luke 1–2. According to both gospels, she conceived Jesus while a virgin (see VIRGIN BIRTH OF CHRIST). She appears in the background during his career (Mark 3. 31; Luke 11. 27–8; John 2. 1–11), then at the foot of the cross (John 19. 25), and with the apostles after Easter (Acts 1. 14).

By the earliest Church fathers Mary is mentioned rarely and usually in contrast with Eve. Mariology (devotion to Mary) probably owed much of its impetus to two currents of early and medieval Christian thought: (i) the predilection for celibacy and virginity as a style of life superior to marriage; and (ii) the removal of Jesus from the human level, particularly in breaking the entail of sin (see ORIGINAL SIN). The first of these was congenial to the tradition of Mary's ‘perpetual virginity’ (i.e. even after giving birth to Jesus), which was current by the time of Athanasius, and later to the doctrine of the immaculate conception, according to which Mary was without stain of original sin from the moment of her being conceived. The second current of thought may be observed in the canonization of the title Theotokos (‘Mother of God’) for Mary at the council of Ephesus (431). She eventually became known in the W. Church as ‘co-redemptress’ and ‘mediator of all graces’, the latter title being popularized by St Alphonsus Liguori. The doctrine of her bodily assumption into heaven was first formulated in orthodox circles by Gregory of Tours (d. 594), and was defined as Catholic dogma in 1950.

At the Reformation there was a strong reaction against Marian devotion, partly owing to the rejection of the cult of saints, and partly in keeping with a more positive view of sex and of the married state. The main feasts of Mary are the Assumption (15 Aug.), Nativity (8 Sept.), Annunciation (25 Mar.), Purification (2 Feb.; Candlemas), and Visitation (2 July; in the RC Church now 31 May).

In Islam, Maryam is the mother of ʿĪsā (Jesus); the name is probably derived from Syriac-Christian usage. Sūra 19 of the Qurʾān, ‘Maryam’, relates a version of the annunciation, followed by an account of Maryam's giving birth, alone, at the foot of a date palm (19. 17–33; cf. 3. 45–51, a slightly different version of the annunciation). The ḥadīth relate that Maryam and ʿĪsā were preserved from the ‘touch of Satan’ which affects all children at birth, i.e. were free from sin; further, she is considered one of the four best women of Paradise, along with Fāṭima, Āsiyā (Pharaoh's wife), and Khadīja.