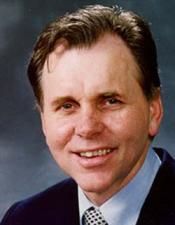 Barry Marshall was born in Perth, Australia. He is a physician with a clinical and research interest in gastroenterology. He is internationally recognized for his discovery that the bacterium Helicobacter pylori is the major cause of stomach ulcers.

Marshall studied medicine at the University of Western Australia from 1969 to 1974. While studying for his medical degree, Marshall decided to pursue medical research. He undertook research in the laboratory of Dr. Robin Warren, who had observations of a helical bacteria in the stomach of people suffering from ulcers.

Marshall and Warren succeeded in culturing the bacterium, which they named Helicobacter pylori. Despite their evidence that the organism was the cause of stomach ulceration, the medical community of the time was not convinced that a bacterium could survive the harsh acidic conditions of the stomach yet alone cause tissue damage in this environment. In order to illustrate the relevance of the bacterium to the disease, Marshall performed an experiment that has earned him international renown. In July of 1984, he swallowed a solution of the bacterium, developed the infection, including inflammation of the stomach, and cured himself of both the infection and the stomach inflammation by antibiotic therapy.

By 1994, Marshall's theory of Helicobacter involvement in stomach ulcers was accepted, when the United States National Institutes of Health endorsed antibiotics s the standard treatment for stomach ulcers.

Since Marshall's discovery, Helicobacter pylori has been shown to be the leading cause of stomach and intestinal ulcers, gastritis and stomach cancer. Many thousands of ulcer patients around the world have been successfully treated by strategies designed to attack bacterial infection . Marshall's finding was one of the first indications that human disease thought to be due to biochemical or genetic defects were in fact due to bacterial infections.

From Australia, Marshall spent a decade at the University of Virginia, where he founded and directed the Center for Study of Diseases due to H. pylori. While at Virginia, he developed an enzyme-based rapid test for the presence of the bacterium that tests patient's breath. The test is commercially available.

Currently, he is a clinician and researcher at the Sir Charles Gairdner Hospital in Perth, Australia.

Marshall's discovery has been recognized internationally. He has received the Warren Alpert Prize from the Harvard Medical School, which recognizes work that has most benefited clinical practice. Also, he has won the Paul Ehrlich Prize (Germany) and the Lasker Prize (United States).