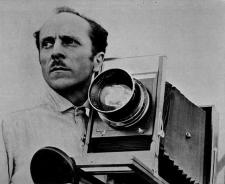 In the 1930s, Edward Weston (1886-1958) helped form the influential Group f/64 with other notable photographers such as Ansel Adams, Imogen Cunningham, and Willard van Dyke. His sharp, brilliantly printed images are some of the finest twentieth-century photographic works. Weston's work helped photography gain recognition as an art form in its own right.

Edward Weston was born on March 24, 1886 in Highland Park, Illinois. As a child, he saved pennies to buy used photographic equipment. At the age of 16, his father gave him a Kodak Bulls-Eye number two camera. Weston began to take pictures at his aunt's farm and in the parks of Chicago. In 1903, at the age of 17, Weston first exhibited his work at the Chicago Art Institute.

After the earthquake and fire in San Francisco on April 19, 1906, Weston traveled to California to take a job as a surveyor for San Pedro, Los Angeles, and the Salt Lake Railroad. Weston returned to Chicago to attend the Illinois College of Photography, but soon returned to California to visit a sister living in a small town near Los Angeles. Remaining in California, Weston helped found the Camera Pictorialists of Los Angeles. In 1909, he married Flora Chandler, with whom he had four sons. Edward Chandler Weston was born in 1910 and Theodore Brett Weston in 1911. The Westons' third son, Laurence Neil Weston, was born in 1916 and Cole Weston in 1919.

Weston owned a portrait studio in Glendale, California. His soft-focus, diffused images and sentimental approach was popular at that time and his business did well. He also began to publish articles in magazines, including American Photography, Photo Era, and Photo-Miniature.

Weston became unhappy with what he felt was just a mechanical imitation of painting styles. Richard Lacayo, in Time magazine described Weston's early career. "By the early 1920s he had already established an international reputation for mildly swoony images in gray-beige tones. He had also grown restless with pictorialism, which took its inspiration from impressionism, symbolism. … In time, he found a new expressive vocabulary in the angles and hard lines of constructivism and cubism, which he matched to a new photographic method. The focus was sharp. The prints were made directly from the negative, without an enlarger. The chemical manipulations that produced the soulful fogs of pictorialism were forgotten."

Although Weston was married and a father of four, he strained against the conventions of family life. His friends were members of the West Coast counterculture, people who shared his interest in vegetarianism and his love of modern art. Shortly after the birth of his fourth son, he met Tina Modotti. This was the beginning of their long relationship and photographic collaborations. Her husband was a political radical in Mexico who died in 1922. Weston traveled to Ohio to visit his sister in 1922. While there he took photographs of the Armco Steel Plant. From Ohio he traveled to New York and met Alfred Stieglitz, Paul Strand, Charles Sheeler, and Georgia O'Keefe. At this point in his career, Weston gave up pictorialism and started a transition period of self-analysis and self-discipline.

In 1923 Weston went to Mexico with Modotti and one of his sons. For the next three years he socialized with several artists including Diego Rivera, José Clemente Orozco, Jean Charlot, and David Alfano Siqueiros. He took pictures, including many portraits. The Mexican portraits illustrate what Weston had learned from photographer Alfred Stieglitz, "maximum of detail with a maximum of simplification." Some of the photographs that Weston and Modotti made in Mexico appeared in the book Idols Behind Altars by Anita Brenner.

In 1926, Weston came back to California. There he started work on a series of highly detailed studies of cabbages, peppers, rock formations, sand dunes, trees bent by the wind, twisted kelp, water, cacti, and seashells. His most famous photographs are exquisitely detailed, richly toned shots of peppers, shells, and cypress trees. He also created studies of the human figure. His technique was uncluttered and direct. Weston used an8x10 inch view camera, always in natural daylight. He used four-hour exposures to capture detail. He never enlarged, cropped, or retouched his photographs. The pictures he made at this time were crucially important in separating him from his previous style. Richard Lacayo wrote in Time, "The pictorialists used soft focus for atmospheric purposes but also as a way to make the particular stand for the general. With these radiant close-ups, Weston kept their goal but reversed the approach, bearing down on the details as a new way to make the mundane suggest the divine. … The forward-looking sectors of the American art audience were waiting for pictures like these, sensuous and sharp.… Forall their shimmer, they had a just-the-facts quality that proposed the romantic impulse as the highest form of lucidity. (That they could also be sexually voluptuous, something Weston claimed was unintended, did not hurt.)" Weston said of his work, "The camera should be used for rendering the very substance and quintessence of the thing itself, whether it be polished steel or palpitating flesh."

Weston moved up the Pacific Coast to Carmel, California, in 1929. There he photographed the rocky beaches and cypress trees at Point Lobos. Near Carmel, Weston also discovered the sand dunes that inspired some of his most important images. His love of nature strengthened his friendship with Ansel Adams, the famous nature photographer, whom he had met a few years earlier.

Weston kept journals or "day books" of his activities and ideas. He first published some of these writings as From My Day Book in 1928. Others were published after he died. In 1930, Weston exhibited his work in New York for the first time at the Delphic Studios Gallery and later at Harvard Society of Contemporary Arts with Walker Evans, Eugene Atget, Sheeler, Stieglitz, and Modotti. Weston was a founding member of Group f/64 that formed in 1932 and included Ansel Adams, Imogen Cunningham, Consuelo Kanaga, and Willard van Dyke. This influential group was dedicated to the highly detailed prints that resulted from using a large camera with a very small aperture. They set their lenses to that aperture, f/64, to gain maximum image sharpness of both foreground and distance. Even though he had several large exhibitions, Weston still did not earn a lot of money. In 1935 he started the "Edward Weston Print of the Month Club" selling photographs at $10 each.

In 1937 Weston received the first Guggenheim Foundation fellowship in photography. Using his prize money he traveled through the western United States, taking along his model and assistant Charis Wilson. Weston and Wilson married in 1938. On the trip west, Weston took pictures that later appeared in his book California and the West, published in 1940, with text by Charis Wilson Weston. The relationship between Weston and Wilson helped form his vision of the naked female form as a photographic subject. Critic Susan Sontag was quoted in Time as saying, "The peppers Weston photographed are voluptuous in a way his female nudes rarely are. In fact, he made nude photography respectable."

In 1940 he participated in the U.S. Camera Yosemite Photographic Forum with Ansel Adams and Dorothea Lange. He was commissioned by the Limited Editions Club to illustrate a new edition of Walt Whitman's Leaves of Grass, published in 1941. In 1951 Weston became an honorary fellow of the Photographic Society of America.

In 1946 Weston began experiencing the symptoms of Parkinson's disease, an illness characterized by muscle tremors, slowing of movement, and weakness. Weston took his last photographs at Point Lobos in 1948. In 1952 his Fiftieth Anniversary Portfolio was published with his images printed by his son Brett. In 1955 Weston chose several of what he called "Project Prints" and had his sons Brett and Cole and Dody Warren print them under his supervision. Lou Stoumen released the film The Naked Eye in 1956 in which several of Weston's prints and footage of Weston himself appeared. Edward Weston died at his home in Carmel Highlands, California, on January 1, 1958.

Weston's work influenced many photographers such as Minor White, Paul Caponigro, Wynn Bullock, Cole Weston, and Brett Weston. In 1975 the Museum of Modern Art in New York City held a major retrospective of his work.

The centennial of Weston's birth in 1986 was marked by three museum shows. The J. Paul Getty Museum in Malibu, California, exhibited 45 of his pictures. Sixty were shown at the Art Institute of Chicago. The San Francisco Museum of Modern Art held a retrospective of 237 prints. The exhibition traveled for two years to a dozen other cities, including New York, Washington, Los Angeles, and Atlanta. The centennial of his birth was noted on the Monterey Peninsula by two major shows as well as by a lecture and seminar by his son, photographer Cole Weston. At the Friends of Photography Gallery in Carmel, his trademark works, close-ups of seashells, the rocks and trees of Point Lobos, nudes, and sand dunes were shown. At the Monterey Peninsula Museum of Art "The Monterey Photographic Tradition: The Weston Years" exhibited some 100 works by Edward Weston, his sons Brett and Cole, and others including Ansel Adams, Morley Baer, Al Weber, and Minor White. By juxtaposing photographs of similar subjects by different artists, the exhibition illustrated how the photographers influenced one another.

Commenting on the San Francisco exhibit, Lacayo noted "his photographs' unique confidence, force and completeness. Seen today, in a time of crayoned prints, tableaux arranged for the camera and photographs about photography, they bear the stamp of a grand and lucid purpose." Weston's Westons: Portraits and Nudes, an exhibition of his work at New York's International Center of Photography, was shown in 1990. An exhibit, The Garden of Earthly Delights: The Photographs of Edward Weston and Robert Mapplethorpe, was shown at the midtown Manhattan branch of the International Center of Photography in 1995.

Weston's goals for his work were clear yet complex: "To photograph a rock, have it look like a rock, but be more than a rock." Weston's greatest achievement was affirming photography's complete independence from painting, thus establishing it as a modern art in its own right.

oxford
views updated
Weston, Edward (1886–1958) US photographer. He developed his style in the 1920s, influenced by Alfred Stieglitz. His aim was to give new meaning to mundane objects.