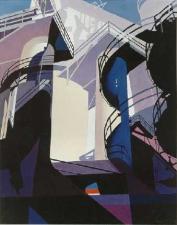 The work of American painter Charles Sheeler (1883-1965) is, in its pragmatic association with the American scene and its consistently lucid technique, central to the precisionist style. His techniques varied from photographic realism to modified abstraction.

Born in Philadelphia, Charles Sheeler attended the School of Industrial Art (1900-1903) and the Pennsylvania Academy of the Fine Arts (1903-1906), studying with the William Merritt Chase. With a fellow student, Morton Schamberg, Sheeler set up a studio in Philadelphia in 1908. In Europe the next year, he and Schamberg were impressed by the elegant formalism of the Italian Renaissance painters. In Paris they experienced some of the ferment of modernism and saw the radical manifestations of Pablo Picasso's and Georges Braque's analytical cubism and the Fauve expressionism of Henri Matisse's painting. After this trip Sheeler devoted himself to working in essentially analytical styles.

In 1910 Sheeler and Schamberg rented a farmhouse in Bucks County, Pa., where they sketched on weekends. Sheeler worked as a commercial photographer and did commissions for local architects. Although he always regarded photography as subordinate to his painting, it became an important means of research for his paintings. He is regarded as one of the pioneers of innovative American camera work.

Sheeler exhibited in the 1913 Armory Show, which dramatically introduced the spectrum of European modernism to America. The exhibition's French section led Sheeler into stronger abstraction; in Landscape (1915) he applied the standard cubist devices of flattened, overlapping, and quasi-transparent planes to build an analytical composition.

The cubist clarity never left Sheeler's painting, although by the mid-1920s he had divested himself of its stylistic mannerisms. (He returned to these in later works.) Church Street El (1920), a dramatic cityscape, brilliantly applies cubist formalism to the American urban scene. In Bucks County Barn (1923) he applied the cubist doctrine to an American countryside subject. Sheeler equated the austere functionalism of anonymous rural American architecture with the complex technical efficiency of present-day industry and alternated between these themes, representing each with objectivity.

Sheeler sought inherently abstract subjects, which he further simplified. Upper Deck (1929), a portrayal of shipboard architecture, is a study of geometric metal shapes. It illustrates the relationship between Sheeler's photographic studies and paintings so pronounced throughout his mid-1920s and 1930s work, evident in the series of photographs and paintings of stairway themes. Sheeler's black-and-white Conté drawings, selectively based on his photography, are particularly strong. Although he used color sensitively, his paintings remain essentially value studies in dark and light. His Bucks County Conté-crayon drawings, such as Interior with Stove (1932), are among his most authoritative. View of New York (1931), an eloquently simple study, consists of shapes floated on a vertical-horizontal grid; a photographer's table, chair, and lamp, seen against a window, are treated as pure abstract elements.

A 1927 photographic assignment from the Ford Motor Company led to such literal works as City Interior (1936), a one-point perspectival view of an industrial street spanned by complex heavy pipes and trusses; tiny figures of workers are isolated in this overwhelming environment. (This is one of the few works in which human figures appear.)

In Sheeler's art all components of the industrial environment were regarded with the same dispassion; he gave as much attention to a wraith of factory smoke as to a gigantic turbine. During the 1940s he moved toward modified abstraction, his paintings more and more rigorously controlled. Devices derived from photography, such as double exposure, provided new sources of abstract forms. These are the basis of such works as Continuity (1957), a factory scene. In his midwestern barn paintings of this period, realistically detailed elements of landscape and rural architecture are prismatically juxtaposed and fused with anonymous shapes derived from surrounding trees, buildings, and clouds. Some compositions of the 1950s combine elements of several sites.

A strongly moralistic attitude characterized Sheeler's choice of subjects; in his paintings, American functionalism merged with technological perfection. He painted a universe whose elements relate in perfect harmony. No storm clouds appear in his blue skies; no sign of deterioration is permitted; old barns avoid picturesque sentimentalism; every field is green. The time is the idealized present. Yet for all his seemingly detached concern with the abstract purity of American rural architecture and the industrial environment, Sheeler remained a highly introspective, lyrical painter.

Paul Cadmus , Cadmus, Paul American artist Paul Cadmus (1904–1999) was a young and unknown painter in 1934, but he became famous overnight when a minor scandal eru… Jan Vermeer , The Dutch painter Jan Vermeer (1632-1675) of Delft transformed traditional Dutch themes into images of superlative poise and serenity, rich with embl… William Sidney Mount , William Sidney Mount (1807-1868), one of America's first and best anecdotal painters, portrayed rural life on Long Island. William Sidney Mount was b… Thomas Eakins , Eakins, Thomas Philadelphia, Pennsylvania Died June 25, 1916 Philadelphia, Pennsylvania Painter A traveling exhibit of the major paintings of Thomas… Painting , painting, direct application of pigment to a surface to produce by tones of color or of light and dark some representation or decorative arrangement… Horace Pippin , Pippin, Horace 1888–1946 Painter The most celebrated African American painter of his time and one of the greatest of any period, Horace Pippin had an…