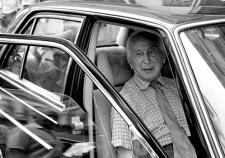 oxford
views updated
Kertész, André (1894–1985) Hungarian-US photographer. He was one of the first to use a compact Leica camera. While in France, Kertész worked as a photo-journalist as well as taking portraits of artist-friends such as Mondrian and Colette. In 1936 he moved to the USA, where he worked for magazines such as Vogue and Harper's Bazaar. Kertész was a major influence on Robert Capa and Henri Cartier-Bresson.

Paul Strand , Paul Strand (1890-1976) was one of the most important figures in American twentieth-century photography. His work is characterized by great richness… Imogen Cunningham , Imogen Cunningham (1883-1976) was an innovative American photographer. She was best known for her detailed, sharply focused photographs of plants as… Photography , Photography is the art and science of creating images using light . For most of its history, this has usually meant using silver compounds that darke… Richard Avedon , Avedon, Richard Avedon, Richard (b. 15 May 1923 in New York City; d. 1 October 2004 in San Antonio, Texas), prolific and innovative fashion and portr… Roy Decarava , DeCarava, Roy 1919– Photographer Roy DeCarava spent the better half of a century photographing life in Harlem. His rich, deeply evocative images—of l… Rosalba Carriera , Carriera, Rosalba CARRIERA, ROSALBA (1675–1757), Italian painter, known for miniatures on ivory. The eighteenth-century Venetian painter Rosalba Carr…