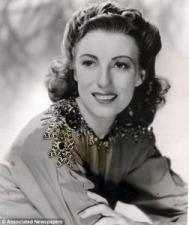 Vera Lynn was the most popular singer of World War II-era Britain, known during and after the war as the Forces' Sweetheart. The nickname was an apt one, for Lynn helped raise morale during the war effort by virtue of a down-to-earth quality that reminded servicemen of those they had left behind at home. Lynn had her own British Broadcasting Corporation (BBC) radio program, and her popularity was phenomenal. Welsh-born comedian and Goon Show star Harry Secombe was once quoted in London's Independent newspaper as saying, "Churchill didn't beat the Nazis. Vera sang them to death."

Lynn was born Vera Margaret Welch in the East Ham section of London's blue-collar East End on March 20, 1917. Lynn, her stage surname, was her grandmother's maiden name. Her father was a plumber, and her natural accent, only temporarily modified while she was a star, was Cockney. When she was seven, Lynn performed at an East End club, and she made singing and dancing a full-time occupation as soon as she could. At eleven she dropped out of school and began touring Britain year-round with a music hall variety show.

By 1933 Lynn had begun performing as a soloist. With a sweet voice, a hint of vulnerability, and an unusual un-starlike self-effacing quality, she quickly got the attention of the British public. "I was never a glamor girl. I was the girl next door," Lynn told Australia's Courier-Mail. She began to get jobs fronting top British society orchestras, genteel groups still barely touched by the spirit of jazz and Broadway song. In 1935 she made her radio debut with the Joe Loss orchestra, and two years later she landed a weekly slot on Life from Mayfair, an Ambrose Orchestra program beloved among Britons from the Prince of Wales on down.

It was no surprise when Lynn came out on top in a 1939 Daily Express poll where British servicemen were asked to name their favorite musical performers, even though Lynn later recalled that she was flabbergasted. She was dubbed the Forces' Sweetheart as a result. The bond British soldiers felt with Lynn grew stronger as World War II intensified and they were scattered across the globe. Lynn married musician Harry Lewis in 1941. The relationship got off to an unpromising start. "I don't think I thought much of him at first. He wooed me with chewing gum," Lynn told London's Guardian newspaper. But the marriage lasted 58 years, until Lewis's death in the late 1990s. For much of the singer's career, Lewis served as her manager.

In 1941 Lynn was given her own BBC radio show, Sincerely Yours. It was an instant success, not only in Britain but on every worldwide battleground the BBC reached via shortwave radio. Lynn performed the songs that became emblematic of World War II: "White Cliffs of Dover" and "We'll Meet Again." The latter became a wartime classic, of the sort that combines nostalgia with a looming sense of threat ("We'll meet again. Don't know where, don't know when … "). The latter song, introduced by Lynn with the Ambrose Orchestra in 1939, became the title track of one of three films she starred in during the war years. Sincerely Yours remained on the air until 1947.

In 1944, with the global war at its height, Lynn undertook a tour to entertain British troops in Egypt, India, and Burma. In later years she would express her amusement when Spice Girl Geri Halliwell demanded a refrigerator full of soymilk before performing for soldiers bound for Iraq. "She's lucky to be somewhere there is a fridge," she told the Guardian, recalling her stays in grass huts with a bucket of water for a shower. But the trip to distant Burma was worth it. "I remember one of the boys saying, 'Home can't be that far away, 'cause you're here,'" she told the Guardian. "It shortened the distance somehow."

Lynn's popularity easily survived the wartime years. After peace came, she and Lewis had a daughter, Virginia, but Lynn soon returned to performing. She toured all over the British Commonwealth and appeared in a Las Vegas cabaret and on radio in the United States as a guest on the Big Show program hosted by actress Tallulah Bankhead. She gave eight command performances for the British royal family, and her most successful single recording came, not during the war, but in 1951 with "Auf Wiederseh'n," a song ironically enough with a German theme. That recording brought Lynn to the top of the charts in the United States, making her the first English performer to reach that level. Telling the Courier-Mail that "I don't live in the past even though I have never been allowed to forget it," she experimented with newer pop styles and had some success in the 1970s with a cover of Abba's "Thank You for the Music." But audiences mostly wanted to hear her wartime classics.

Moving with her family to the small town of Ditchling in England's East Sussex region, Lynn threw herself into projects of various kinds. She led an activist group that tried to restrict heavy truck traffic in the historic area, and she was a reliable choice when it came to in-person and broadcast fundraising appeals. She remained especially interested in the problems of British war veterans, working in the 1990s for Tribute and Promise, an umbrella group of 130 charities working to aid the war generation. In 1992 she founded the Dame Vera Lynn School for Parents and Handicapped Children. Two years later, a plan to celebrate the fiftieth anniversary of the D-Day invasion of France with such frivolous events as a Spam-cooking competition was quickly scotched after she raised her voice in protest.

Lynn's numerous honors in later life included elevation to the Order of the British Empire in 1959 and to the rank of Dame of the British Empire in 1975, as well as such novelties as the Show Business Personality Award from the Grand Order of Water Rats. She took tea with the Queen and celebrated her 80th birthday at a reception with Princess Margaret, and she sponsored an organization of London taxi drivers who gave free rides to veterans. In 2000, six decades after becoming the Forces' Sweetheart, Lynn came out on top in another nationwide British poll: she was named the Briton who best exemplified the spirit of the twentieth century.

Lulu , Lulu Singer Sources Lulu is a prolific singer, performer, and actress whose career has spanned more than 30 years. In the United States she is most w… Jacqueline Du Pre , DuPré, Jacqueline Cello The career of young Jacqueline DuPré lasted a brief 12 years and during that time she graced the stages of the great concert… Vladimir Ashkenazy , Ashkenazy, Vladimir Pianist, conductor Russian émigré Vladimir Ashkenazy is one of the leading names in classical music. After achieving internationa… Bing Crosby , Crosby, Bing Singer, actor Bing Crosby was one of the most popular singing stars in the history of show business and one of the best-selling musician… Ute Lemper , Ute Lemper Singer, actress, dancer, performance artist European Stardom Danced into Ballet and Film Complete Artistic Expression Selected discography… Ida Haendel , Violinist Violinist Ida Haendel, born in 1928 in Poland, has been performing continuously since winning a concert competition at the age of seven. Re…