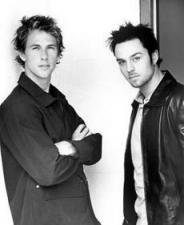 Australian musicians Darren Hayes and Daniel Jones teamed to form the pop duo Savage Garden in the mid 1990s. The two began collaborations in earnest in 1994 and proved their mettle within two years. The pair, having released a debut recording in 1996, had sold over 18 million records by 2000. Members of the Australian recording industry rushed to recognize the phenomenal success of Savage Garden by bestowing the duo with an impressive collection of awards in the late 1990s. Savage Garden meanwhile continued to shatter sales records into the 2000s.

Darren Hayes was born in 1972 to a working class family in Brisbane, Australia. The youngest of three siblings, he was the second son of a merchant seaman named Robert Hayes and his wife, Judy, a nurse. Hayes loved to sing, and he joined school choirs and appeared in stage productions. After graduating from Mabel Park High School in 1989, and much to his parents’ gratification, Hayes declined admission to a performance academy and opted instead to attend the University of Queensland. He was the only member of the family to attend college, although his university career was nonetheless short-lived. Hayes abandoned college after a single semester. In its stead, he elected to pursue a career in popular music as a vocalist and songwriter. After answering an ad in an Australian newspaper, Hayes joined the Brisbane group Red Edge in 1993, singing covers and performing frequently in small clubs and bars. During his tenure with the band, Hayes developed a close professional bond with the band’s leader, guitarist, and keyboard player Daniel Jones. A talented instrumentalist, Jones was born in Britain and raised in Brisbane. Like Hayes, Jones was an aspiring songwriter, and a friendship between the two musicians laid the groundwork for Savage Garden. “Our songwriting relationship is like the mutual admiration society. We are each other’s biggest fans,” Jones told Tom Lanham inTeen People.

In the early 1990s, the members of Red Edge dispersed slowly after failed negotiations for a recording contract. As the group splintered apart, Hayes and Jones emerged as a duo in 1994 and established a collaborative songwriting effort. The fledgling songwriters purchased the rights to call themselves Crush from another band which was already using the name. To their dismay, however, Hayes and Jones discovered soon after that a third band in Great Britain also went by the name Crush and was rising to prominence at the same time. The two collaborators reconsidered and adopted the name Savage Garden for their act. They coined the term from the works of novelist Anne Rice who used the phrase to describe the lair of the vampires in her novel The Vampire Lestat, Rice called the vampire haunts a “savage garden.”

Hayes and Jones then set a resolute course for their career; they devoted their time exclusively to writing songs. By 1996, they had completed several dozen

songs and successfully recorded a debut album featuring eleven original selections. After completing the debut recording, their manager-producer team of John Woodruff and Charles Fisher fine tuned the tapes, adding more background and polish to the work. Fisher, who recognized the hit potential of the Savage Garden sound, added instrumental accompaniment. Savage Garden’s self-titled album was released in Australia late in 1996; it appeared in the United States early in 1997.

Shortly after the release of the Australian debut album, American talk show host Rosie O’Donnell took a liking to a single release from that album called “I Want You.” O’Donnell previewed the tune daily on her television program for several weeks prior to the album’s American debut. “I Want You” and two other singles became best selling songs and helped to spur an international momentum for Savage Garden. Among the hit singles from the debut album, Hayes and Jones admitted that “Truly Madly Deeply” was a last minute choice for inclusion on the album. The two musicians admitted to reworking the entire song from its original arrangement just prior to recording the tune. Within seven weeks of its release as a single, the song soared to number one on the music charts. Likewise “I Want You,” the O’Donnell pick, peaked on the music charts at number one in Australia, Canada, and Singapore, and reached number eleven in the United Kingdom.

On September 22, 1997, Savage Garden received an unprecedented ten Australian Recording Industry Association (ARIA) awards, including an award for best engineering effort by Fisher. In addition to the award for album of the year, Savage Garden received awards for best group, best debut album, and best pop release. Two of the three single tracks released from the album were nominated in contention with each other for best independent single, and the hit track, “To the Moon and Back” received an award as the highest selling single release of the year.

In search of new inspiration, Hayes and his make-up artist spouse, Colby Taylor, relocated to New York City in 1997 following the success of the first Savage Garden album. Taylor and Hayes, who met in college, married in 1994; the pair separated in 1998 and were divorced in 1999. Hayes remained in New York where he wrote much of the Savage Garden follow-up album, Affirmation .Hayes also adopted a more prominent role as spokesperson for the pair and allowed his personal life to define the persona of Savage Garden. Jones stayed out of the spotlight and remained in Brisbane.

Hayes admitted that the emotional aftermath of his failed relationship with Taylor proved an integral source of inspiration for the material on the duo’s follow-up album, which was released in 1999. “Musically, lyrically, and performance-wise, we wanted this album to grow out of something natural,” Hayes told Billboard’s Chuck Taylor. “I was intent on making a record that could be a soundtrack not just to my life, but to everybody’s lives.” Affirmation co-producer Walter Afa-nasieff praised Hayes for his versatile vocal skills and noted to Lanhamthat Hayes, in fact, sang every lead and dub on every track. “Even the background harmonies—it’s all him.” By October of 2000, Affirmation had sold six million copies, driving Savage Garden’s total album sales beyond 17.5 million. The album, like its predecessor, contained solid single tracks that proved popular when released as singles. “I Knew I Loved You” became a number one hit and “Crash and Burn” also performed well on the music charts when it appeared as a single. Also, “I Knew I Loved You” was released as a popular music video starring Hayes and actress Kirsten Dunst. “People thought we were a one-hit wonder. Now, maybe we’ve proved them wrong,” Hayes told Steve Dougherty in People.

In 2000, following the success of Aftermath, Hayes moved westward to the San Francisco Bay Area. In the midst of fame, both Hayes and Jones retained an uncomplicated approach to life. They became advocates for children’s causes and made public appeals to their fans to support charities for children, such as the Starlight Children’s Foundation for children with serious illnesses.


In the late 1990s Australian duo Savage Garden had women of all ages swooning with their unabashedly romantic pop tunes, and, judging from the band's massive chart success, had a solid male following as well.

Daniel Jones and Darren Hayes met while Jones was auditioning singers for his cover band in Queensland, Australia. Suitably impressed with Hayes's performance, Jones left his band to pursue a recording contract with Hayes in tow. The new duo called themselves "Savage Garden," after novelist Anne Rice's description of a vampire lair. Savage Garden signed to the local label JDM and released its self-titled debut album in Australia in 1997. American radio stations soon after picked up the song "I Want You," and Columbia Records signed Savage Garden to a U.S. distribution deal.

With its breezy international feel and electronic-influenced dance sound, "I Want You" harks back to early 1990s chart-toppers Roxette and Ace of Base. The tune features a pulsing drum-machine backbeat as well as an appealingly romantic approach that is both seductive and well-reasoned: "Conversation has a time and a place in the interaction of a lover and a mate / But the time of talking, using symbols, using words can be likened to a deep sea diver who is swimming with a raincoat." Hayes's rapid-fire delivery of such lines, coupled with the simple and memorable chorus ("Oooh, I want you / I don't know if I need you / But, ooh, I'd die to find out"), made "I Want You" a major international hit and established Savage Garden as a force on the pop charts.

The follow-up single, "Truly Madly Deeply," outdid its predecessor, climbing all the way to number one on the Billboard singles chart. Sung in a high register by Hayes to a beat of a simple drum machine, "Truly Madly Deeply" honors romantic commitment: "I want to stand with you on a mountain / I want to bathe with you in the sea / I want to lay like this forever / Until the sky falls down on me." In addition to scoring on the mainstream pop charts, "Truly Madly Deeply" was a hit on adult contemporary radio. Savage Garden's mild electronic-tinged sound was sufficient to attract younger listeners, but not so dominant as to scare off adult audiences; fans of adult contemporary music came to make up much of Savage Garden's domestic audience.

Savage Garden enjoyed more chart success in its brief four-year recording career than most bands achieve over the course of a career. The band left in its wake not only a string of memorable pop hits but also an enduring mark on the adult contemporary market, which became more open to modern, electronic-influenced music.