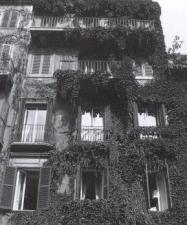 A biographer's nightmare, Giacinto Scelsi was a mysterious, reclusive, and elusive Italian aristocrat whose music has been described as otherwordly, miraculous, visionary, and life-altering. Refusing the title of "composer," Scelsi regarded himself as a medium through which music, originating in celestial spheres, appeared in the physical realm. Deeply spiritual, Scelsi immersed himself in the great traditions of Eastern and Western wisdom, always seeking a deeper understanding of the universe. He was not, however, a mystic who composed in order to convey certain insights to a wider audience; for him, writing music was a mystical act.

As a rule, even esoteric composers express their ideas through more or less traditional musical idioms. Despite his efforts to probe the mysteries of existence, the Russian composer Aleksandr Scriabin, for example, remained within the confines of Western tonality, even as he anticipated atonal music, which relinquished defined keys and the idea of a tonal center—a point of reference that the listener, regardless of his theoretical views about music, still instinctively craves. Rejecting the modern and avant garde quest for new musical forms and languages as superficial, Scelsi decided that, to access the cosmic source of all music, the composer must transcend all musical traditions and concentrate on the primal experience of sound.

The Search for the Hidden Dimension

According to Scelsi, sound—a form of cosmic energy—is a three-dimensional spherical phenomenon. While two dimensions, duration and quality (e.g. timbre) are easily perceived, the third dimension remains hidden within the sphere. What enabled Scelsi to discover this inner dimension were fine, barely perceptible microtonal pitch fluctuations that revealed entire worlds behind the illusion of a monolithic tone. Scelsi noted the profound artistic importance of overtone series, which the German scientist Heinrich Helmholtz analyzed in his writings about acoustics.

As Roger Scruton explained, musical pitch depends on the frequency of the vibration that creates it. Helmholtz observed, however, that when an object vibrates, it sets up subsidiary vibrations that are natural number multiples of the root frequency: 2, 3, 4, 5, 6, etc. The overtone series extends, theoretically, into infinity, suggesting the astonishing idea that every tone is infinte and inexhaustible. Scelsi's intuition that particular acoustical properties of tones opened new creative horizons inspired a group of younger artists, known as known as composers of "spectral music," who used computer technology to further explore the nature of tones. However, musicologists do not define Scelsi's music as spectral, since he eschewed any particular approach, preferring, instead, to experience tones as audible manifestation of a mysterious universe.

The last Count of Ayala Valva, Scelsi was born in a castle in 1905 in southern Italy. He discovered the piano at the age of three. As an aristocrat, Scelsi was spared the trials of public education, studying music and the humanities with the best teachers in Italy. In addition, his talent, intelligence, disarming eccentricity, and social status enabled him to move freely among Italy's artistic and intellectual elite. After studying music in Rome, he went to Vienna in the 1930s, to study with Walter Klein, who introduced him to 12-tone music. Also known as serial music, this is a compositional technique invented by Arnold Schoenberg that derived a composition's entire melodic and harmonic structure from a predetermined pattern using all 12 tones of the chromatic scale.

Moving from one European capital from another, Scelsi encountered artists and writers, developed important friendships (particularly with the painter/poet, Henri Michaux and artist Salvador Dali), composed music, and keenly followed the trajectories of surrealism and other artistic movements. Fascinated by oriental mysticism, he also traveled in India and Tibet, returning to Lausanne, Switzerland, in the late 1930s, where he took refuge during World War II. After the war, Scelsi's wife, Dorothy, an English aristocrat related to the royal family, left him; Scelsi never heard from her again. He fell into a state of profound, debilitating despair, which, according to many stories, Swiss doctors were incapable of alleviating. Apparently, Scelsi cured himself by sitting at the piano for hours and playing one note in myriad ways.

A work symbolizing Scelsi's triumph over despair was La nascita del Verbo (The birth of the Word) for choir and orchestra, composed in the late 1940s. Performed in Paris in 1950, this composition established Scelsi as an original force in European music.

Settling in Rome in the early 1950s, Scelsi translated his meditations on the nature of tones into a series of extraordinary compositions, exemplified by Four Pieces Each on a Single Note for chamber orchestra. During the 1960s Scelsi continued to explore the resources of various musical instruments and experimented with the expressive potential of the human voice. While all his works represent important facets of his genius, the greatest achievement, according to critics, was his astonishing String Quartet No. 4, in which subtle tonal variations, combined with the mysterious power of small intervals, take the listener into unexpected dimensions of reality.

In the early 1970s, Scelsi became blind: the man who did not like to be seen (no one was allowed to photograph him) could not see any more. Later in the decade, he stopped composing. After his castle was destroyed in a 1980 earthquake, Scelsi spent his final years in Rome leading a reclusive life. He died in 1988.

After his death, younger composers began seriously studying his music, looking for ideas and insights. Performers, who particularly appreciated his efforts to enlarge the sonic range of traditional instruments, worked assiduously to bring the master's music to wider audiences. In curious twist, however, after Scelsi's death his close collaborator Vieri Tosatti made the outlandish claim that he was the real composer of Scelsi's music. While no one denies Tosatti's role as a scribe, experts have rejected his "revelation." It was Scelsi, and no one else, who composed, often sitting at the piano in a profound meditative trance, music that, to many listeners, evokes worlds beyond the imagination. Scelsi's music, wrote Arved Ashby in American Record Guide, "is indescribable: microtonal, arrhytmic, elemental, mysterious, slow-moving, not of our world. Nongrammatical. Visceral. A closed book. It follows no system and defined no audience."

Suite No. 8: "Bot-Ba"—Evocation of Tibet with Its Monasteries of High Mountains Summits, Tibetan Rituals, Prayers, and Dances, for piano, 1952

Quattro Illustrazioni: Four Illustrations on the Metamorphoses of Vishnu, for piano, 1953.

Suite No. 9: "Ttai" —A Succession of Episodes Which Express Time, or More Precisely, Time in Motion and Man as Symbolized by Cathedrals or Monasteries, with the Sound of the Sacred Om, for piano, 1953.

I presagi (Forebodings), for ten instruments, brass, and percussion, 1958.

Hurqualia: A Different Realm, for orchestra with amplified instruments, 1960.

Aion: Four Episodes in One Day of Brahma, for orchestra, 1961.

Anahit (Lyrical poem on the name of Venus), for violin and 18 instruments, 1965.

Uaxuctum: The Legend of the Maya City which Destroyed Itself for Religious Reasons, for vocal soloists, ondes Martenot, chorus, and orchestra, 1966.

Konx-Om-Pax: Three Aspects of Sounds—As the First Motion of the Immovable, as Creative Force, as the Syllable "Om," for chorus and orchestra, 1969.

George Rochberg , Rochberg, George Rochberg, George Composer In the 1960s, classical composers in the United States and Europe were in the grip of a system known as se… Aaron Copland , Copland, Aaron Composer “To a composer, music is a kind of language,” I Aaron Copland opens the first volume of his autobiography, Copland: 1900 Thro… Henryk Gorecki , HENRYK MIKOŁAJ GÓRECKI Born: Czernica, Poland, 6 December 1933 Genre: Classical It is tempting to classify the composer Henryk Mikołaj Górecki as a o… John Kenneth Tavener , Tavener, John John Tavener Composer At first glance, John Tavener is something of a paradox: a profoundly religious, deeply spiritual composer who en… Heinrich Ignaz Franz Von Biber , Von Biber, Heinrich Ignaz Franz Composer Heinrich Ignaz Franz von Biber (1644–1704) wrote some of the most imaginative music of the Baroque era in Ge… Henk Badings , Henk Badings Henk Badings A prolific composer of more than 600 works, Henk Badings (1907-1987) is one of the best known figures in twentieth-century…