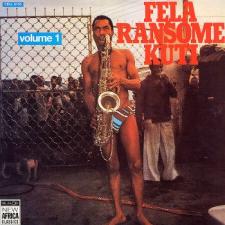 One of Africa’s most acclaimed musicians, Nigerian Fela Anikulapo Kuti is “a peculiar late-twentieth-century mix of shaman, politician, ombudsman, activist and musical genius,” according to Gene Santoro in the Nation. Kuti, or Fela, as he is popularly called, writes and performs political protest songs that have won him a large following both at home and abroad, to the frequent chagrin of government authorities. His music—dubbed “Afro-Beat”—is an amalgam of American blues and jazz blended with African rhythms, while his pointed lyrics—in pidgin English and African—confront government corruption, multi-national corporations, and police brutality. Larry Birnbaum in Spin described the Fela sound as “chicken-scratch guitar, vamping organ, massed brass, female chorus, jazzy horn solos, layered drumming—and antiestablishment doggerel,” calling it “hypnotically persuasive” and commenting that “Fela’s insinuating baritone is a potent preacher’s tool.” In a career that has spanned four decades Fela has recorded over 50 albums and performs frequently in concert.

Fela is a flamboyant singer and musician and his concerts—many held at his Lagos nightclub, The Shrine—are lengthy and infectious. Fela belts out his driving songs, gyrating as he performs on saxophone or keyboards, directing his thunderous 27-member band, Egypt 80. “[His] songs, which usually ride sloganlike lyrics over a densely woven web of cross-rhythms, have titles like ‘Beasts of No Nation’ (which deals with the way various governments abet South African repression) and ‘Just Like That’ (a sneeringly witty list of Nigeria’s current shortcomings),” noted Santoro. John Darnton wrote in the New York Times that one of Fela’s most popular songs, “Upside Down,” describes a traveler who finds an organized, well-planned world everywhere except in Africa, where there are villages, but no roads, land, but no food or housing. “These things are the daily lot of all Lagosians,” Darnton noted. “When Fela sings this song, … listeners nod their heads solemnly and look into their beers.”

Fela’s musical upbringing spanned three continents. Born and raised in Nigeria, he initially studied piano and percussion and, as a youth, led a school choir. In the late 1950s Fela moved to London—to study medicine, thought his middle-class parents—where he explored classical music and was exposed to American jazz artists Charlie Parker, John Coltrane, and Miles Davis. His music did not become political, however, until the late 1960s, when he visited the United States and was exposed to the black power movement. Influenced by the teachings of black activist leader

Malcolm X, Fela began to realize the implications for Africa of white oppression, colonialism, Pan-Africanism—the unity of African nations—and revolution. His newfound political consciousness inspired him to adopt the middle name Anikulapo—“having control over death”—and change his band’s name from Koola Lobitos to Afrika 70 (later Egypt 80). The young musician’s work would never be the same; as quoted by Jon Pareles in the New York Times, Fela said, “The whole concept of my life changed in a political direction.”

Fela returned to Nigeria and began to write politically charged songs that rocked his country. Inspired by Pan-Africanism, he incorporated African instruments into his band, including Konga drums, klips sticks, and the sekere, a percussion instrument. “I’m playing deep African music,” he said at the time, as Pareles noted. “The rhythm, the sounds, the tonality, the chord sequences, the individual effect of each instrument and each section of the band—I’m talking about a whole continent in my music.” Fela’s protest music became very popular among the ranks of Nigeria’s unemployed, oppressed, and politically dissident. These groups remain a large part of his audience.

Fela’s music and politics have made him a cult figure in Nigeria; he has run for the presidency twice. His openly confrontational messages have, however, repeatedly irked government authorities, who have found reason to jail Fela for a variety of offenses throughout his career. In 1977 official rancor turned violent when the Nigerian military—some say in response to Fela’s album Zombie —leveled his imposing Lagos residence after Fela had declared it an independent republic. Before burning down the house—including Fela’s recording equipment and master tapes—soldiers went on a rampage in which Fela’s 82-year-old mother, a prominent women’s rights activist, was hurled from a second-story window. She later died from her injuries and her son, in protest, dumped her coffin at the house of then-president General Olusegun Obasanjo.

Although such incidents have rallied support for Fela, he is notorious for a lifestyle that has alienated many Nigerians; he unabashedly preaches the virtues of sex, polygamy, and drugs, in particular the use of marijuana as a creative stimulant. In 1978 Fela shocked his countrymen when he married his harem of 27 women (whom he later divorced), in protest he said, against the Westernization of African culture. His commune, the Kalakuta Republic—established to protest the military rule of Nigeria—was reportedly itself run like a dictatorship. According to the Times’s Damton: “[Fela] ruled over the Kalakuta Republic with an iron hand, settling disputes by holding court and meting out sentences—cane lashings for men and a tin shed ‘jail’ for women in the backyard.… To some degree, these trappings of power account for his popularity among authority-conscious Nigerians.” Spin’s Larry Bimbaum elaborated on Fela’s excesses, reporting, “Stories abound of his setting fire to hotel rooms, … firing penniless band members on overseas gigs, making interviewers cool their heels for days and then receiving them in his underwear.…”

While Fela’s politics and lifestyle are controversial, few quibble over the power of his music. In 1986—after the human rights organization Amnesty International helped free him from prison, where he had languished due to questionable currency-smuggling charges—Fela and Egypt 80 made their first tour of the United States, where their audience is limited but growing. He has influenced the work of reggae singer Jimmy Cliff and the Talking Heads’ David Byrne. In 1991 he performed an epic gig at New York City’s Apollo theater accompanied by 30 support players.

As Fela becomes better known outside Nigeria he feels that his music will increasingly hold an international message. He told People’s Cathy Nolan: “America needs to hear some good sounds from Africa, man. The sanity of the world is going to be generated from Africa through art. Art itself is knowledge of the spiritual world. Art is information from higher forces, by those who are talented. I’m not jiving. I’ve been living with my art for 23 years. My music has never been a failure.”

Beasts of No Nation, Shanachie.

Coffin for the Head of State.

(With Roy Ayers) Music of Many Colours, Celluloid.

(With Lester Bowie) No Agreement, Celluloid.

(With wife, Sandra) Upside Down, Celluloid.

oxford
views updated
Kuti, Fela ( Anikulapo) (1938–97) Nigerian singer-songwriter and saxophonist. Known for protesting against oppression and respected for his intricate Afro-beat music, his albums include Coffin for Head of State (1978) and Underground System (1992).

Oumou Sangare , Sangare, Oumou Malian singer, songwriter Oumou Sangare is the voice of feminism in West Africa. In a region where polygamy is the norm, and women are… Manu Dibango , Dibango, Manu Saxophonist The most widely known musician from the French West African nation of Cameroon, Manu Dibango was one of the pioneers of wor… Lester Bowie , Lester Bowie Trumpeter, fluegelhornist For The Record… Selected discography Sources Lester Bowie was a rarity in jazz. As a charter member of the Art… David Byrne , Byrne, David Singer, songwriter, composer, filmmaker More than almost any other popular musician, the multitalented David Byrne is at home in many wo… Tracy Chapman , Chapman, Tracy Singer, songwriter, guitarist In an era when the label folksinger-songwriter does little to guarantee success, Tracy Chapman has seen… Brian Eno , Brian Eno Composer, producer, keyboardist, singer Joined Roxy Music Convalescence Spawned Ambient Music Bush of Ghosts Presaged Worldbeat Craze Fruit…