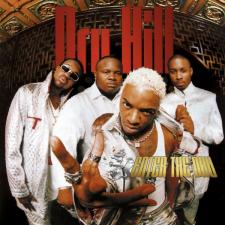 Natives of Baltimore, Maryland, the four members of Dru Hill have combined their smooth, R&B vocal stylings with the intention of putting “Baltimore on the map.” Unlike many of their contemporaries, the group relay a positive message, focusing their lyrics on life and love, rather than the harsh street grit of most hip-hop and rap. This, combined with their four-part vocal harmonies, have led to a hugely successful first single, “Tell Me,” and their first debut album, Dru Hill. With several hit singles following, a series of tours, and a hit follow-up album Enter the Dru, released in 1998, they have established themselves as leading musical artists in R&B and hip-hop, as well as a crossover success in the mainstream. They have indeed put their hometown on the map.

of their gospel-influenced harmonizing. All Baltimore natives, they named themselves after Druid Hill Park, what they affectionately refer to as “the spot.” Soon they were gaining popularity and entering competitions and talent contests. They won first place twice in the local Apollo Theater’s Amateur Night, and went on to place third at the Apollo Theater’s National Competition in New York.

Building on their first taste of stardom in 1995, they performed at a pool party for Black Entertainment Television’s “Rap City.” Island Black Music President Hiriam Hicks saw their show and arranged a meeting with them. The timing was right, and Dru Hill was in the studio later that afternoon, recording the song “Tell Me” for the Eddie soundtrack, which was in mid-production at the time. “Tell Me” became the group’s first hit single, peaking at number five on the Billboard’s Hot R&B Singles chart, drawing national acclaim for the quartet, and becoming the biggest hit on the soundtrack. Dru Hill’s debut album, Dru Hill, debuted in 1996, peaking at number five on Billboards Top R&B Albums chart and at number 23 on the Billboard200, and selling more than 1.5 million copies.

But none of their success could have been possible without the group’s varied talents and interests. Jazz, as his name suggests, is a jazz fan. With a passion for the blues and his roots in the church, his music has the heart of gospel and the edge of improvisation. He fills the role of Dru Hill’s second tenor vocals, as well as contributing keyboards, trumpet and piano to the mix. Sisqo spent most of his childhood in the church singing gospel, but has since developed a love for popular music. His appreciation ranges from classical to hip-hop, but he admits to always being a fan of what’s hip. He sings lead vocals for the group, plays keyboards and bass, and assists in arrangement and production. Nokio, an acronym for Nasty On Key In Octave, has his heart in production and the business side of music, feeling most at home in the studio. He is Dru Hill’s baritone, singing lyrics he himself often writes and sometimes accompanies with classical trumpet, keyboard and piano. Woody is the melody-maker and the spirited father figure of the group. His roots are also in gospel, as evidenced by his soulful lyrics. He, like the rest, is not just a singer, but also a drummer and keyboardist.

Contributing to the success of their first multiplatinum effort, Dru Hill released hit singles off the album, “In My Bed” and “Never Make a Promise,” both of which reached number one on the Billboards Hot R&B Singles chart. “We’re Not Making Love No More,” written by singer Babyface, reached number two. By the time they were ready to release a second LP, Dru Hill had established a substantial and loyal fan base.

But since it had been some time since their first full-length release, Island Records released their single “How Deep Is Your Love,” from the “Rush Hour” soundtrack on Def Jam Records in September of 1998. Follow-up album Enter the Dru was released the following month, a testament to the slight image and style changes made by the group. “We owe it to our fans to give them something different,” said Andrews in an interview with Billboard magazine for their October 3, 1998 issue. “I watch Michael and Janet [Jackson] and how they alter their images slightly [each time they have a new album]. When we perform, we never do the same show twice.” The album features songs written by each member of the group, as well as co-production credit to Andrews and Ruffin.

The first single off the album, “These Are The Times,” continued to garner fans for the now nationally famous quartet. Despite the huge number of new groups, Dru Hill has risen above as something unique. According to Angela Thomas, senior VP of Island Black Music, in an interview with Billboard magazine in the October 3, 1998 issue, “Dru Hill set the standard … This group has original songs with no sampling,” an important distinction between the group and their contemporaries.

Supplementing their success in the recording studio with live appearances, Dru Hill toured with Mary J. Blige, joined Puff Daddy’s “No Way Out” Tour, performed for the pay-per-view special “Breaking Out-The Concert” and opened up for Boyz II Men on their tour. But the quartet was brought down to a trio when Woody decided to leave in March of 1999 to pursue a solo career in gospel. The band mates remained on amicable terms. “He’s always been the one that pulled us together [with] the prayer, you know,” Nokio told MTV News in an article on March 19, 1999. “[He] prayed for everybody when we had hard times. And I don’t know, it’s just that when you get a calling like that, you just got to go with it.” The remaining Dru Hill members headlined their own tour of North America for the first time in the spring of 1999. As their sophomore effort continues to make its way up the charts, the only sentiment that comes to mind is that “These Are The Times” indeed.


Following the template set at the beginning of the 1990s by vocal quartets such as Jodeci and Boyz II Men, Dru Hill became one of the most successful R&B acts of the late 1990s. Although their gospel-influenced harmonizing over hip-hop beats added little innovation to the sound of their predecessors, they exhibited solid talent as singers, songwriters, and instrumentalists. Their skills attracted the industry's top producers and led to an impressive run of number one R&B hits and solo success for lead vocalist, Sisqó.

The four founding members of Dru Hill (Nokio, Jazz, Sisqó, and Woody) met while still in high school in Baltimore, Maryland. In 1992, after a summer spent entertaining tourists with impromptu performances while working at a fudge shop in Baltimore's Inner Harbor, they formed Dru Hill. Their name was inspired by Baltimore's historic Druid Hill Park. Victories at local talent shows earned them a manager, who in 1996 scored them an audience with the Island Records executive Hiriam Hicks. Hicks needed a group to record the song "Tell Me" for the soundtrack to the 1996 movie Eddie. Not only did Dru Hill get the job, but the song became a top-five R&B hit, and they released their self-titled debut later that year.

Dru Hill was executive-produced by Keith Sweat, one of the pioneers of New Jack Swing, the late-1980s movement that brought rap rhythms and an edgier, more "street" sound to R&B. The album grounds itself firmly in this tradition, offering a collection of mid-tempo R&B songs that showcase aggressively soulful lead vocals backed by the group's tight harmonizing. "Never Make a Promise" makes sentimental declarations of love, whereas "Tell Me" (re-released on this album) approaches "bedroom ballad" territory. Dru Hill also highlights the band's studio and songwriting skills, giving them co-writing and co-producing credits on a number of tracks. Dru Hill spawned a string of number one R&B singles and sold more than 1 million copies.

Extensive touring, including a performance at South African president Nelson Mandela's eightieth birthday party, allowed Dru Hill to prove their skills as showmen and instrumentalists while expanding their fan base. Their 1998 sophomore album, Enter the Dru, debuted at number two on the Billboard album chart and yielded the hits "How Deep Is Your Love" and "These Are the Times," the latter featuring Sisqó delivering the infamous couplet: "Tear you up in little pieces / Swallow you like Reese's Pieces." The album eventually went double platinum.

By this time Sisqó had emerged as the de facto front-man of the group. He sang lead vocals on the majority of Dru Hill's hits, and his platinum blonde-dyed hair, extensive tattoos, and flamboyant clothes further distinguished him from his band mates. In November 1999 he released a solo album, Unleash the Dragon. The first single, "Got to Get It," charted respectably, but it was the second single that turned Sisqó into a bona fide superstar. A bombastic, jittery tribute to skimpy beachwear, "The Thong Song" hit the Top 10 pop charts and was proclaimed "the official anthem of Spring Break 2000" by MTV. That summer Sisqó toured with *NSYNC, then at the peak of their popularity. That fall "The Thong Song" won Best Hip-Hop video at the MTV Video Music Awards. Unleash the Dragon went quadruple platinum. "The Thong Song" proved to be the apex of Sisqó's solo career, and in 2002 he reteamed with Dru Hill (including a new member, Scola) to release the group's long-awaited third album, Dru World Order.

Although scarcely innovators, Dru Hill expertly applied their considerable vocal and songwriting talents to the standard hip-hop-laced R&B of the time. Their succession of hit singles and albums helped push hip-hop toward the mainstream and contributed to its emergence as a major commercial force in the 1990s.