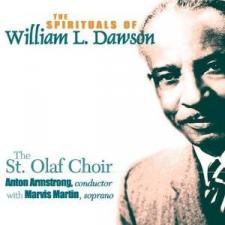 “No one has made a stronger contribution to the presentation and understanding of the Afro-American folk song” than William Levi Dawson, according to historian John Lov-ell in his comprehensive study of the African-American spiritual, Black Song: The Forge and the Flame. As one of the founders of African-American classical composition in the United States and as a leader of the Tuskegee Institute Choir for 25 years, Dawson arranged spirituals, composed new religious music in an African-American folk idiom, and created larger classical compositions that showcased black folk idioms. Those Americans who have sung arrangements of spirituals in school or church choirs have likely encountered Dawson’s work or that of one of the many students he influenced.

William Levi Dawson was born in Anniston, Alabama, on September 26, 1899, as the youngest of seven children. He loved music as a child, and admired the work of a local jazz band called the Gresham Band, which rehearsed in an Anniston grocery store. Upon discovering that the band’s leader was a graduate of the Tuskegee Institute, Dawson sold his bicycle for six dollars and headed for Tuskegee himself. He was 13 years old.

The underage, small-town boy felt out of place at the pioneering institution of African-American higher education. “I was so far behind when I arrived at Tuskegee that I had to pay someone to tutor me in reading and writing,” Dawson told the St. Petersburg Times. “They put me in the band and the band had a special table in the dining hall. I was a mess. All those pretty girls. I was so bashful I nearly starved myself to death rather than eat.” But the school’s charismatic founder, Booker T. Washington, took Dawson under his wing and saw to it that he found a job working for the school’s agriculture department and later at its music library.

Dawson’s aptitude for music showed itself while he was at Tuskegee. He learned to play the trombone and the euphonium, sang in the school’s choir and in a special small ensemble, the Tuskegee Singers, and took piano and harmony classes. Dawson graduated from Tuskegee with top honors in 1921. He went on to earn a bachelor of music degree with honors from the Horner Institute of Fine Arts in Kansas City, Missouri, in 1925. He paid his bills by teaching at Kansas Vocational

College and supervising the music program for the all-black schools in Kansas City’s segregated school system. The Horner Institute, a white institution, was officially segregated as well. Several professors disregarded the rules in order to admit the obviously gifted Dawson to their classes, but he was not allowed to take the stage at graduation, even though a piece he had composed for the occasion had received warm applause when it was performed by a group of local white classical musicians.

Moving on to Chicago, Dawson accepted a position as principal trombonist with the Chicago Civic Orchestra in 1926. He took composition classes at the Chicago Musical College and earned a master’s degree in music the following year from the city’s American Conservatory of Music. He then moved on for yet more study at the Eastman School of Music in Rochester, New York. After winning several performance and composition prizes, Dawson was invited back to Tuskegee to direct the Tuskegee Institute Choir and to start a new school of music at the Institute. He would remain there until his retirement in 1955, at which time he received an honorary doctoral degree from the Institute. Dawson married twice; his first marriage, in 1927, ended with his wife’s death the following year, but his second, to the former Cecile DeMae Nicholson, lasted for the rest of his life.

Under Dawson’s leadership the 100-voice Tuskegee Choir became known far and wide. The choir toured major Northeastern venues such as Carnegie Hall in New York City and Washington’s Constitution Hall in the early 1930s, singing spirituals and other music a cappella (unaccompanied), often using Dawson’s own arrangements. Over the 1932-33 holiday season, they appeared for a month-long engagement as part of the opening ceremonies for New York’s new Radio City Music Hall, generating such enthusiasm among concertgoers that President Herbert Hoover and President-elect Franklin Roosevelt both arranged to have the choir perform for their families. In 1934 the choir, under the auspices of the U.S. State Department, made an international goodwill tour to England, continental Europe, and Russia.

Another triumph for Dawson was the 1934 premiere of his Negro Folk Symphony by the musicians of the Philadelphia Orchestra and their flamboyant conductor, Leopold Stokowski. Dawson had written the work in 1931, and a New York financier who was impressed by the Tuskegee Choir performances found out about the work and sent it Stokowski’s way. The work was the first symphony by an African-American composer to be premiered by a major American orchestra, and it was widely performed in subsequent years. In three movements, the work used a musical language influenced by the spirituals, but it was also infused with more modern elements. Stokowski, according to the New York Times, described the piece as “the ancient voice of Africa transferred to America.”

Dawson’s arrangements of spirituals are today considered to be classics of the genre. Dawson himself preferred the term “Negro folk songs,” arguing that the songs that had come down from slavery reflected many aspects of life beyond the purely religious. As his career at Tuskegee progressed, Dawson found himself more and more in demand as a guest conductor, choral workshop leader, music education conference panelist, and lecturer.

One of the highlights of Dawson’s later career was a 1940 commission from the CBS radio network for a orchestral composition, to be broadcast as part of the network’s American School of the Air series, featuring works by American composers. Dawson’s contribution, A Negro Work Song, became one of his most widely performed classical pieces. The Tuskegee Choir appeared on television’s Ed Sullivan Show and on top radio programs in the early 1950s, and the indefatigable Dawson continued his own lifelong education by traveling to Africa in 1952 and 1953 to study the country’s traditional music.

After his retirement in 1955, Dawson conducted the Fisk University Choir for a year. He traveled to Europe on another State Department tour, this time conducting choral groups in Spain. Although retired from his academic career, he barely slowed down in making his national rounds of choral festivals, high school and college choir workshops, and conducting classical orchestral and choral concerts. He made guest conducting appearances with the Kansas City and Nashville Symphony Orchestras in 1966 and with the Baltimore Symphony in 1975, and late in life was presented with a plethora of honorary degrees. On the occasion of his 90th birthday, he led a special reunion performance of the Tuskegee Choir. Dawson died in Tuskegee on May 2, 1990.

African American composer, performer, and music educator William Levi Dawson (1899-1990) used the rich vitality of his musical heritage as a basis for all types of music, including arrangements of folk songs and original compositions.

William Levi Dawson was born on September 26, 1899, in Anniston, Ala. At the age of 13 he entered Tuskegee Institute and graduated in 1921 with first honors. He received the bachelor of music degree from the Horner Institute of Fine Arts in Kansas City, Mo., in 1925. He studied composition under Felix Borowski at the Chicago Musical College and under Adolph Weidig at the American Conservatory of Music. In 1927 he received the master of music degree from the American Conservatory of Music in Chicago.

Dawson's membership in the band and orchestra at Tuskegee had been excellent professional preparation for serving as first trombonist with the Chicago Civic Orchestra from 1926 to 1930. In 1929 he won the Chicago Daily News contest for band directors, and in 1930 Wanamaker Contest prizes for the song "Jump Back, Honey, Jump Back" and the orchestral composition "Scherzo."

In 1931 Dawson became director of the School of Music at Tuskegee. From 1932 to 1933 Dawson conducted the institute's 100-voice a cappella choir in a month's engagement at the opening of the International Music Hall of Radio City, and in concerts at Carnegie Hall, New York City, the White House, and another at Constitution Hall, both Washington, D.C., and in a series of national and international broadcasts. In 1934, under the sponsorship of the President of the United States and the State Department, the Tuskegee Choir made a concert tour of international and interracial good will to the British Isles, Europe, and the former U.S.S.R. Leading critics in America and abroad praised the choir highly.

Dawson had wide experience as a director and consultant to festival groups. In 1956 Tuskegee Institute conferred upon him the honorary degree of doctor of music and he was sent by the U.S. State Department to conduct various choral groups in Spain.

Although Dawson's choral arrangements were popular, he was best known for his Negro Folk Symphony, which had its world premiere by the Philadelphia Symphony Orchestra under Leopold Stokowski (1934). In this work the composer used melodic and rhythmic language borrowed from Negro spirituals, along with original material in the same idiom. The symphony was imaginative, dramatic, and colorfully orchestrated.

In 1952 Dawson visited seven countries in West Africa to study indigenous African music. He later revised the Negro Folk Symphony, infusing it with a rhythmic foundation inspired by African influences.

Morton Gould , Gould, Morton Composer, conductor Despite receiving no formal education in orchestra tion or conducting, Morton Gould became one of the most prominen… William Schuman , Schuman, William Composer, educator, administrator William Schuman had an ordinary childhood in New York City, with little to suggest that he would b… Undine Smith Moore , Moore, Undine Smith 1904–1989 Classical composer, educator As an African American musical pioneer in the university setting, Undine Smith Moore inspi… Musicology , Musicology is the scholarly study of music, where music can be considered either as a fixed object of investigation or as a process whose participant… Nathaniel R. Dett , Robert Nathaniel Dett African American composer, conductor, and music educator Robert Nathaniel Dett (1882-1943) elevated the African American folk s… George Walker , Walker, George Composer, pianist An accomplished and prolific classical music composer, George Walker has achieved many “firsts” in his career, mostl…