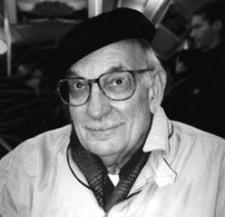 The American composer and teacher George Crumb (born 1929) developed an immediately recognizable style based on the coloristic potential of instruments and voices, evoking mystery, sensuality, and great spatial dimension.

George Crumb was born in Charleston, West Virginia, on October 24, 1929. He began writing music shortly after his tenth year, motivated by his father, who was a clarinetist and bandleader, and by the popular and religious music of his native Appalachia. The latter, especially, remained an influence in his mature compositions. His mother was also a cellist, so Crumb's childhood was saturated with musical inspiration, such that by nine years old he already played piano by ear. He earned degrees from Mason College, Charleston, (B.M., 1950); the University of Illinois (M.M., 1952); and the University of Michigan (D.M.A., 1959), where he studied with Ross Lee Finney. Crumb also studied with Boris Blacher at the Berkshire Music Center and at the Berlin Hochschule für Musik (1955-1956). An appointment at the University of Colorado (1959-1965) and a position as creative associate at the Center of Creative and Performing Arts in Buffalo (1964-1965), preceded his longtime post at the University of Pennsylvania.

An extremely well-integrated eclecticism characterizes Crumb's mature works after the early 1960s. Although Crumb listed Debussy, Mahler, and Bartók as being his principal musical influences, the works themselves suggest far broader origins. The conciseness and attention to detail are reminiscent of Webern, and the delicacy of the line derives from Eastern music. Crumb utilized the vocabulary of extended vocal and instrumental techniques common to many 20th-century composers and expanded them considerably. Some of the more arresting effects are achieved in the following ways: striking a gong while lifting it in and out of a bucket of water (called the water gong); playing the violin and other stringed instruments "bottle-neck style" (that is, with a glass rod or tube on the fingerboard); playing directly on the piano strings, often with thimble-capped fingers; and dropping a light metal chain on the piano strings so that the strings, when sounded, will vibrate against it. The singer, too, was asked to produce non-traditional sounds and phonetical vocalizations, sometimes based on parts of a text, and often requiring great virtuosity.

For the most part, Crumb's sounds were produced acoustically, though with use of amplification to increase timbrel variation and to refine dynamic gradation. This coloristic basis also allowed the easy assimilation of folk, popular, and non-traditional instruments into his palette. These include banjo, mouth harp, harmonica, electric guitar, water glasses, and Tibetan prayer stones.

Almost all of Crumb's vocal music, comprising a large part of his total output, was based on the poetry of Federico García-Lorca, for whom the composer had a truly rare affinity. Regarding Ancient Voices of Children for soprano, boy soprano, and instruments (1970), Crumb wrote, "I have sought musical images that enhance and reinforce the powerful, yet strangely haunting, imagery of Lorca's poetry." The resonance of his timbrel effects and prolonged durations and slow harmonic rhythm combine to create a physical sense of vastness and helplessness that is very much akin to the spirit of Lorca's verse.

Quotation is another device occurring frequently in Crumb's compositions. He writes, also in regard to Ancient Voices of Children, "I was intrigued by the idea of juxtaposing the seemingly incongruous: a suggestion of flamenco with a baroque quotation, or a reminiscence of Mahler with a breath of the Orient." Again, the result was not simple collage; the quotations, though recognizable, were integrated into a total effect that was at once surreal and yet musically logical.

Crumb's music was largely freely ordered and non-tonal. Microtones, though used, did not have structural significance, as when the double strings of the mandolin are tuned one-fourth tone (the notes between adjacent keys of the piano) apart in Ancient Voices of Children to add pungency to the sound. Abstract forms did not play an important part in organizing even those works not built on the framework of a text. Frequently his forms were palindromic (they read the same forwards as backwards, such as ABCBA), and overall structure that is supported by sections written in "circular notation" (whereby the staff is in the shape of a circle). Where devices such as isorhythm (having a repeated scheme of time values) did appear, they usually reinforced a text—a throwback to Renaissance word-painting.

Visual aspects were also important to Crumb's music, evident both in the fine calligraphy of his scores and in the directions to performers, which often required the wearing of masks, as in Lux Aeterna for soprano, bass flute, recorder, sitar, and percussion (1970) and Vox Balanae for electric flute, electric piano, and electric cello (1971), or required processions and pose striking, as in Echoes of Time and the River for orchestra (1967). Off-stage placement of instrumentalists or singers enhanced both visual and acoustical-spatial dimensions previously described.

Because of the greater emphasis placed on pure musical imagination rather than on structural artifice, Crumb's music sounds more improvisatory than it actually is. Chance operations, when specified, permit choice of time and order of entry, but the notes themselves are fixed. The original version of Night Music I for soprano, celesta, piano, and percussion (1963) specified areas for improvisation, but for the 1979 recording Crumb wrote the passages out in full with the explanation that improvisation "rarely attains a consistent degree of stylistic congruity."

Some of Crumb's later works included Star-Child for soprano, antiphonal children's voices, male speaking choir, bell ringers, and large orchestra (1977); Apparitions for soprano and amplified piano (1979); and The Sleeper for soprano and piano (1984). In this later period, Crumb composed some of his most elaborate pieces. Star-Child, for instance, has such an involved score that it requires four conductors to lead the eight percussionists, who perform on over 70 different instruments, ranging from pot lids, iron chains, and wind machines to other more traditional percussive instruments. But Crumb's later period wasn't limited to complex pieces; he also composed spare choruses, such as Apparitions, which was his first strictly vocal composition in over ten years.

Though he was one of the most celebrated American composers of the 1960s and 1970s, the popularity of Crumb's work faded in the 1980s and 1990s, when his style was overshadowed by emerging composers such as Phillip Glass. In the April 1995 issue of Commentary, Terry Teachout wrote, "A quarter century after the fact, it is hard to remember how often Crumb's music used to be played, or why it once sounded so fresh and original; Black Angels now comes across as hopelessly thin in inspiration, a mere skeleton of spectacular instrumental effects without any connective music fabric."

Among the numerous grants, awards, and commissions he received were the following: Fulbright Fellowship (1955-1956); BMI prize in composition (1957), for the string quartet (1954), and the Sonata for cello solo (1955); Rockefeller Foundation grant (1965); Guggenheim Foundation fellowships (1965, 1971); Koussevitzky Foundation grant (1966) for Madrigals, Books I and II; election into the National Institute of Arts and Letters (1967); Pulitzer Prize in Music (1968) for Echoes of Time and the River; Elizabeth Sprague Coolidge Foundation Commission (1970) for Ancient Voices of Children; and From Music Foundation Commission (1974) for Makrokosmos III. Honorary doctorates were awarded him by Norris Harvey College, Marshall University, and Oberlin College. In 1967 Crumb was elected to the National Institute of Arts and Letters.

In his book, American Composers, David Ewen quotes Crumb on his life's work: "Music is tangible, almost palpable, and yet unreal, illusive. Music is analyzable only on the most mechanistic level; the important elements—the spiritual impulse, the psychological curve, the metaphysical implications—are understandable only in terms of the music itself."

Several of Crumb's works are settings of the poems of Lorca.

Steve Reich , Reich, Steve Composer Like Philip Glass, John Adams, and Terry Riley, Steve Reich belongs to a group of composers known as “minimalists,” who write m… Toru Takemitsu , composer Western art music from the mid-twentieth century onward has often greatly benefitted from Eastern influences. Various composers have feature… Ellen Taaffe Zwilich , Ellen Taaffe Zwilich (born 1939) was a highly regarded American composer who received the Pulitzer Prize for Music in 1983 for her Symphony No. 1 (Th… Aaron Copland , Copland, Aaron Composer “To a composer, music is a kind of language,” I Aaron Copland opens the first volume of his autobiography, Copland: 1900 Thro… John Cage , Composer John Cage is undeniably one of the most important composers of the twentieth century. He has broadened the definitions of music to include a… Christian Von Wolff , Wolff, Christian Christian Wolff Composer, pianist French-born American composer Christian Wolff helped establish a movement in contemporary classica…