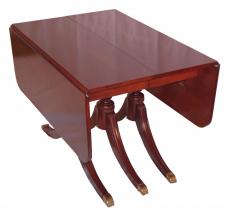 Duncan Phyfe (1768-1854), Scottish-born American cabinetmaker, was one of the best-known and finest furniture makers in the United States.

Duncan Phyfe was born at Loch Fannich. He probably served an apprenticeship as a cabinetmaker. The Phyfe family emigrated to Albany, N.Y., in 1783 or 1784, where the father opened a cabinetmaking shop. Duncan soon went to New York City; he is listed in the New York Directory for 1792. He eventually settled on Partition (later Fulton) Street, buying additional property as his business expanded. His high-quality furniture was very much in demand in New York and Philadelphia. It is also believed that he had agents in the South.

Phyfe carried on the business under his own name until, in 1837, it was changed to Duncan Phyfe and Son. Ten years later, because he had amassed a great fortune, he decided to discontinue the business and sold the entire stock on hand at auction. Upon retirement he lived in the house on Fulton Street until his death in 1854.

European furniture pattern books were available to both Phyfe and his patrons at the outset of his career. His early work shows a fondness for the designs of Thomas Sheraton. Next he came under the influence of the French Directoire style and, a bit later, the Empire style, two influences which have come to be considered the most characteristic of his work. In the period between 1837 and 1847, the Phyfe firm produced heavy plain furniture which in no way had the style or quality of his earlier works.

Reddish mahogany from Cuba and Santo Domingo was greatly favored by Phyfe at the beginning of his career. He paid as much as $1, 000 for a single log and personally supervised the cutting of the veneers. Much of Phyfe's fame as a cabinetmaker was based on his artistic use of veneers. His other chief decorative devices were turning, reeding, and carving. After 1830 much of the furniture was made of rosewood. Phyfe summed up the quality of the late work with the phrase "butcher furniture." His furniture was expensive in its day; bills dated 1816 indicate that a "piece" table cost $265 and a sofa $122.

In addition to developing an individual style and producing high-quality workmanship, Phyfe introduced the factory method into American cabinetmaking. From the apprenticeship system, with no division of labor, he evolved a system where individual craftsmen performed specific duties. All of the work was executed, however, under Phyfe's supervision, and his personal genius was largely responsible for the excellence of his furniture.

The best work on Phyfe is Nancy McClelland, Duncan Phyfe and the English Regency, 1795-1830 (1939). A biography and analysis of his furniture are in Charles O. Cornelius, Furniture Masterpieces of Duncan Phyfe (1922). A sketch of Phyfe's life and work is in Ethel Hall Bjerkoe, The Cabinetmakers of America (1957). □

Quality Of Life , Before the 1970s, quality of life received little attention in the medical or public health literature, but since then the situation has been reverse… Quality Circles , A quality circle is a participatory management technique that enlists the help of employees in solving problems related to their own jobs. Circles ar… Style , STYLE A general term that primarily means a way of doing things, with additional senses such as doing them appropriately, doing them well or badly, d… Margaret Rudkin , During an era when being a housewife was considered the appropriate goal of a woman, Margaret Rudkin (1897–1967) achieved acclaim as one of the most… Lilly Dache , American millinery designer Born: Béigles, France, circa 1904; immigrated to New York, 1924. Education: Left school at 13. Family: Married Jean Despr… James Bruce Llewellyn , Llewellyn, J. Bruce 1927– Business executive J. Bruce Llewellyn’s career history might be viewed as a virtual microcosm of twentieth-century minority…