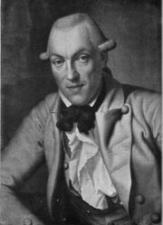 oxford
views updated
Müntz, Johann Heinrich (1727–98). Artist of German-Swiss origin, who had served as an engineer in the French army. He arrived in England in 1755 and was taken up by Richard Bentley (1708–82—who designed (1751–61) various elements in Horace Walpole's Strawberry Hill, Mddx., and recommended Müntz to carry out work there, which included the painted ceiling of the China Closet and several Gothick features). It was through Bentley (who designed a ‘Gothic Cloister’ for him) that Müntz created an octagonal Gothick room for Richard Bateman (d. 1774) at The Grove, Bateman's ‘half Gothick, half Attic, half Chinese, and completely fribble’ villa in Old Windsor, Berks. (1761–2). Müntz prepared (1762) designs for an ‘Egyptian’ (actually Gothick with Egyptianizing figures) room at Marino, near Dublin, for James Caulfeild (1729–99), 4th Viscount (from 1734) and 1st Earl (from 1763) of Charlemont, but this does not seem to have been realized, although he made further designs for Caulfeild in 1768. At Kew Gardens he was responsible for the ‘Gothic Cathedral’ (c.1759—demolished) and probably provided Chambers with drawings for the Moorish ‘Alhambra’ (1758—de-molished). An inventive master of the exotic, he proposed (1760) to publish A Course of Gothic Architecture which, if it had come out, would have been one of the earliest books on the subject. He designed a villa for Prince Stanisław Poniatowski (1754–1833) when in Poland (1778–85), and finally settled in Kassel, Germany, where he recorded the gardens, etc. at Wilhelmshöhe, and eventually died.