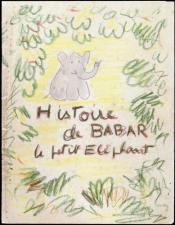 Often considered the father of the modern picture book, Jean de Brunhoff (1899-1937) is best known as the creator of Babar the elephant, one of the most beloved characters in twentieth-century juvenile literature. Lauded as an artist and writer of exceptional talent, Brunhoff is praised for creating classic works that have been popular with children and adults around the world.

Brunhoff wrote and illustrated six stories about Babar and an alphabet book featuring the character. Throughout the series, the author depicts important events in Babar's life-his birth, the loss of his mother, his journey to the city, his education, his return home, his marriage, his coronation, the birth of his children, and the development of his kingdom-in what is considered a warm and believable manner. The Babar books are often noted for reflecting the personal life and philosophy of their creator. At the time of their publication in the 1930s, the stories were considered unique and even revolutionary. They were originally published as oversized volumes with the text printed in cursive writing and the watercolor and line paintings in spacious double-page spreads. This format led children to immerse themselves in the books. Brunhoff wrote his works in straightforward yet poetic prose and illustrated them in bright colors and economic line. He is often praised for the expressiveness and detail of his pictures as well as for his creative use of the double-page spread. Although some observers criticize Brunhoff for including death, war, nightmares, and other unpleasant facts of life in books for children, most view him as a writer and artist whose works have provided the world with one of its most memorable fictional characters.

In Three Centuries of Children's Books in Europe, Bettina Hurlimann called the author's life "inseparable from his books" and several critics believe that Babar is Brunhoff's characterization of himself. Born in Paris, on December 9, 1899, Brunhoff was the fourth and last child of Maurice de Brunhoff, a successful publisher, and his wife Marguerite. Jean attended Protestant schools, including the prestigious L'Ecole Alsacienne.

After graduation, Brunhoff joined the French army at the end of World War I and reached the front lines when the war was nearly over. Deciding to become a professional artist, he studied painting with Othon Friesz at the Acadamie de la Grand Chamiere in Montparnasse, producing landscapes, portraits, and still lifes that are thought to foreshadow his Babar books. In 1924, Brunhoff married Cecile Sabourand, a talented pianist from a Catholic family. The couple had three sons: Laurent, born in 1925; Mathieu, born in 1926; and Thierry, born in 1934.

In 1930, Cecile de Brunhoff invented a bedtime story about a little elephant to amuse four-year-old Matthieu, who was ill. Matthieu and Laurent related the tale to their father, who named the elephant, illustrated the tale, and expanded it into a book. Historie de Babar, le petit elephant was published in 1931. It appeared in English as The Story of Babar the Little Elephant in 1933. The immediate success of the book prompted Brunhoff to create more stories about Babar and his family, as well as a concept book featuring the characters: The Travels of Babar, 1934; Babar the King, 1935; ABC of Babar, 1936; Zephir's Holidays, 1937; Babar and His Family, 1938; and Babar and Father Christmas, 1940. The popularity of his books prompted Brunhoff's commission to decorate the children's dining room of the ocean liner Normandie with paintings of Babar.

In the early 1930s, Brunhoff learned that he had tuberculosis. His illness forced the artist to spend long periods of time in a Swiss sanitorium. The Babar books are often considered a vehicle for the author to share himself with his family. Brunhoff died in Switzerland on October 16, 1937, at the age of 38. Ten years after Brunhoff's death, his eldest son Laurent revived the series with works of his own. Since that time, he has published more than 50 Babar books in several formats.

Reviewers are nearly unanimous in their assessment of Brunhoff as one of the most successful authors of children's literature. His contemporaries praised the freshness of his conception and the effectiveness of its execution. Writing in the Spectator, John Piper called him "Edward Lear's closest neighbour," adding that Brunhoff "had that power of careful observation that allowed him again and again to hit on ideas so simple and obvious that nobody has thought of them in that way before, although everybody wishes they had." Eleanor Graham of the Junior Bookshelf claimed, "Unquestionably, one man's whole genius went to the making of these books, his whole artistic skill, the full weight and strength of his personality, and all the wit and wisdom of his adult mind." In his introduction to The Travels of Babar, author A. A. Milne, himself the creator of another icon of childhood, Winnie-the-Pooh, noted, "If you love elephants, you will love Babar and Celeste. If you have never loved elephants, you will love them now. If you who are grown-up have never been fascinated by a picture book before, then this is the one which will fascinate you." Milne ended by saying, "I salute M. de Brunhoff. I am at his feet."

Contemporary reviewers comment on the cultural, political, and sociological characteristics of Babar's kingdom, while noting Brunhoff's artistry and the classic status of the series. Roger Sale, writing in his Fairy Tales and After: From Snow White to E. B. White, offered that the Babar stories "rightly rank with the Beatrix Potter books as the best ever made for very young children." In his introduction to Babar's Anniversary Album, a collection of three tales by Jean de Brunhoff and three by Laurent, author/illustrator Maurice Sendak wrote, "Babar is at the very heart of my conception of what turns a picture book into a work of art.… Beneath the pure fun, the originality of style, and the vivacity of imagination is a serious and touching theme: a father writing to his sons and voicing his natural concern for their welfare, for their lives … Jean's bequest to his family, and the world, shines from the books." In her biography of the Brunhoffs, Jean and Laurent de Brunhoff: The Legacy of Babar, Ann Meinzen Hildebrand concluded, "Whatever success and popularity Babar stories have today … is ultimately due to Jean de Brunhoff's creative genius and fatherly intelligence, bequeathed to a world of readers and, fortunately, to a son who could also make picture books."

Fairy Tales and After: From Snow White to E. B. White, Harvard University Press, 1978.