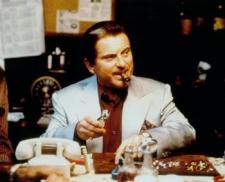 I'm Dancing as Fast as I Can (Hofsiss) (as Roger); Dear Mr. Wonderful (Ruby's Dream) (Lilienthal) (as Ruby Dennis)

Once upon a Time in America (Leone) (as Frankie Monaldi); Tutti dentro (Put 'Em All in Jail; Everybody in Jail) (Sordi) (as Corrado Emilio Parisi)

Man on Fire (Chouraqui) (as David)

To date, two roles have defined Joe Pesci's screen career. Both came in films directed by Martin Scorsese, and in each he plays variations of the same character: a pint-sized New Yorker who is hilariously foul-mouthed and invariably in-your-face.

The first is Raging Bull, in which he earned celluloid stardom and a Best Supporting Actor Oscar nomination. For years, Pesci had been struggling to establish himself in the entertainment industry as an actor, stand-up comic, and singer. Prior to Raging Bull, his sole previous screen acting had been in Death Collector, a low-budget crime melodrama in which he is billed as "Joseph" Pesci. When Scorsese cast him, he had retired from show business and was managing a restaurant in the Bronx. Pesci plays Joey, the ill-bred brother-manager of boxer Jake LaMotta (Robert De Niro). The latter is an inarticulate, irrationally jealous man, who throughout the course of the story self-destructively alienates himself from his loved ones, including his brother. Pesci proved himself more than up to the challenge of playing an important role in a high-powered movie which became an instant classic among biopics and boxing dramas. If Scorsese and De Niro won the lion's share of credit for the success of Raging Bull, Pesci (along with Cathy Moriarty, cast as LaMotta's wife) earned an entree into the celluloid main arena.

Nevertheless, in the decade between Raging Bull and GoodFellas, his second film with Scorsese, Pesci's screen career floundered. None of his roles during this period was memorable; his best was in the little-seen Dear Mr. Wonderful, playing a character not unlike the pre- Raging Bull Joe Pesci: Ruby Dennis, a man who has show business aspirations but finds himself operating a bowling alley-nightclub in New Jersey.

Pesci had failed to fulfill the potential he exhibited in Raging Bull. But he was back in full force in GoodFellas—again with De Niro—and his work here not only thrust him into starring roles but earned him the Best Supporting Actor Oscar. GoodFellas is a tough, knowing, based-on-fact gangster epic, depicting the evolution of life in the New York Mafia for a quarter-century beginning in the mid-1950s. The primary character is Ray Liotta's Henry Hill, a young guy "from the neighborhood" who yearns to be a wiseguy, with De Niro playing James Conway, Hill's mentor. Pesci's role is strictly a supporting one, on hand to inject the film with a vivid dose of local color. He offers a graphic, scene-stealing performance as Tommy De Vito, a quick-tempered hoodlum. Tommy is no by-the-numbers mob executioner. He is a psychopath who savors being a gangster, and is obsessed with his machismo; he sticks a switchblade in the gut of a rival with the same emotion he would invest in sticking a carving knife in a Thanksgiving turkey. GoodFellas differs from Raging Bull in that Pesci is not overshadowed by De Niro, perhaps because the latter's role is neither the showiest nor the most important in the film.

Pesci was to prove equally adept at playing urban types who are comical rather than sinister. This certainly is the case in the Home Alone films, in which he is cast as Harry, one of a pair of street slime who tangle in cartoon-violent fashion with a young, resourceful boy (Macauley Culkin); and in Lethal Weapon 2, Lethal Weapon 3, and Lethal Weapon 4, in which he plays annoying but likable Leo Getz, a profanity-spewing runt who is perfectly described by the character played by Mel Gibson as having "a B.S. in b.s." Here, according to a Variety critic, Pesci is allowed to showcase "his unique ability to go absolutely ballistic in rat-a-tat fashion." The actor gave what was perhaps his best post-GoodFellas performance in My Cousin Vinny, cast in a role he was born to play: Brooklyn "lawyer" Vincent La Guardia Gambino, who heads way out of his element—to the Deep South—to defend his cousin and a friend who have been falsely accused of murder. If you grew up in an Italian-American neighborhood in Brooklyn you knew guys like Gambino, a hopelessly uncouth but nonetheless persistent and thoroughly engaging character who wears his accent on his sleeve.

Pesci also brought a creepy presence to JFK, cast as alleged Kennedy assassination conspirator David Ferrie, and had one of his most sympathetic roles in The Public Eye, playing a Weegee-like 1940s tabloid newspaper photographer. In Casino, his third film with Scorsese, he virtually repeats his GoodFellas characterization, playing Nicky Santoro, another ballsy mobster who is as short-fused as he is short in stature. Nicky's turf is Las Vegas, rather than New York. He is sent there by the "bosses" back east to be the muscle behind Robert De Niro's casino manager, and he eventually builds himself into the town's most powerful enforcer. Nicky relishes being a gangster. No matter how big a guy is, Nicky will fearlessly take him on and beat him up. Pesci's acting is letter-perfect, but one cannot escape the fact that Nicky Santoro is a virtual clone of Tommy De Vito.

Playing Tommy De Vito may have earned Pesci star stature, but more often than not his starring films—The Super (playing a New York City slumlord), With Honors (a homeless man), Jimmy Hollywood (a Tinseltown wannabe), 8 Heads in a Duffel Bag (a mob hit man), and Gone Fishin' (a vacationing fisherman)—have been undistinguished. Will he ever find a third (or fourth, or fifth) great role to rival the ones he played in Raging Bull and GoodFellas?

Career: Actor. Child actor on stage in New York City; singer and guitarist with Joey D and the Starliters; performed with Frank Vincent and the Aristocrats; standup comedian and lounge singer as Joey Cannon, Jonathan Marcus, and Joey Prima; performed as voice of the Brooklyn Bridge in a television commercial for Lexus; appeared in other commercials, including ads for Pepsi soft drinks and SBC telephone services. Amici's (restaurant), Bronx, NY, worked as manager; also worked for a stone mason and an answering service and as a postal worker, produce manager, and truck driver.

Corrado Emilio Parisi, Tutti dentro (also known as Everybody in Jail and Put 'em All in Jail), CDE, 1984.

Frankie Monaldi, Once Upon a Time in America (also known as C'era una volta in America), Warner Bros., 1984.

(Uncredited) Leo Carelli, Catchfire (also known as Backtrack and Do It the Hard Way), Vestron Video, 1988.

Himself, A Galaxy Far, Far Away, MorningStar Productions, 2001.

Tony Bennett: An All-Star Tribute—Live by Request, Arts and Entertainment, 1998.

"The Films of Martin Scorsese," The Directors, Encore, 1999.

Appeared in a Broadway production, The New Vaudevillians.

(In archive footage) Getting Made: The Making of "GoodFellas," Warner Home Video, 2004.

Under the name Joe Ritchie, recorded the album Little Joe Sure Can Sing, in the 1960s.