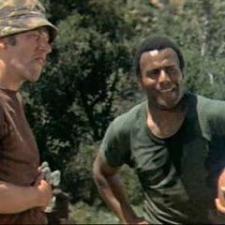 Jefferson Bolt, That Man Bolt (also known as Thunderbolt and To Kill a Dragon), Universal, 1973.

Hammer, Fist of Fear, Touch of Death (documentary; also known as The Dragon and the Cobra and Fist of Fear), Aquarius, 1980.

Paulie Solano, Whatever It Takes, Columbia, 1998.

Himself, The Independent, Arrow Releasing, 2000.

The Messenger (also known as Il messagaro and Kuryer), Starlight, 1987.

Fred Williamson is an actor and former professional football player who developed a successful film career by writing, producing, and directing many of the films in which he performed. After several seasons as a defensive player on such teams as the Oakland Raiders and the Kansas City Chiefs during the 1960s, Williamson won a role in the groundbreaking television series Julia and in such films as M*A*S*H. He worked steadily in the United States and abroad, becoming known for black action films during the 1970s, and he built a thriving production company outside of mainstream Hollywood. Looking back on his career in 1996, Williamson told Entertainment Weekly, "My career never stopped. I learned the business of the business, and I was able to continue doing the things I wanted to do."

Williamson was born on March 5, 1938, in Gary, Indiana. He was a talented athlete in his youth and played football for Froebel High School, performing well enough to win offers to play for a number of collegiate teams. Williamson chose to attend Northwestern University in Evanston, Illinois, where he became a star player under the leadership of coach Ara Parseghian, while completing a degree in architectural engineering. After graduation in 1960, Williamson was drafted by the San Francisco 49ers of the National Football League but was traded before the start of the season to the Pittsburgh Steelers.

From 1961 through 1964 Williamson played for the Oakland Raiders of the American Football League, where he became one of the team's leading defensive backs and was given the nickname "Hammer" for his tackling ability. Williamson also gained media attention for his custom-tailored uniform and signature white shoes. "Back in football, I was the first player to wear white shoes," Williamson said in an interview with Mal Vincent in the Virginian-Pilot. "When I got the nickname ‘The Hammer,’ I had a hammer painted on my arm. They fined me $500 a game for promoting violence. I knew what I was doing. All that is marketing."

Williamson was traded to the Kansas City Chiefs in 1965, and he remained with the team for four years. Among the highlights of Williamson's football career was his participation in the first Super Bowl in 1967, where he was instrumental in generating media hype for the contest, now one of the cornerstones of sports broadcasting.

With a degree in architectural engineering, Williamson decided, after his professional football career was winding down, that he would pursue a career in architecture. He took a job at Bechtel Corporation but found the transition to a traditional profession difficult. "Well, 9 to 5 just didn't suit me," he told interviewer Rebecca Murray of About.com. "Once I stopped playing football, an hour for lunch, 9 to 5, couldn't handle it."

Williamson made his acting debut in 1968 in an episode of the television series Ironside and found that he enjoyed the creative challenge and the lifestyle of acting. Williamson next landed a recurring role as the boyfriend of Diahann Carroll on the television series Julia. "One night I was watching TV and saw the Julia show. I noticed the guest star was always her boyfriend," Williamson told Murray. "I said, ‘I'm better looking than those guys.’ So I drove to Hollywood." Williamson convinced the producers of Julia that the audience did not want to see Carroll with a new love interest every week and sold himself as a candidate to play the boyfriend. Williamson appeared in the series until it was cancelled in 1971, by which time he was being offered additional roles in film.

In 1970 Williamson performed in Robert Altman's classic film M*A*S*H, as Captain "Spearchucker" Jones, a role that allowed him to showcase his comedic talent. That same year he appeared in Tell Me You Love Me, Junie Moon alongside Liza Minnelli and had the opportunity to work with legendary director Otto Preminger. Williamson would later credit his experiences with Preminger and Altman as his inspiration to pursue his own production projects, beginning in the 1970s.

In the early 1970s a new genre emerged in Hollywood aimed at urban, African-American audiences and later known as "blaxploitation" for its often stereotypical depictions of African Americans as criminals and pimps. Despite the somewhat derisive nature of the blaxploitation fad, hundreds of African-American actors found work during the 1970s and 1980s thanks to the popularity of the genre, which began with the release of the 1971 film Shaft, starring Richard Roundtree. During the early 1970s Williamson became one of the most recognizable actors in the genre, appearing first in the 1972 action film The Legend of Nigger Charley. Over the next ten years, Williamson appeared in more than a dozen low-budget action films, including Hell Up in Harlem in 1973, Take a Hard Ride in 1975, and 1990: The Bronx Warriors in 1983.

In 1974 Williamson and his wife, Linda, formed their own production company, Po' Boy Productions. After spending time studying the technical aspects of film-making and directing, Williamson began a new stage of his career as a director and producer, starting with the 1975 action film Boss Nigger. The following year Williamson scored a minor hit with the comedy western Adiós Amigo, which also featured Richard Pryor and James Brown.

In the mid-1980s the market for low-budget action films declined in the United States, but Williamson shifted his operations to Europe and continued to write and produce films in which he starred. "When the so-called ‘black exploitation’ movies came to an end in the United States, I went to the European market," Williamson told Vincent in 1996. "I've been there ever since."

Williamson produced films in the United Kingdom, Italy, and Canada, teaming with other production companies and releasing his films to a worldwide video rental audience. While American audiences saw Williamson as a blaxploitation actor, Williamson told Vincent the situation was different in Europe. "In Europe, my films play wherever Stallone and Schwarzenegger movies play," he said. "Here, they go directly to video, and do quite well. I find that they don't have to play in theaters first in order to do well."

In 1996 directors Quentin Tarantino and Robert Rodriguez invited Williamson to play a major role in the horror/action film From Dusk till Dawn alongside George Clooney, Juliette Lewis, and Harvey Keitel. Although some considered the film a comeback performance for Williamson, he maintained that his career was simply changing rather than beginning again, and pointed to a catalog of more than thirty films as evidence that he had never left the industry.

Shortly after the release of From Dusk till Dawn, Williamson teamed with a number of stars from the blaxploitation films of the 1970s, including Jim Brown and Pam Grier, for Original Gangstas. Williamson later criticized the work of director Larry Cohen on the film, though it was a moderate commercial success and helped Williamson to publicize his production efforts. Williamson continued directing and producing action films throughout the 1990s and performed in works by others, including the 1998 film Blackjack, directed by the legendary Japanese action filmmaker John Woo. In 2004 Williamson featured his comedic talents in the film Starsky & Hutch alongside Snoop Dogg, Ben Stiller, and Owen Wilson.

Through the course of his career Williamson diverged very little from his roots, preferring to remain focused on the action genre. He made prescient business and marketing decisions that allowed him to remain relevant in an evolving media market. As of 2008 Williamson's production company had released more than forty films. From being one of the most colorful players in professional sports to a film veteran, Williamson helped to define a generation of African-American entertainment.

Films; as actor unless otherwise indicated

(And director, producer, screenwriter) No Way Back, 1976.

(And director, screenwriter) The Last Fight, 1983.

(And director, producer, screenwriter) The Messenger, 1986.

Additional information for this interview was conducted through an interview with Williamson's manager, Stephany Hurkos, on March 19, 2008.