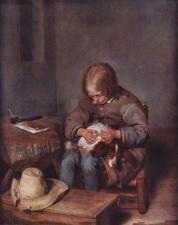 Gerard Ter Borch was born in Zwolle. His first teacher was his father, Gerard Ter Borch the Elder, who in his youth had spent some years in Rome and returned with drawings he had made as well as some he had collected in Italy. The son precociously revealed his gifts as a draftsman, as shown in his drawing of a man on horseback (1625).

Ter Borch traveled widely. In 1634 he was in Haarlem, in 1635 in London, in 1640 probably in Rome. A visit to Spain is reflected in reminiscences of Diego Velázquez in the style and psychological penetration of Ter Borch's portraits. His famous portrait Helena van der Schalke as a Child (ca. 1644) calls to mind Velázquez's Infantas; the placement of the figure in palpable yet undefined space, without the indication of a floor line, is a masterful adoption of the Spanish master's invention.

Between 1645 and 1648 Ter Borch was in Münster, Germany, where he went to seek portrait commissions during the meetings that ended the 80 years of war between the United Provinces and Spain. His small group portrait Swearing of the Oath of Ratification of the Treaty of Münster is a rare example in Dutch 17th-century painting of the recording of an actual historical event. It includes more than 50 recognizable portraits. The painter asked for this work the enormous price of 6, 000 guilders. Apparently no buyer was found, for the picture was in the hands of his widow after his death. From 1654 on Ter Borch lived mainly in Deventer, where he married, became a citizen, held honorary office, and died on Dec. 8, 1681.

Ter Borch's early paintings were mainly scenes of military life, painted with great subtlety of color and values. Later he showed a predilection for small, dainty interior scenes, in which he revealed his delight in the sheen of satin and the grace of charming women. The elegance of his figures has tended to obscure the fact that in many cases they are shown as participants in situations of amatory commerce. The figures and costumes are painted with care and high finish that is not matched in the settings and backgrounds, which are often not well realized. The Music Lesson (ca. 1675) is a characteristic late example of Ter Borch's favorite subject matter. His most able pupil, Caspar Netscher, became a successful portraitist in the small-scale and fashionable tradition of his master.

John Singer Sargent , John Singer Sargent (1856-1925) was America's most technically brilliant portrait painter. His work profoundly influenced his generation. Born on Jan… George Caleb Bingham , George Caleb Bingham The American painter George Caleb Bingham (1811-1879) depicted life in Missouri around the middle of the 19th century. His best-… MINIATURE , MINIATURE MINIATURE. In Europe, about 1520, the independent miniature, or "limning," evolved from the illuminated manuscript. In eighteenth-century A… Portraiture , Representations of monks, nuns, and members of the laity flourished in East Asian and Tibetan Buddhist traditions. In pre-Buddhist Han China, portrai… Graham Sutherland , Graham Sutherland Graham Sutherland (1903-1980), the leading painter of the English neoromantic movement, was noted for his imaginative pictures base… Piero Di Cosimo , Italian painter. Born in Florence, where he lived his entire life, he trained in the workshop of Cosimo Rosselli, whose name he took as his own (his…